Just realised Too Lazy To Weed is one year old today! 13th July 2015 I first dipped my toe in the world of blogging; at the time I wasn’t sure if I had enough to share from my perspective of lazy non-gardening and wildlife watching. But as I think I said in my very first blog post – there’s something going on in the garden all the time. And if not in the garden, then there are things to discover in the wonderful countryside around us.

I started blogging on a wet Monday in mid July – one year later and it is now a wet Wednesday in mid July; the weather at least hasn’t improved over the year. A few things have progressed though – I think we’re getting better at the photography; still by no means experts, but at least producing recognisable photos (apart from some dubious bee in wall ones below). I’ve learnt how to use a Trail Camera and Bat detector and both my moth and bee identification skills have improved a bit. The garden itself is looking increasingly wild and woolly – some of the weeds are now reaching triffid proportions and we lost the greenhouse for a while until I hacked my way back to it!

A year ago I was getting all excited at the prospect of the Big Butterfly Count and this year is no different. The Big Count starts again this weekend, so I  hope the weather perks up a bit. Quite a few of the blog posts lately have been about our trips out and about, but I thought for this anniversary post I should maybe focus back on what’s going on in the garden. The butterflies have so far been few and far between, but the bees have been out in force. The lavender is at its best right now and the bees absolutely love it.

This week there was a particularly rare sighting in the Too Lazy To Weed garden – the lawnmower came out! This bee (a leafcutter) was perhaps so amazed it had to land on the wheel to have a closer look – a good excuse for me to stop work at least!

I spent a lot of time at the weekend staring at our outside wall! We have a leafcutter bee (possibly even the one on the lawnmower above) nesting in there. I’ve seen on the internet wonderful photos that people have taken of bees emerging from holes in walls – all beautifully framed and in focus. Turns out it’s not that easy to do! The bee returned every 10-15 minutes so I was all set up with my tripod pointed at the hole. As soon as the bee appeared I clicked away, convinced I’d get award winning shots. Similarly as soon as it reappeared on its way back out I snapped away again. Not one perfectly focussed photo. Bees are apparently faster than either my camera and/or me. These blurry images were the best out of about 50 photos and an hour of my life staring at a wall! 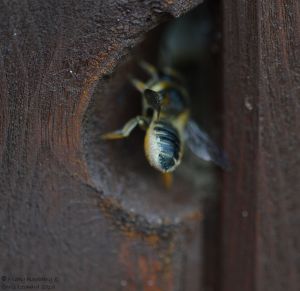 One of my other bee recording efforts recently was to try and video them visiting the flowers in our mini meadow. We get plenty of bees there, so again I foolishly thought this would be easy. I set the trail camera up pointed at the flowers and left it for the day. As usual of course I’d forgotten to factor in the wind – blowing the flowers about and triggering the camera. 400 videos later of flailing flowers and I’d realised my mistake (I should have known this would happen, having had a similar problem with the bird feeder blowing in the wind earlier in the year). Amongst the flower flapping though the camera did at least manage to pick up a few bees – here are a couple of Buff Tailed Bumblebees enjoying the nectar buffet.

So one year on and I’m still getting just as much pleasure from watching the wildlife in our garden. Apart from the benefit to the wildlife itself of keeping an organic, natural (OK messy) garden, I think both Chris and I find it beneficial to our own wellbeing. Coming home from work and watching the bees on the lavender, or the birds stuffing themselves on the birdfeeder, or the bats swooping in the evening  (even if they are after my beloved moths!) is a great way of unwinding. Maybe everyone should have a lazy garden!

2 thoughts on “One Year Older and One Year Weedier”