Over the last few years, I’ve become fascinated (some may say slightly obsessed!) with the diversity of moths we get in our very ordinary garden. For the first few years of moth trapping I concentrated on the macro moths, which as their name suggests, tend to be the larger species. As a beginner, the macro moths were a) easier to identify as they were bigger and b) easier to photograph – also because they were bigger. But this year I started to realise that I was missing out on an awful lot of moths. There are about 800 species of macro moths and probably three times as many micro moths in the UK alone.

So I’ve started trying to identify the micro moths too. At first this felt like an impossible task as many of them are really just so damn small! But once I got into them, I started to appreciate their microscopic beauty. I still find most of them to be incredibly difficult to identify though and have relied heavily on iSpot and experts on Twitter and Facebook to help me. This year to date I’ve recorded 208 species of moth in the garden of which 58 have been micros. The real number of micros present in the garden is probably much higher, but my poor ID and photographic skills have limited the results so far.

I thought it was about time I did a blog post in praise of the miniature marvels that are the micro moths. So here’s a selection of my favourites – ones that I find particularly interesting or beautiful or significant in some other way.

So first up a micro that is probably the most abundant one in our garden, thanks to the presence of our apple tree – the Light Brown Apple Moth (Epiphyas postvittana). This is actually an Australian species that was accidentally introduced to the UK and can be a pest in orchards. On one night alone in August I got 78 of these in the moth trap! 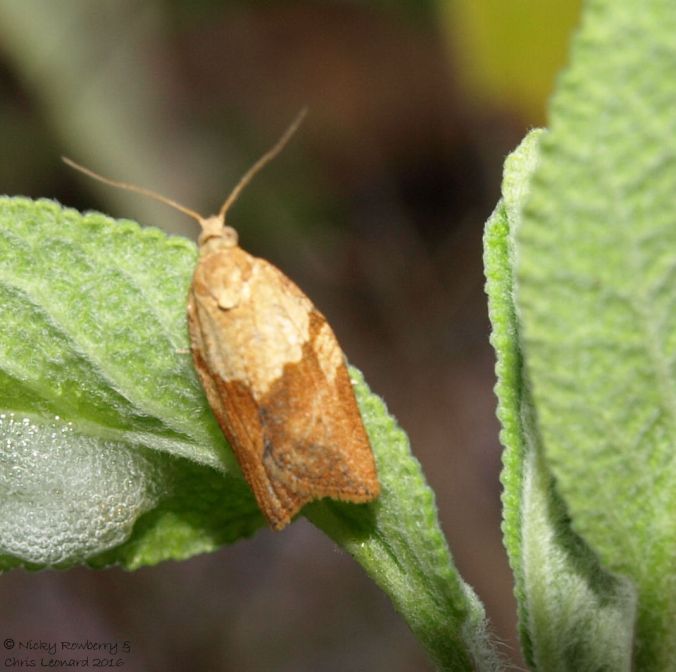 Next up another orchard pest species – the Codling Moth (Cydia pomonella). Its caterpillars feed on the apples and can ruin crops. It is such a problem that you can buy codling moth traps which use pheromones to lure the moths to their doom. As our apple tree produces way more fruit than we can eat anyway, we’re not too bothered by the presence of this moth. I’ve included it here, not because of its pest status, but because it is actually quite an attractive moth, with its coppery rear end!

While I’m on pest species, this next one is a Horse Chestnut Leaf Miner (Cameraria ohridella). The caterpillars do just what it says on the tin – they mine into the leaves of Horse Chestnut trees. The leaf mines themselves are not fatal to the trees, but they could allow diseases in which would have a greater impact. We don’t have any horse chestnut trees in the garden, nor any close by that I’m aware of; which may be why I only caught one of these this summer. They may not be a welcome addition to the UK fauna, but they are beautiful moths! 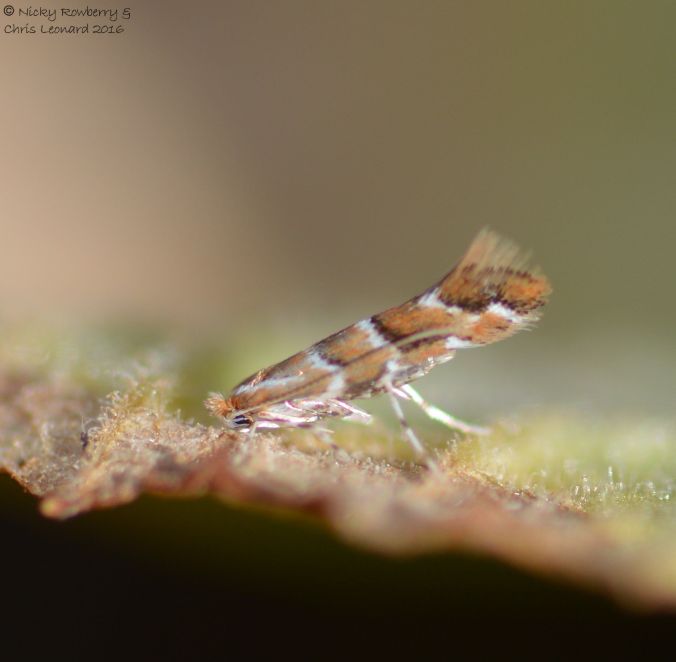 Moving away from pests, the next species is one of a strikingly unusual group of moths – the Plume moths. This one is a Beautiful Plume (Amblyptilia acanthodactyla). They have modified wings that, when not in use, are folded away into the crossbars of these T shaped moths. They seem to be quite docile moths – this one was happy to sit on my hand to be photographed.

The Twenty-Plume Moth (Alucita hexadactyla) has similar feathery plumes for wings. Despite its name, it actually has 24 plumes – each of the 4 wing consisting of 6 plumes. They are strongly attracted to lights and we often find these indoors or on the outside of our glass door if we leave the light on.

The next micro may not look very interesting, but it is a Scarce Cosmet (Mompha jurassicella). I got awfully excited about this one earlier in the year, when someone identified it for me and it turned out it was the first record for Malvern. It’s only a few millimetres long meaning it is easily overlooked, so I suspect lots of gardens around here have it too – but not all our neighbours go grovelling about in the grass looking for tiny invertebrates!

The next one I’ve included is a day-flying micro – a Mint Moth (Pyrausta aurata). This cheery looking little moth seems to like all our herbs, not just the mint – it is particularly fond of the oregano and in the summer we have lots of them fluttering around the herb bed.

The Diamond-back Moth (Plutella xylostella) is another migrant moth that each summer gets blown over from Europe. This year there were reports in the press of “plagues” of these little moths that were potentially going to “destroy our crops”! As far as I know nothing of the sort happened, but I did get quite a few in the moth trap.

This next moth didn’t look that interesting when I first caught it, it was only when I looked at the photo close up that I could see just how beautifully it was coloured. That’s the problem with such small moths – the naked eye just can’t pick up the detail! It is a Cherry-Bark Moth (Enarmonia formosana).

The Chequered Fruit-Tree Tortrix (Pandemis corylana) I like for its mosaic crazy paving patterning. It’s also got quite a distinctive shape – broad and flat, unlike most of the other moths here. 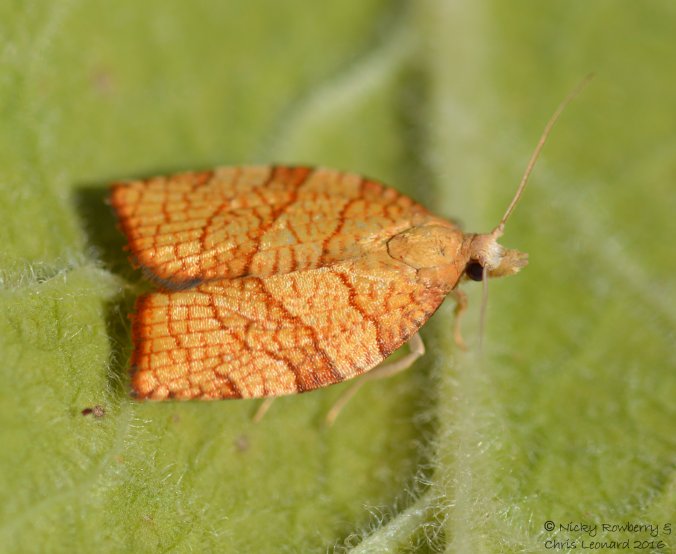 This is one of the Orchard Ermine group (Yponomeuta sp.) There are several almost identical species of these gorgeous little white moths and they can only be reliably identified if you rear them from caterpillars -which of course I’ve not done!

This little beauty is one of the Caloptilia moths. They are very hard to identify so not sure which of several species it is. But I loved the brassy gold colouration and the way it seems to be standing on tiptoe on its front legs. This was another species whose beauty was only revealed with the camera zoomed right in.

The final micro of this selection is one that is not particularly attractive or distinctive, doesn’t have an interesting life history or pest status, but is stuck with one of the worst common names – the Dingy Dowd (Blastobasis adustella). I think it must be my desire to support the under-dog that makes me root for the poor Dingy Dowd! 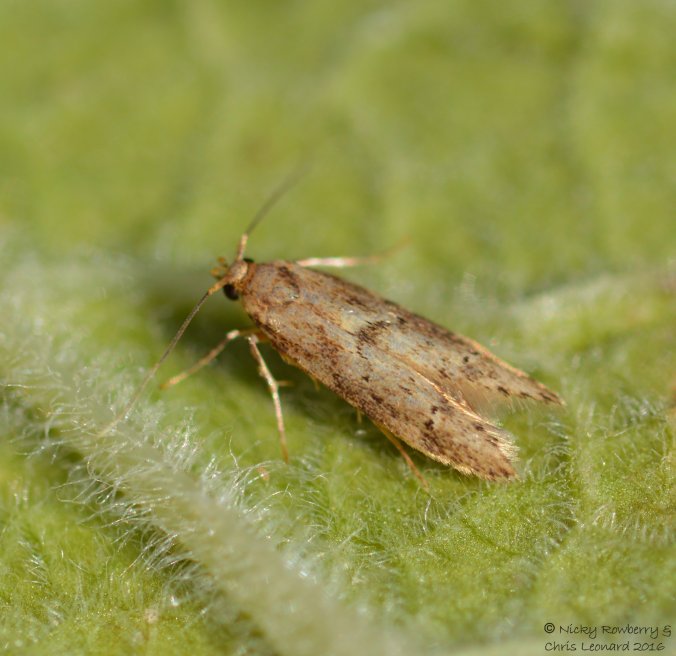