This is the third and final part of the blog about our wonderful day spent at the Wildlife Hides near Droitwich. Our last hide of the day was the Kestrel one. Once again we were a bit worried when the previous 2 groups had all seen kestrels feeding – would they be too full to fly down for us?

Initially all we could see was a very distant kestrel perched on a telegraph pole way across the field. 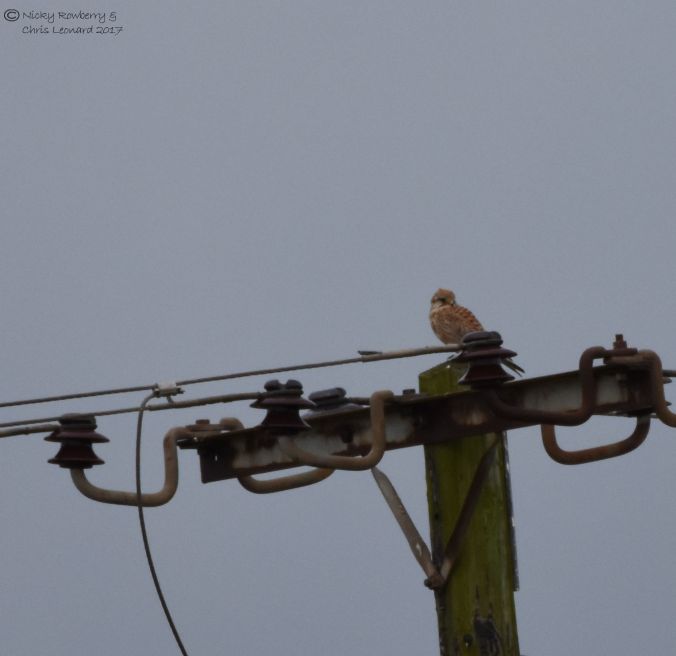 Dead mice were positioned in front of our hide, so we just had to hope she was still hungry. While we waited (with everything crossed) for her to fly down, we could at least enjoy lots of the small birds that were flitting about. The blue tits and great tits posed obligingly on a branch in front of us and a chaffinch was poking about in the mud on the field. A wagtail and an absolutely stunning bullfinch also made appearances, but we didn’t manage to get decent photos of either. 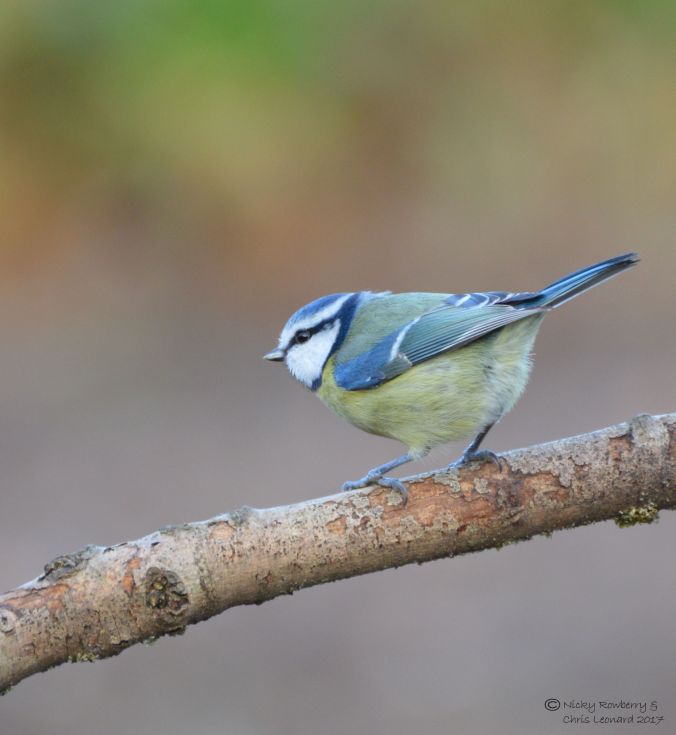 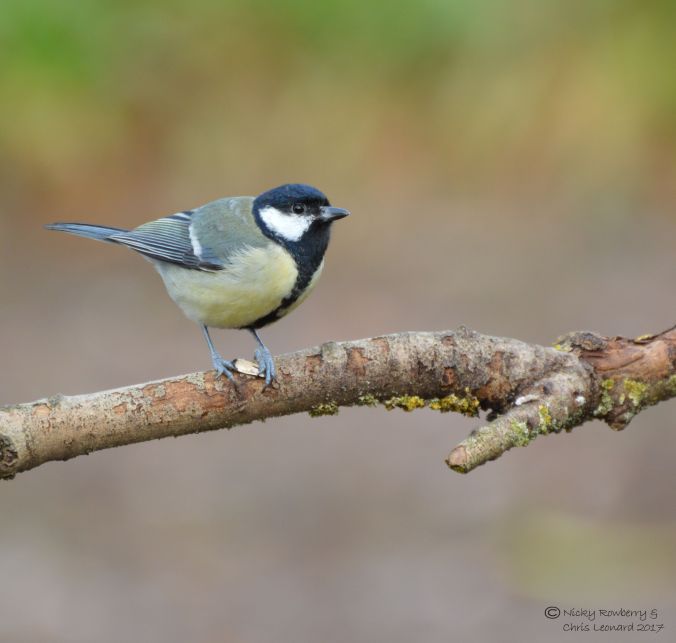 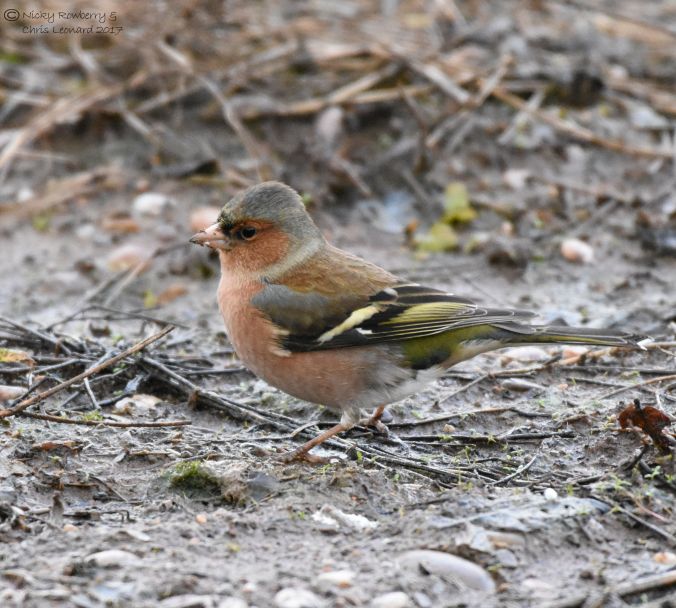 While we’d been watching the small birds, the female kestrel had been joined by the male on top of the telegraph pole. After what seemed like an age they eventually both took off and after a bit of hunting about, the female landed on one of the posts in front of us. All 3 of us clicked away frenziedly, to the point that we didn’t even notice the male had landed until it took off again – d’oh! So we only got photos of the female, but she was stunning. I’d never been so close to a kestrel before and hadn’t realised just how beautiful they were. 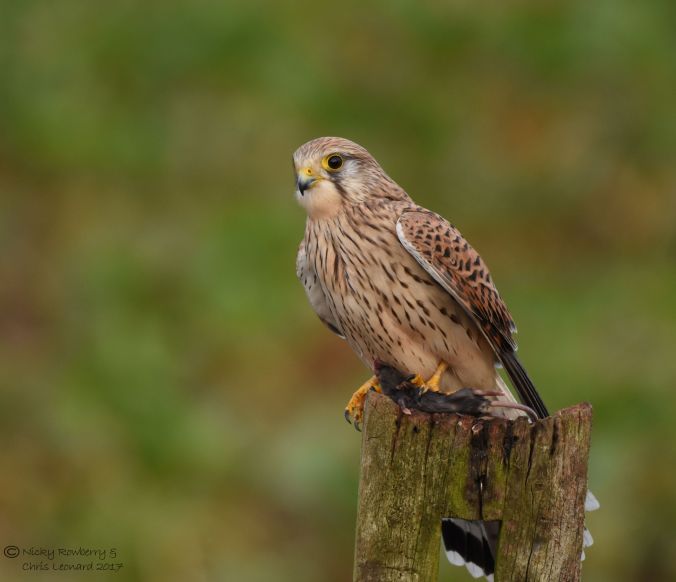 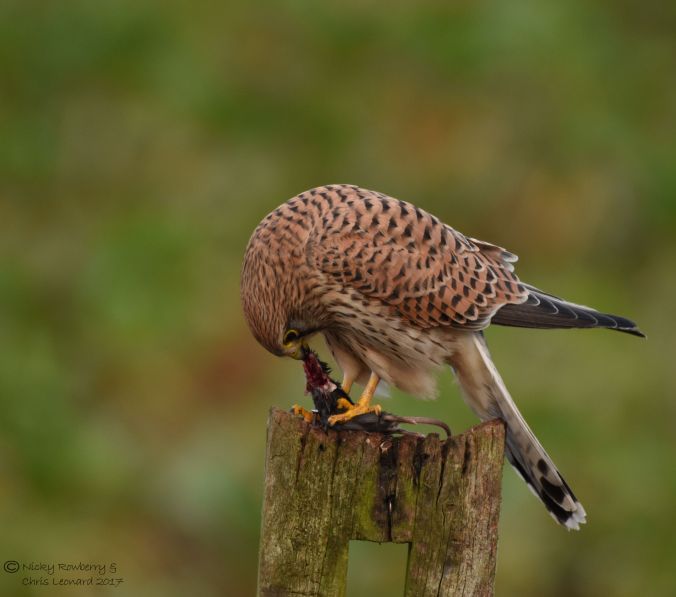 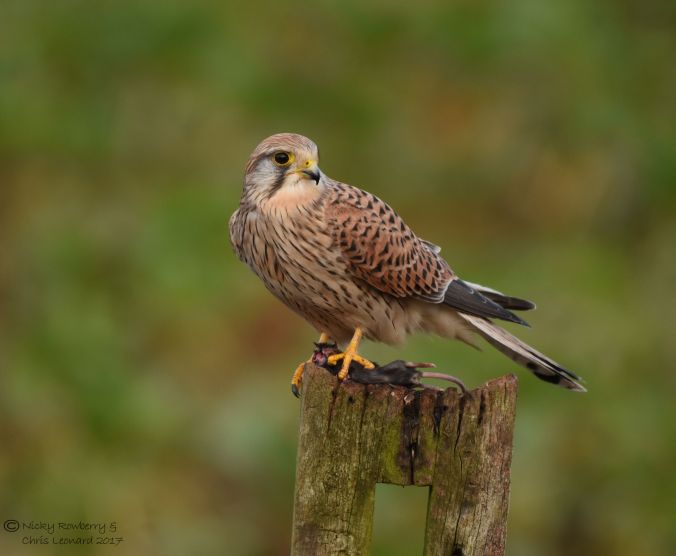 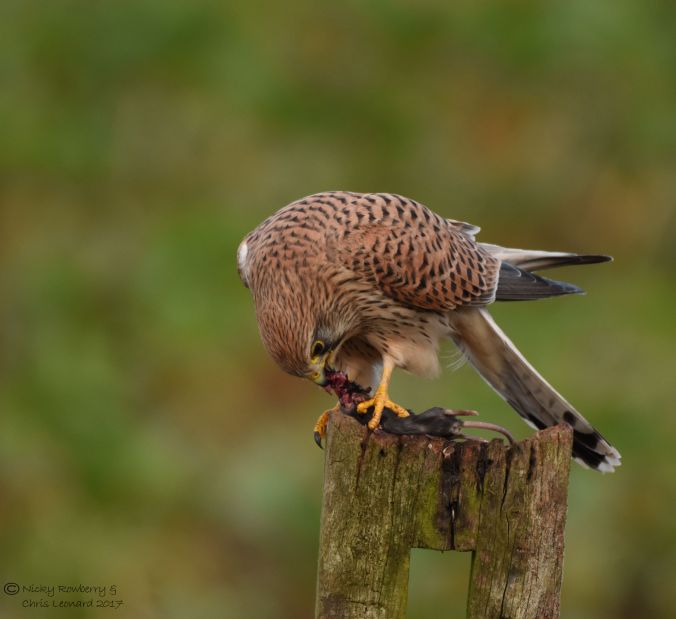 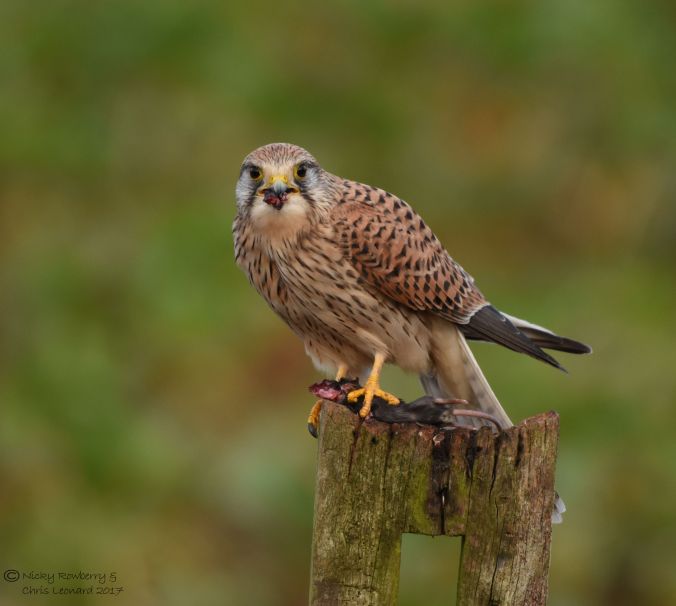 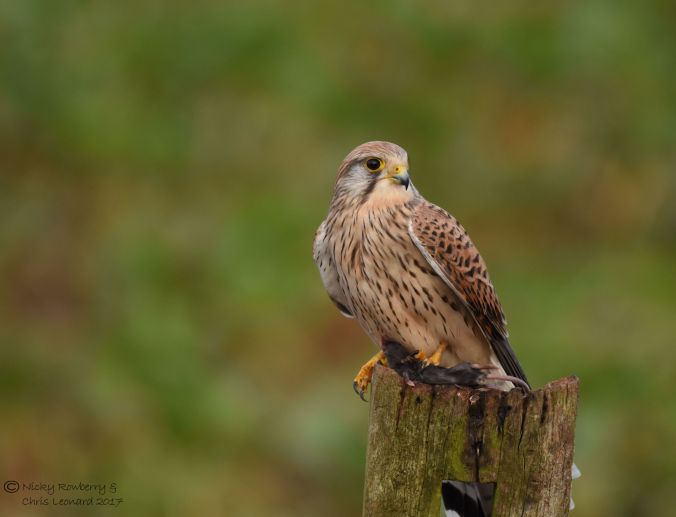 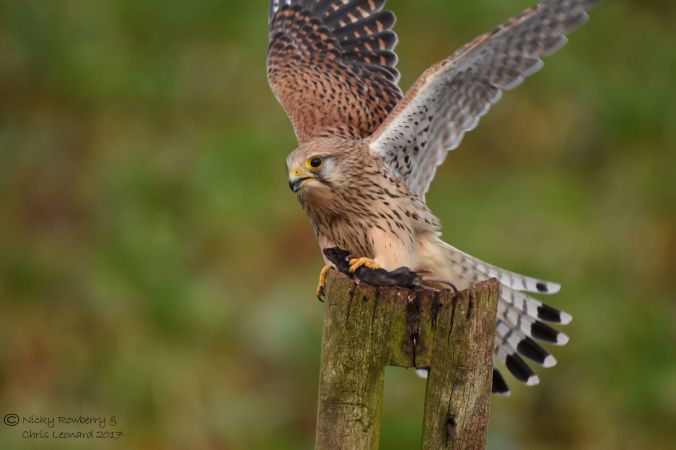 I think we made a bit too much noise and spooked her (and the male) off, but it wasn’t long before she returned. She was clearly wary of us though and decided to sit on the ground (actually on what looks like a great big turnip?) in the middle of the field for a while, probably hoping we’d go away. 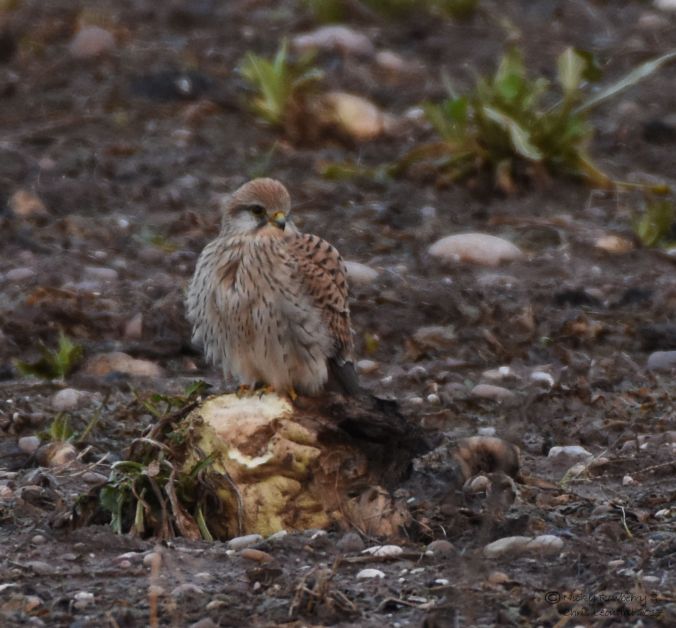 But as we stayed put in the hide and kept quiet, she decided to have another go for the mice. 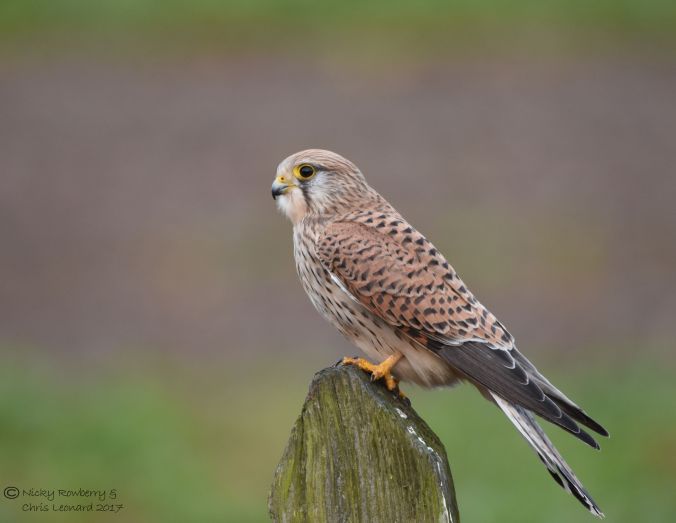 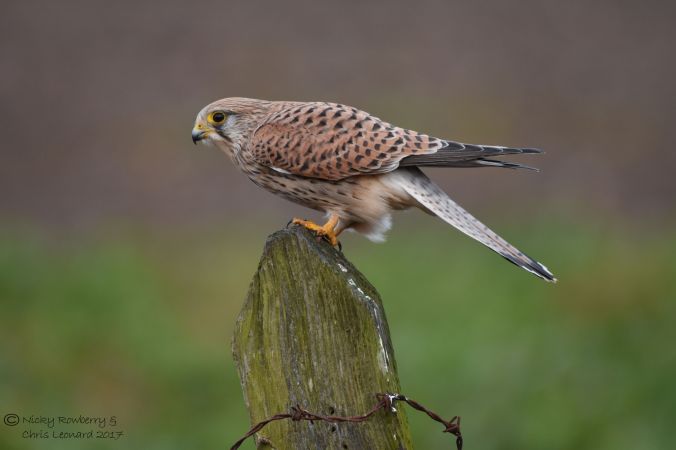 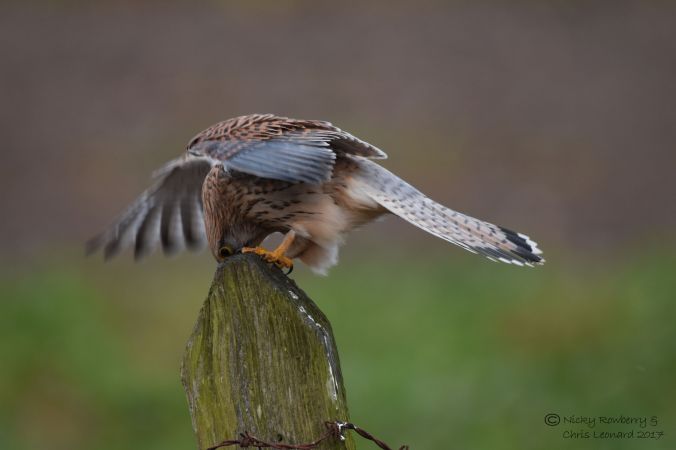 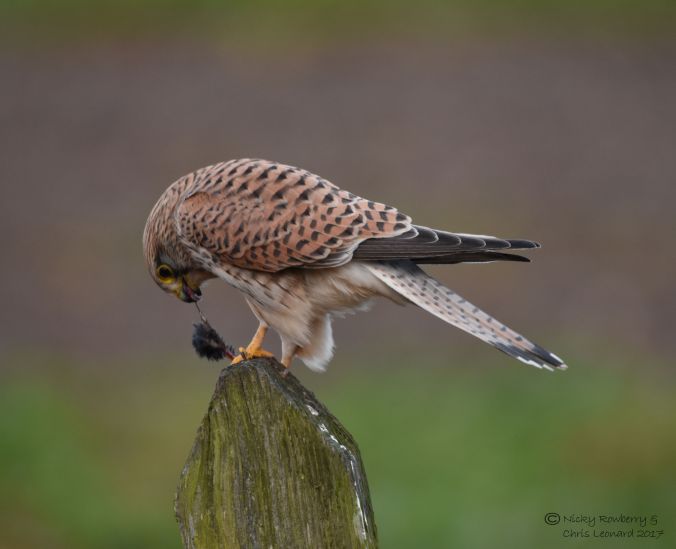 We could have happily stayed and watched the kestrels for a lot longer, but by now the light was starting to go. Before we packed up for the day though we had one final visitor – an inquisitive squirrel. I know it’s not a red one, but I still can’t resist them. 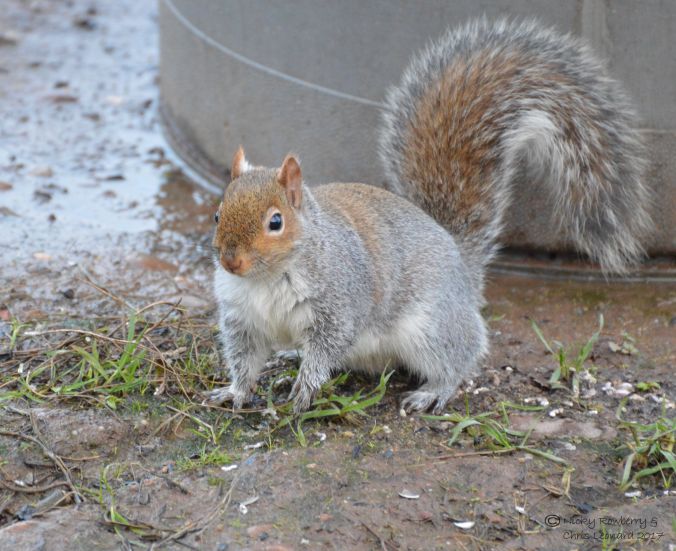 As before while Chris was taking most of the photos, I had a go at videoing. They are such beautiful birds to watch, but you get a real sense of their strength when you see her pulling at the mouse. I wouldn’t want to be at the wrong end of those claws or beak!

All the hides featured in these last 3 blog posts were at Nature Photography’s site near Droitwich, which is only a half hour’s drive from Malvern – brilliant! Other hide rental sites are no doubt available, but we were very happy with our day and couldn’t have asked for better views of the birds. If anyone’s interested in trying something like this for themselves, here’s their website: http://www.naturephotographyhides.co.uk/  They also have hides in Scotland for red squirrel and mountain hares – very tempted for next year!!

I know in an ideal world we would have gone out and found these animals for ourselves, but when you have limited time and resources, sometimes it’s good to take a short cut. The birds were all still wild and there were no guarantees of seeing anything, so it was a big thrill for us just being able to watch them. For beginners like us, it was also a good way of practising taking birdy photos – it’s very hard to practice if there’s nothing there to photograph!

One thought on “Wildlife Hides – Part 3 The Kestrel”