What a difference a day makes. Since my Evergreen blog post our Malvern landscape has been transformed into a frosty white wonderland. It snowed all day on Sunday – the most snow we’ve had in years here and temperatures have barely got above zero. For the first day we couldn’t even see the Malvern Hills – the snow and fog completely blanketed them. But yesterday it cleared and our view was once again returned. 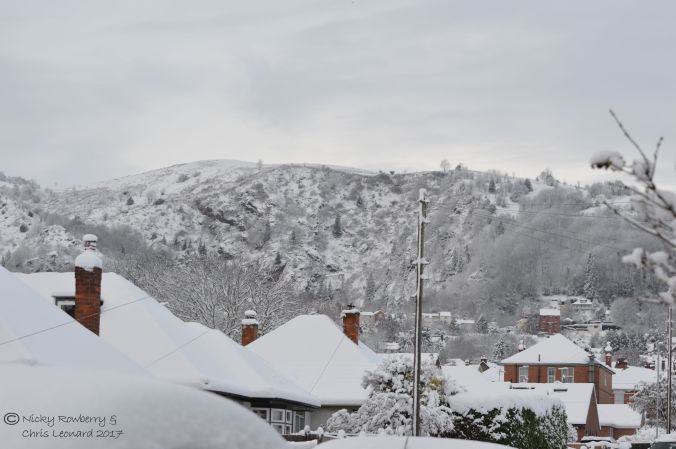 Our mistletoe, that was making me feel so festive, is now even more Christmassy with a frosting of snow.

I may not have been able to get to work, nor get the car out to go to the shops (chocolate supplies are getting dangerously low and I may have to start eating some wrapped Xmas presents!), but it has provided some great photo ops in the garden. I have spent a lot of the last few days freezing my proverbial off, sitting in the garden watching the birds. The bird feeders have needed constant topping up and the water baths have had to be defrosted regularly, but I have been rewarded with lots of bird activity.

As always I had the trail cam out in the garden. Although I didn’t get any particularly interesting footage during the day, that may have been because things were landing on it rather than in front of it!

Similarly my camouflage netting, that I hide behind to photograph the birds, got the same lack of respect from this blue tit.

Most of our regular birds came out during my snowy vigil. Starlings, sparrows and blue tits were all abundant and didn’t seem bothered by me lurking behind my camouflage. 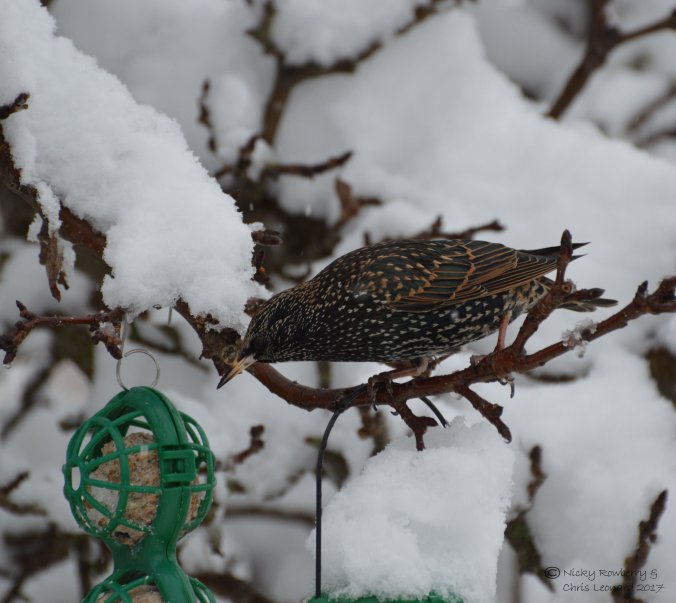 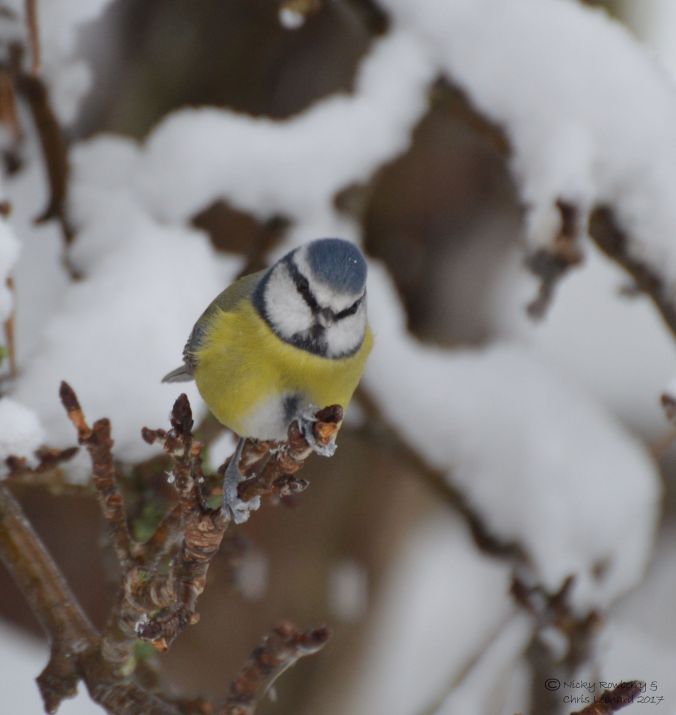 The wren was as elusive as always and the coal and great tits only came out when I went in. The blackbirds and jackdaws made the most of the food, but I struggled to get a decent photo of black birds against a white background. There were some surprises though – the benefit of sitting outside just watching meant that I saw birds I haven’t seen for a while in the garden. So it was great to see this thrush jostling for food amongst the sparrows on the bird table. 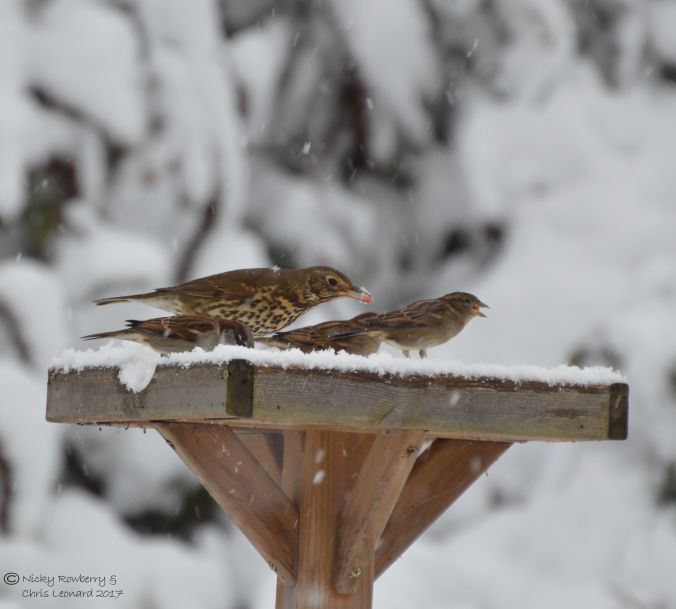 Even better a rare glimpse of a chaffinch – we hardly ever get these in the garden, so I was delighted to get even this distant shot of him.

Of course the one bird I really wanted to get decent photos of in the snow was the robin. Fortunately we have two resident robins and one in particular is pretty brave and comes close up to me (not yet managed the holy grail of getting him to eat out of my hand yet, but I’m working on it). I took loads of photos of him – here are a few of my favourites. I think next year’s Christmas cards may be sorted! 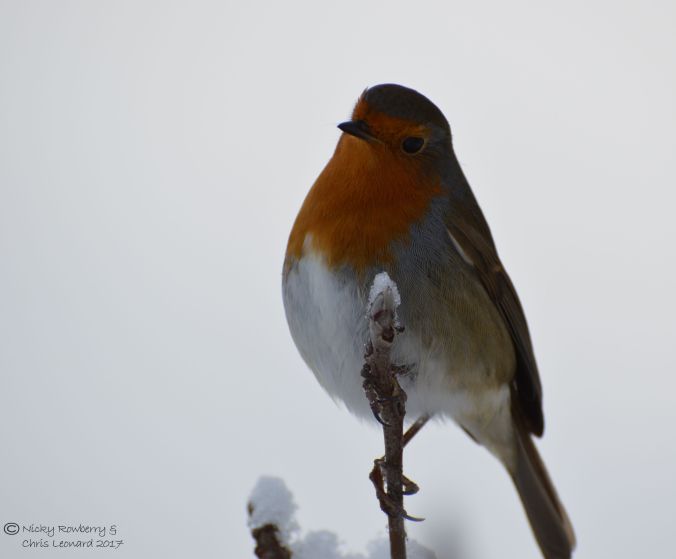 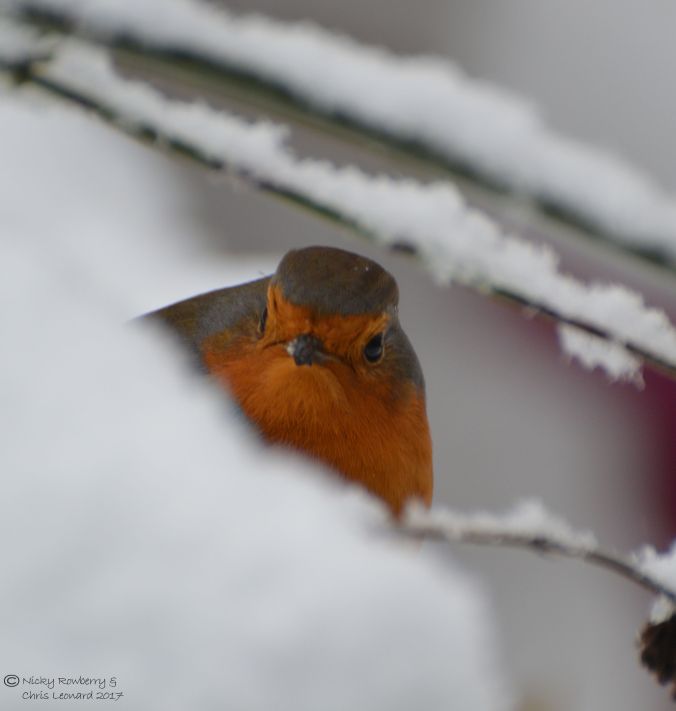 While chasing the robin round with the camera, I noticed something larger in the bush right next to me – a redwing. We haven’t seen any of these in the garden for a few years, so I snapped away quickly before he flew off.

And then it got even better! I was keeping an eye out in case the redwing returned and spotted a group of birds in next door’s tree. Unfortunately the tree was at the far side of their garden so I crept as close to our fence as I could get, peered over and discovered it was a small mixed flock of redwings and fieldfares.

They may not have actually been in our garden, but I’m counting them as I’m sure they must have passed through it at some point!

The final star of the show yesterday, although also not technically in the garden, was this magnificent Red Kite, drifting high above. I thought at first it was just the usual buzzard; it was only when I downloaded the photos I could see it was a kite. The perfect finale to my snowy birdwatching day. 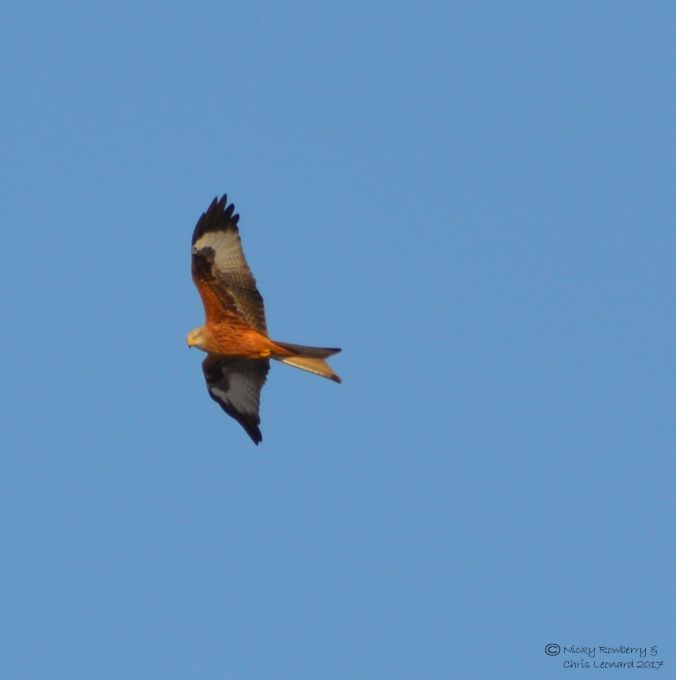 17 thoughts on “From Green to White”