2019 seemed to flash by in the blink of an eye; but then it probably says something about my age that the whole twenty tens decade seems to have whizzed by too. So before my 2020 year’s wildlife adventures kick off, here’s a bit of a review of some highlights of 2019.

As usual the moth trap has been out most weeks for the Garden Moth Scheme and National Moth night and often just for the hell of it. Over 220 moth species graced our Malvern garden with their presence this year. This included over 30 new ones, bringing the total number of moth species recorded in our garden, since we started trapping, up to 368 species! Even better some of the new ones were ones I’ve been wanting to see for a while – Antler Moth, December Moth, The Playboy Bunny Moth (yes really – Ypsolopha sequella) and a Lobster Moth. But best of all, and possibly my best moth find ever – a Bedstraw Hawkmoth. And I was not alone getting excited by this moth – 4 moth watchers came over to the house just to see it. I doubt I’ll ever top this, hence 2019 being the Year of the Moth!

Continuing on the mothy theme, a couple of individuals laid eggs while I was photographing them. An Eyed Hawkmoth laid 2 eggs, one of which I managed to successfully rear to pupation. The chrysalis is now dormant and I’m hopeful that an adult moth will emerge in the spring.

The cameras have of course been out in the garden (and the allotment) throughout the year, recording mammals, birds and amphibians. As always hedgehogs stole the show (and my heart) with plenty of drama. We’ve had the highs of successful releases and hoggy courtship and  the lows of underweight and injured ones needing rescued. We’ve got a new hedgehog house with built in camera, which gave us great views until a hog packed the house so full of nesting material that it blocked the camera! We’ve also got a new illuminated feeder outside the patio doors so we can watch them come to feed from the comfort of the sofa.

A fox has also become a semi-regular visitor to the garden – thankfully there is enough food that it hasn’t bothered the hedgehogs. On the allotment, I was thrilled to get a badger drinking from the pond. The pond was also crammed full of frogspawn in the spring with plenty of newt and frog action throughout the year.

Beyond the garden, we’ve been out and about with the cameras. Back in April we finally managed to get over to the Lugg Meadows near Hereford to see the Snakes Head Fritillaries. Beautifully little flowers bobbing about on a blustery day.

We had a lovely week’s holiday down on Exmoor in the summer and between that and a trip to Wales, we’ve managed to “bag” three more butterfly species – The Marsh (shown below), Heath and High Brown Fritillaries. 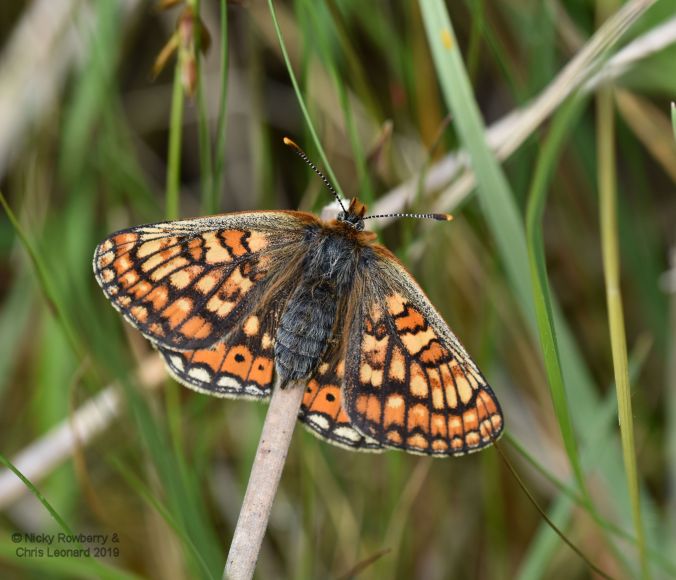 A poignant event for me last year was that we had to sell my Dad’s house in Herefordshire. It was the house my sister and I grew up in and it was a sad day to see it go, but needs must. It had a large garden full of wildlife – not because Dad was a wildlife enthusiast, more because it was pretty much untouched (this is may be where the Too Lazy to Weed mentality came from). The remains of an old orchard, a stream running by and swathes of unmown grass. We left the new owners with a hedgehog house as a welcome gift and instructions to “be careful” when mowing. I shall miss this garden very much.

So every year I make some wildlife oriented New Year’s Resolutions and every year I manage to fail on most of them. 2019 was no exception. So here were last year’s targets: