Day 9 of 30 Days Wild and I managed to finish work early enough to get out and about. I decided to stop at a little nature reserve on the way home, but first I went strawberry picking. The season is just starting and the local fruit farm hadn’t even got their sign out advertising the strawberries. This meant the strawberry field (well poly-tunnel actually) was deserted apart from me.  It was lovely and peaceful and the lack of people meant there were lots of bird and bees about instead.

I took my punnet of strawberries with me to Boynes Coppice and Meadows Nature Reserve which was just round the corner. (No I didn’t scoff all of them, but those I did were very nice eaten in the fresh air!) The reserve consists of a series of meadows managed by Worcester Wildlife Trust. They have a wide variety of flowers and grasses and consequently attract plenty of insect life. 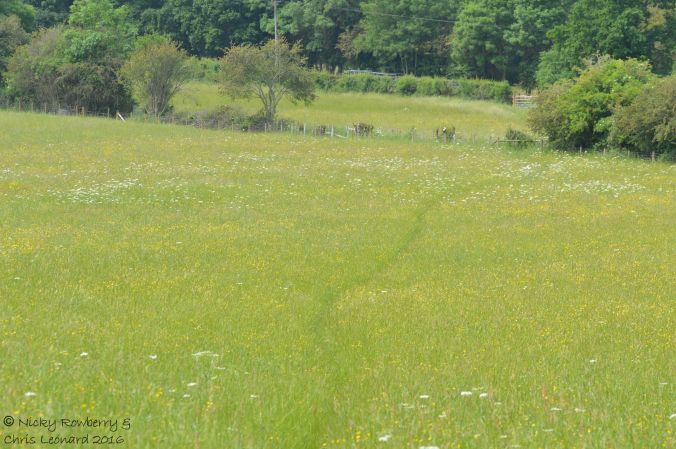 There were lots of hoverflies about – a group of insects I know nothing about, but once again the Facebook community identified a couple for me. The Common and the Large Tiger Hoverfly.

Having chased Common Blue Butterflies round the last couple of sites I’ve been to, I was amazed to find a mating pair of them today. They even stayed put to let me take photos (I guess they had other things on their tiny minds!)

There were bees everywhere and lots of different species – below (I think) are Honey Bee, Buffish Mining Bee, Hawthorn Mining Bee and Ashy Mining Bee. The whole meadow was humming with the sound of bees, although they were drowned out sometimes by the hoverflies! 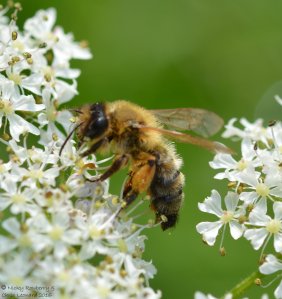 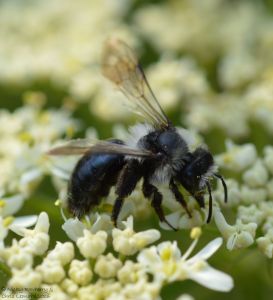 There were a few small moths about, a Burnet Companion which I’ve seen before and a Common Yellow Conch which I hadn’t.

The final two additions to today’s insect selection were a grasshopper (possibly a Meadow one) and some kind of huge sawfly. The sawfly really was a whopper, sitting on the gate, guarding the meadow! 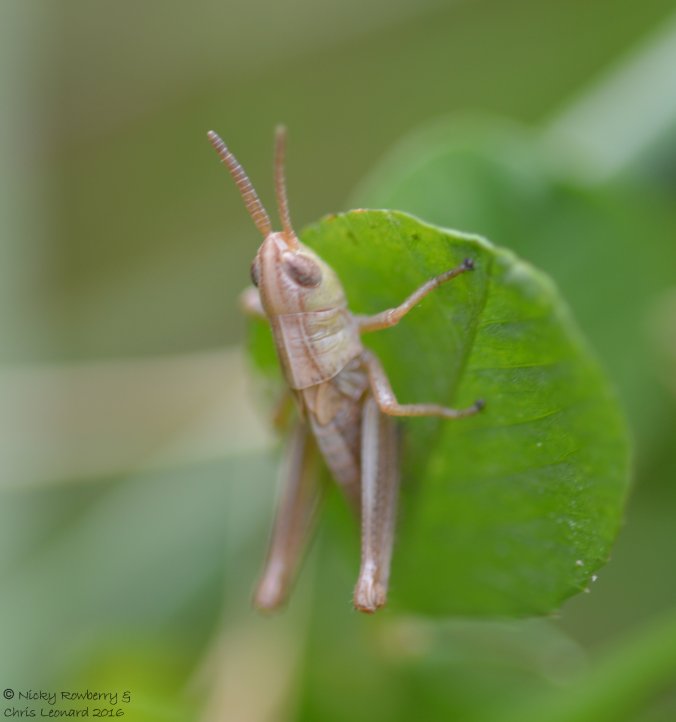 I find Boynes Coppice an incredibly relaxing place to visit. It’s off the beaten track, away from traffic noise and quite often I’m the only one there (as I was today). You can sit on the path and watch the insects buzzing all around or just watch the clouds drifting by. I love these little nature reserves that feel like your own little secret retreat!

Latest weed for 30 Lazy Garden Weeds is the Columbine or Aquilegia. I love the fact that Columbine comes from the Latin for dove as the flower is supposed to look like 5 doves with their heads together. We have a huge variety of these in the garden – everything from pretty much white, to deep purple. Some are two toned, some all the same colour. Some have additional layers or ruffles, others like this one are slightly more restrained. All of them though have got here under their own steam and generally seeded themselves around the place. They are great for bees, some of whom go in the conventional way, but others cheat and drill a hole in the top to access the nectar directly. Lots of the flowers in our garden have tiny holes where the bees have cheated!