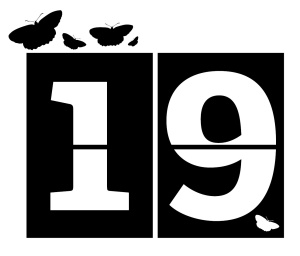 It’s very appropriate that the Day 19 graphic on the left here has butterflies, as that is exactly what we went looking for this afternoon – the Silver Studded Blue to be precise.  This is a butterfly neither of us had ever seen before and there is only one place in the West Midlands where you can still find them – Prees Heath in Shropshire.  At first sight it’s not the most promising site, being sandwiched between two A roads, but looks can be deceiving. Butterfly Conservation have been working on it to improve the heathland and grassland for the benefit of the wildlife and it has obviously paid off.

The Silver Studded Blue caterpillars feed mainly on heather and Bird’s Foot Trefoil, both of which we saw in abundance today. 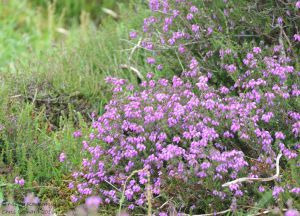 It was a dull and cloudy day, so we were a bit sceptical that we’d see any – so were thrilled when we saw first one and eventually probably a dozen or more of these little beauties. The “silver studs” are actually more of a shiny blue, but they are still absolutely gorgeous little butterflies. Whether it was the dull weather, or just their nature, but the ones we saw were surprisingly docile and let us get really close up for photos. 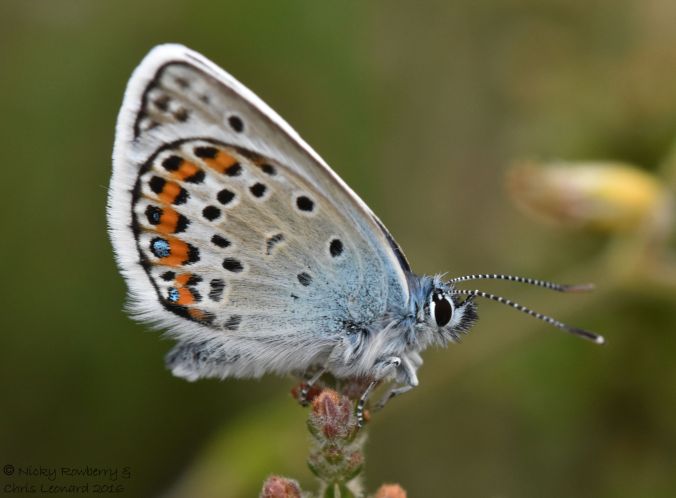 It was a bit of a windy day and the butterflies were blowing about a bit on their heather stems for photography. I did try to video one – here is a very short clip below.

It took a bit longer to get a photo of one with its wings open, but eventually one obliged.

The Silver Studded Blues have an interesting life cycle that involves their caterpillars being taken into ants nests by the ants and tended to by their hosts, who in turn get a sugary solution from the caterpillars. The female butterflies deliberately choose sites near the ants to lay their eggs. Not sure if the photo below is the right kind of ant nest, but there were certainly plenty of them about.

We only saw two non-blue butterflies the whole time we were there. We got a few non-brilliant photos of them and I’d assumed at the time that they were Meadow Browns. But when we got home and looked at the photos properly, I started to get excited that they might be Small Heaths, a butterfly we’d never knowingly seen before. Thanks once more to the good people of the Facebook butterfly group, this has now been confirmed. This means we ticked off two brand new species for our butterfly checklist today – fantastic!

Once we’d had our fill of taking photos of the blue butterflies (several hundred photos later!) we could take in some of the other wildlife around us. Prees Heath is known to have Skylarks and we could hear lots of what we think were these increasingly rare birds all around us. We saw them a few times high in the sky above the heather, singing their hearts out. Mostly they were way too high to get a photo of, but I did manage this poor shot of one hovering – at least I think it’s a skylark! 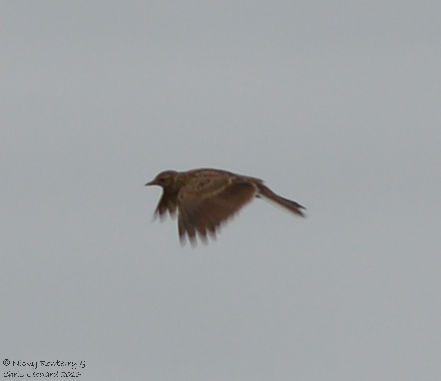 There were lots of thrushes also singing away beautifully. Again we’re not sure, but we think this is a Song Thrush.

The area was full of large black birds – I think Crows. They let me get quite close, probably because they were big enough and tough enough not to be bothered by a little woman like me!

The whole heath is riddled with rabbit burrows – you have to be quite careful where you walk not to twist an ankle. The rabbits of course were not as bold as the crows, but I did eventually get one bunny to sit still long enough to get his portrait taken. 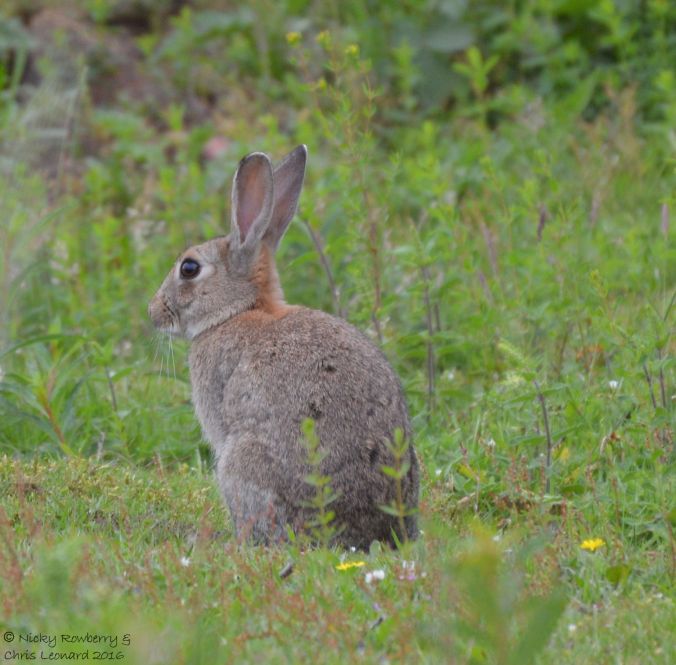 So our trip today was not only a triumph, but double the success we had hoped for – two brand new species for the price of one – Silver Studded Blue and Small Heath! I doubt we’ll have many butterfly expeditions that will be this successful.

And finally today’s weed for 30 Lazy Weeds from our garden – the dandelion look alike. I think it’s either a Catsear or a Hawkweed. Whichever it is, it is clearly very popular with the garden flies. Flies may not be the most charismatic of our garden insects, but they are all food for something, so fine by me. The yellow Catsear or Hawkweed is brightening up the un-mowed areas of our so called lawn and if the flies are happy with it, so are we.