Can’t believe 2016 is all but over. It’s been an awful year in many respects (depressing national and international voting outcomes, various terrorist atrocities, plus the loss of some truly great people), but our garden has provided welcome relief throughout. We may live in the middle of Malvern, but the garden is quiet and peaceful and the wildlife never fails to cheer me up. So here’s a bit of a round up of some of the highlights from 2016.

The year began with one of the many “citizen science” projects we try to participate in – the Big Garden Bird Survey. Throughout the year we also took part in the Big Butterfly Count, the Garden Bioblitz, the Garden Moth Scheme and Moth night as well as submitting assorted records for bees, ladybirds, dragonflies and even a glow worm.

The biggest project was taking part in the Wildlife Trusts 30 Days Wild Challenge. This ran throughout June and I managed to blog about something “wild” we’d done each of the 30 days. I was really chuffed when the blog made it to the final short list for the 30 Days Wild Blogger Awards. We didn’t win, but that didn’t matter as I had such fun doing it.

Moths were, as always, a big part of my year. The trap was out once a week throughout the summer for the Garden Moth Scheme. In the end we recorded 211 species in the garden – a new record total, which included many firsts for our garden. All beautiful, but none more so than this Tiger.

One of my resolutions from last year was to see more butterfly species. We may not be able to attract any more species to our garden, but when we were Out & About we managed to bag 10 more species – way more than I’d hoped for. This takes our lifetime tally to 38 – only about 20 more UK species to go! Every one was a delight, but ultimately you can’t beat the Purple Emperor!

Last year we recorded 12 species of bee in the garden, which I’d thought was pretty good. This year we made it to 25! There may even have been more, but some require microscopic identification and as I don’t want to kill any, that was out. The final bee of the year was this Ivy Bee – new to Britain this species is gradually spreading north, so we were really excited to find it in our garden. Chris even got one of his Ivy Bee photos published in the Worcestershire Wildlife Trust magazine!

One major innovation for the garden was our Trail Camera. Wish I’d bought one of these years ago as they are brilliant! We’ve been able to watch blue tits using the nest box, catch the squirrel stealing the bird food outside and mice stealing it in the garage, as well as watching the birds themselves feeding up close. We discovered we’d got Siskins and a Woodpecker that we’d never seen and followed Stumpy the magpie.

One particular joy from the trail camera has been being able to watch our hedgehogs. We rescued 2 baby hedgehogs one boiling hot day in July, who were then cared for by our local hedgehog rescue lady. One of them (Fred) was returned to us and we watched him trundle around our garden with another older hog. We’ve now got 2 hedgehog houses and have learnt a lot about their behaviour from watching the video footage. Fingers crossed Fred and his friend survive the winter.

As well as watching the wildlife in our garden, we were out and about quite a bit in the summer. We are lucky here to have so many wonderful nature reserves within easy distance. As well as the various new butterflies, we’ve seen slow worms and glow worms (the latter only as a larva unfortunately), kestrels, deer, puffins (admittedly we did have to go a bit further for these) and of course some beautiful countryside. 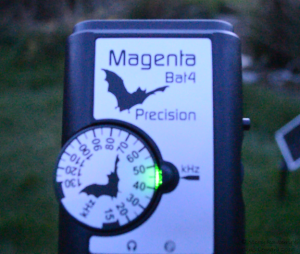 Last year I set out some wildlife resolutions and surprisingly we’ve actually managed to achieve some of them (wildlife resolutions are clearly much easier to follow than the ones about losing weight or cutting back on the Prosecco!) We did see more butterfly species, I did have a go at beetle trapping (not a huge success, but at least I tried), we did replace some of the naturally thriving weeds with specific butterfly/bee loving wildflowers. I even managed to identify the bats that come to the garden in the summer (Pipistrelles) thanks to another new toy, my bat detector.

We didn’t however manage to dig a new pond and the old one is getting increasingly silted up. I also haven’t got round to the new moth tattoo, although I have made some enquiries with various tattooed lorry drivers who come to my work as to where they got theirs done. (much to their bemusement I expect!)

Thank you to all the people we met while out and about this year. We met some lovely people who helped us identify birds and butterflies and pointed us in the right direction when we were wandering aimlessly in search of this species or that. Thanks also to our local hedgehog lady Viv who does such an amazing job and let us have Fred back all fattened up and healthy. And thanks to everyone who’s been following the blog and to all the other bloggers that I follow and who are so inspiring. Wishing you all a happy, healthy and wildlife-filled 2017!