This last week the insects seem to have been coming out in force in the garden. After the relative quiet of the winter, it’s great to hear the buzz of insects in the air again. Moths may not buzz, but it’s still really nice to have them appearing again too. March brought the start of the Garden Moth Scheme for the summer. After a few weeks of fairly plain looking moths (sorry Common Quakers, but you aren’t the most showy of moths), it was nice last weekend to get a few of the more beautiful ones – in fact the Pine Beauty and Oak Beauty.

Hopefully it won’t be too long before the really spectacular hawk-moths start turning up in the trap too.  Butterflies have been proving a bit more elusive than the moths; so far I’ve just seen a few Small Tortoiseshells in the garden, but not managed to nab any photos.

Wasps may not be popular with everyone, but when you study them close up, they really are stunning insects and they are already making themselves known around the garden this year. 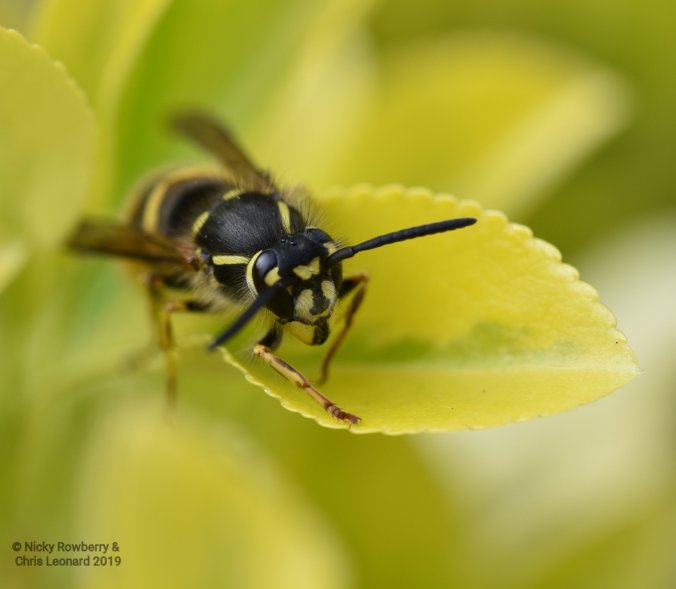 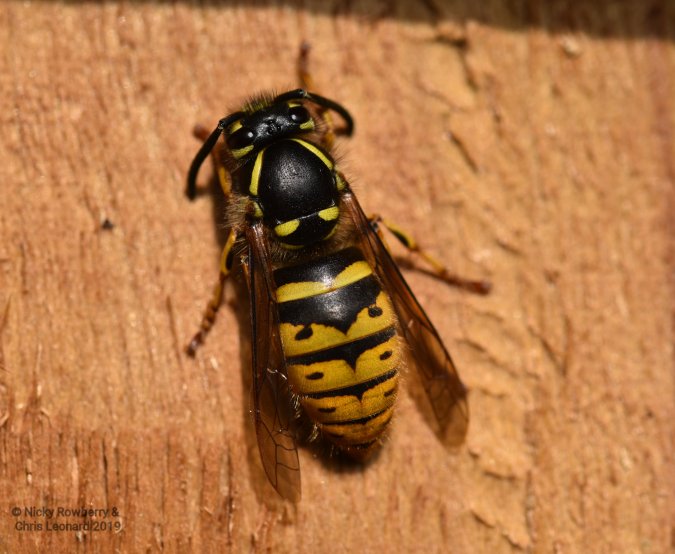 In the last 2 weeks, we’ve already recorded 12 species of bee in the garden – a promising start to the bee season. First up was my perennial favourite – the Hairy Footed Flower Bee. The males appeared first, patrolling frenetically around the garden, seeing off anything remotely bee-shaped that got in their way. 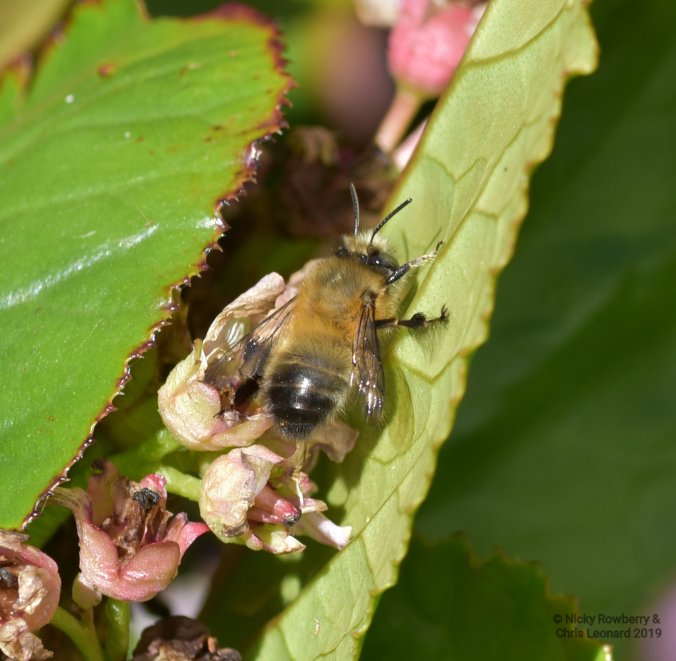 The last few days, I’ve been seeing more of the females – distinguishable by their all black bodies with orangey pollen brushes on the back legs. Our garden has naturalised primroses all over the place and the bees love them. 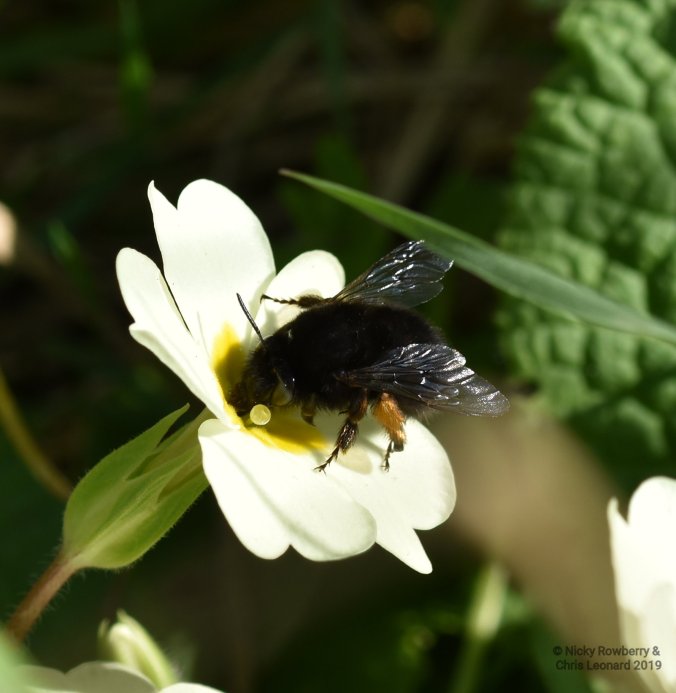 Another favourite is the Tawny Mining Bee, in particular the females who have this bright red foxy looking hair all over them. I spend (some may say waste) an awful lot of time chasing these round the garden, trying to get the perfect photo to do them justice.

Not quite so showy and much smaller is the Red Mason Bee. We get these little bees every year, finding nooks and crannies in the brickwork to nest in. 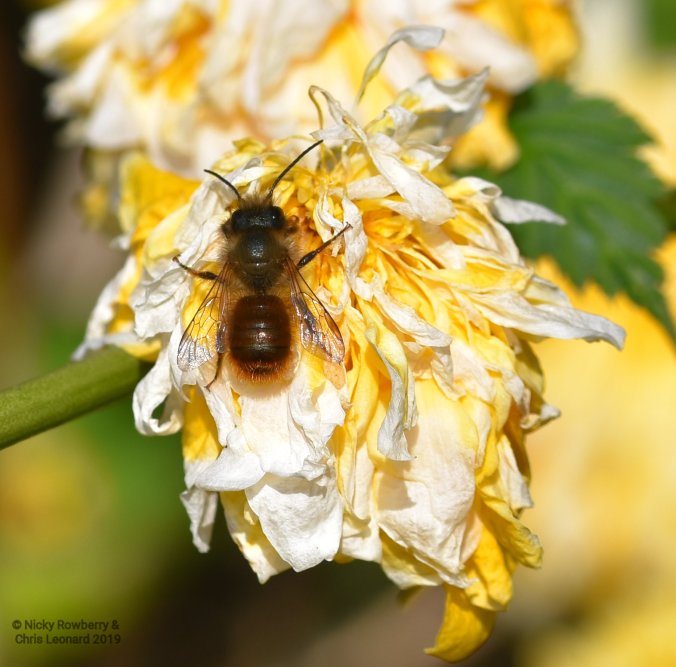 The much larger Red-tailed Bumblebee is also on the wing now, although so far I’ve only seen Queen bees like this one (I think).

The strikingly coloured Mourning Bees have already been busy on the rosemary flowers. These are also a favourite, not least because of the obvious white “kneecaps” which make them a cinch to identify. 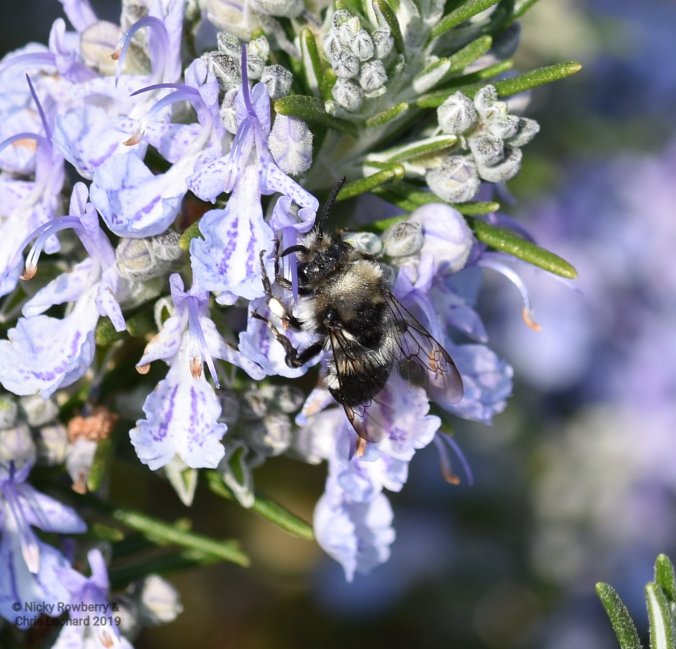 Buzzing like a bee, but actually a fly, Bee-Flies seem particularly abundant this spring. I’ve previously only ever seen the one below – the Dark-edged Bee-Fly. They seem to torment the male Hairy Footed Flower Bees by hovering around “their” primroses. They also seem curious about us and often hover in front of me as if they’re trying to work out what this huge being is? 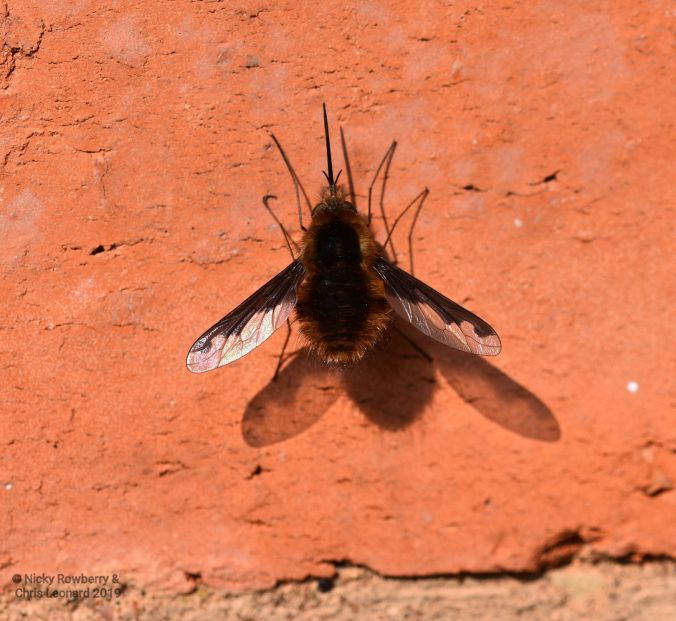 But there is a second species of Bee-Fly – the Dotted Bee-Fly. I’ve been hoping to see one of these for years and have chased a lot of the Dark-bordered ones around fruitlessly trying to find one with dots on. Then I read on Twitter this week to look out for the white stripe on the abdomen – easier to spot when they are flying than the dots on wings whirring like mad. And so I was thrilled when using this marker, I finally spotted one – complete with dotty wings and white striped bum (white stripe is more apparent in the second photo below). 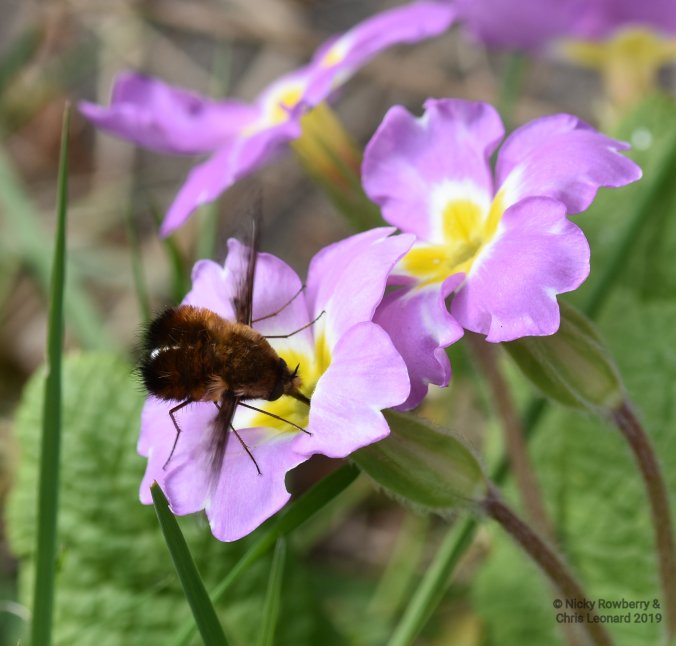 As for other groups of insects, well they’re all starting to appear too. Hoverflies are always fairly abundant, although tricky to get a decent photo of. This male (male because its eyes meet in the middle, so I’m told) Eupeodes was more obliging than most. 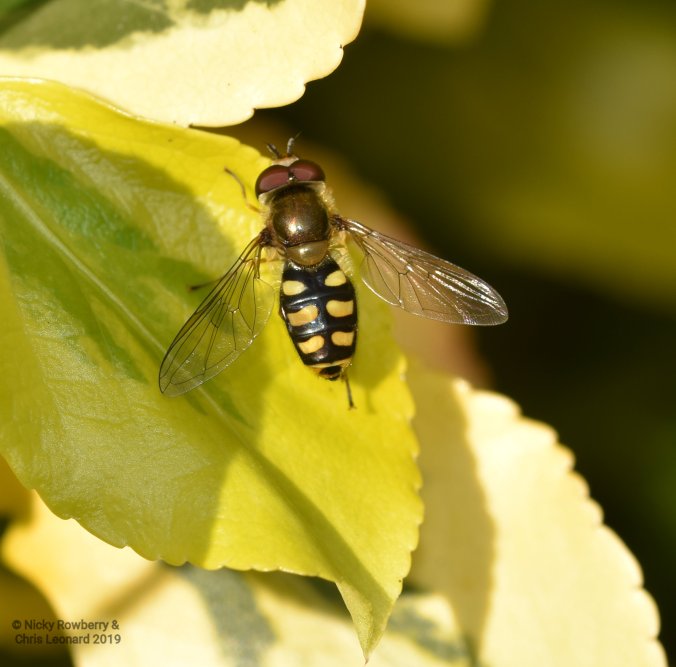 A single Cinnamon Bug so far, but easily visible against the primrose leaves.

I’ve always had a soft spot for the Shield Bug family of insects. We’ve recorded 7 species in the garden in total, although so far this year we’ve only seen the green one and this Dock Bug.

Not had the time yet to go rooting about in the undergrowth looking for beetles, but did at least spot the first ladybird of the year. Slightly disappointingly I think it is a Harlequin, so not an ideal spot, but hopefully some of the native species will appear soon too. 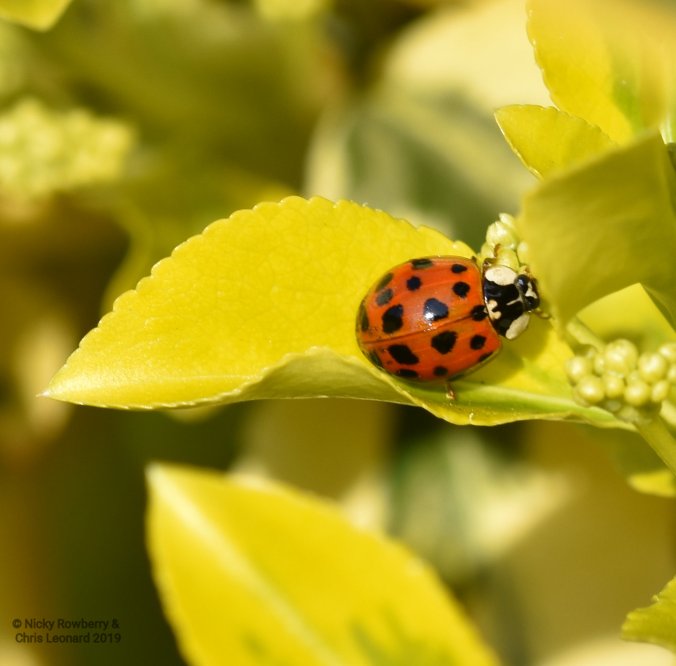 Final photo for the blog, this crab spider lying in wait for a bee. I know they’re not actually insects, but having spotted him today posing so nicely on the red valerian, it seemed rude not to include him. I thought these spiders were supposed to be able to camouflage themselves, but this one doesn’t seem to be doing a very good job. 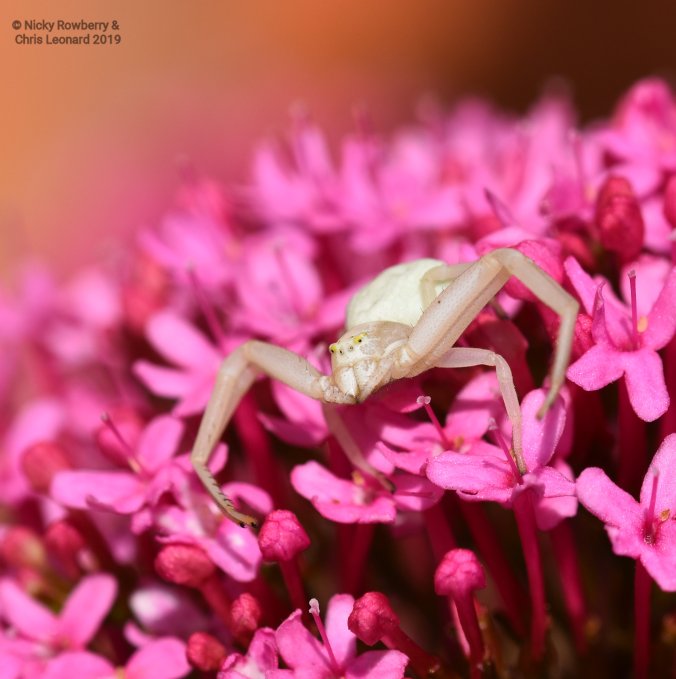 So that’s a round up of the spring invertebrates currently buzzing/flying/crawling around the garden. It feels like everything is springing into life at last and we can look forward to an insect (and arachnid) filled summer.