As 30 Days Wild draws to a close for another year, we are managing to go out with a bit of a bang.  Having already had a very successful June, seeing our first ever Marsh & Heath Fritillaries, we set off to Wales in search of our final fritillary and 50th butterfly species – the High Brown Fritillary. Some of the land we went on was private, so I can’t disclose the exact location but we were in the Alun Valley area, courtesy of an organised and escorted trip by Butterfly Conservation.

The High Brown Fritillary is apparently the UK’s most threatened butterfly species, remaining in only a few sites in England and only one in Wales. It happened to be the hottest day of the year so far for our walk – challenging conditions for an unfit middle-aged couple!

For the first site we visited we parked (I say “we parked” but we got a lift there from the very kind Mike) next to a dried up river bed. There were a few pools remaining and it was great to see loads of what we think were toad tadpoles wriggling in the shallows. They’d got their back legs but no front ones yet; fingers crossed they complete their metamorphosis before their pool dries up completely.

We headed up a slope to an open area of bracken that is being managed for fritillaries. Loads of large fritillaries were visible darting about the bracken – a mix of Dark Green and High Brown. The High Browns were a really rich dark orangey brown colour, the Dark Greens being a bit more muted, but at the speed they all flew, it was difficult to tell which was which. It soon became apparent that the fritillaries had little intention of stopping to get their photos taken. A ready rule soon came into practice – if a large fritillary landed it was a Dark Green one; if it flew past you like the clappers, it was probably a High Brown. Despite repeated attempts to chase them down, the High Browns escaped our cameras at this site. Thankfully the Dark Greens were a bit kinder to us. This one posed nicely for Chris on a thistle flower.

Then Mike spotted a pair of mating Dark Greens and we all rushed to get a photo of something!

Having had enough baking in the heat at the first site, we moved onto another site a mile or two away. This also had lots of High Browns with perhaps fewer Dark Greens. Apparently some other lucky butterfly spotters had got plenty of good photos of the High Browns earlier in the day – our timing was not so good.  The cloud cover meant a lot of the fritillaries had gone down into the bracken and weren’t flying, making them virtually impossible to spot.  They do particularly like thistle flowers and a local guide pointed out a thistle that had had High Browns nectaring on it in the morning. It seemed worth a shot, so I staked out this thistle for a few minutes. Having limited patience, I soon got bored of looking at a butterfly-less thistle, so reached into my bag for some water. No sooner had I done so than a High Brown Fritillary landed on the thistle. Water bottle cast aside, I grabbed the camera again and managed a few frantic shots before it flew off. None of my photos would win any awards, but they are at least identifiable as High Brown Fritillaries – on the first photo you can see an extra row of brown spots between the outer edge and the silver spots – the Dark Green Fritillaries don’t have these. 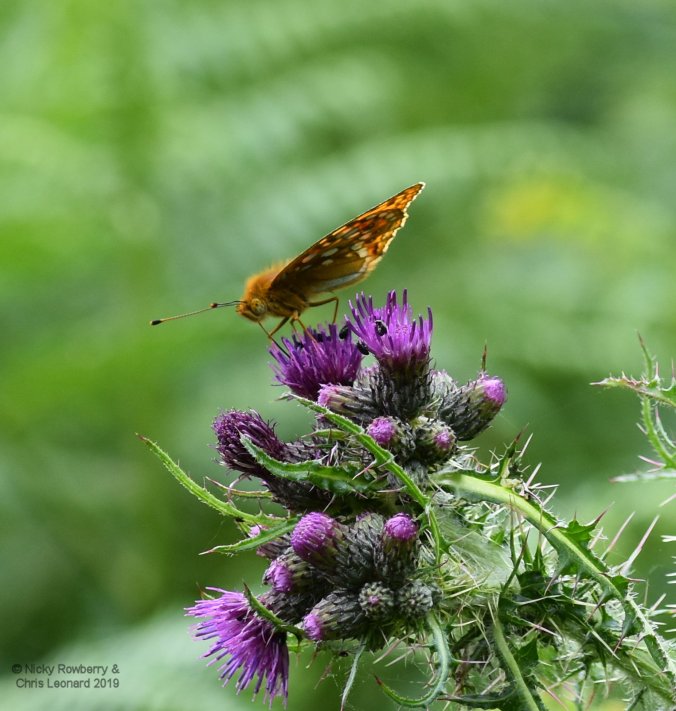 We saw lots of other butterfly species during the day – Small Heath, Comma, Red Admiral, Meadow Brown, and Skippers – most of which were also bombing around in the sunshine too fast to photograph. Heading back to the car we saw a patch of nettles covered in Peacock caterpillars – the next generation in the making and a lot easier to photograph than fast flying butterflies.

So we’ve “bagged” our final fritillary species and our 50th butterfly species in total. Only 8 more species to go (9 if we count the Cryptic Wood White over in Northern Ireland). It was a really great day in Wales, with a lovely bunch of people. 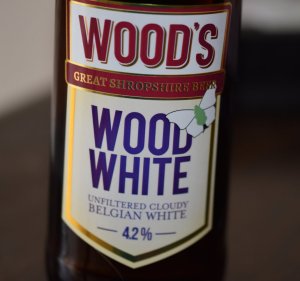 And to finish the day – a bottle of Wood White beer – a new beer produced by Wood’s brewery with part of the sales going to Butterfly Conservation. Always happy to do our bit for conservation!