It seems a bit like a lifetime ago already, but in June we had a fantastic holiday in Norfolk. Although the species we were most keen to see was the Swallowtail butterfly, we made the most of the opportunity to see as much other wildlife as we could. One of the groups that we saw in abundance was the Odonata – the dragonflies and damselflies. In total we saw 9 species, 6 of which were new to us. I’ve been very lucky to have help identifying them all from a very friendly and helpful group on Facebook called UK Dragonflies & Damselflies.

We lucked out with our holiday let – a lovely house in Wroxham on the banks of the River Bure. Our holiday garden ran right down to the river with its own inlet for mooring boats (with our complete lack of boating skills we weren’t brave enough to have our own boat!). The area was positively alive with dragonflies and damselflies, so we could just sit and enjoy them without having to go anywhere. We saw 5 species in the garden alone.

One we had seen before, but which is still a delight every time we see it, is the Banded Demoiselle. 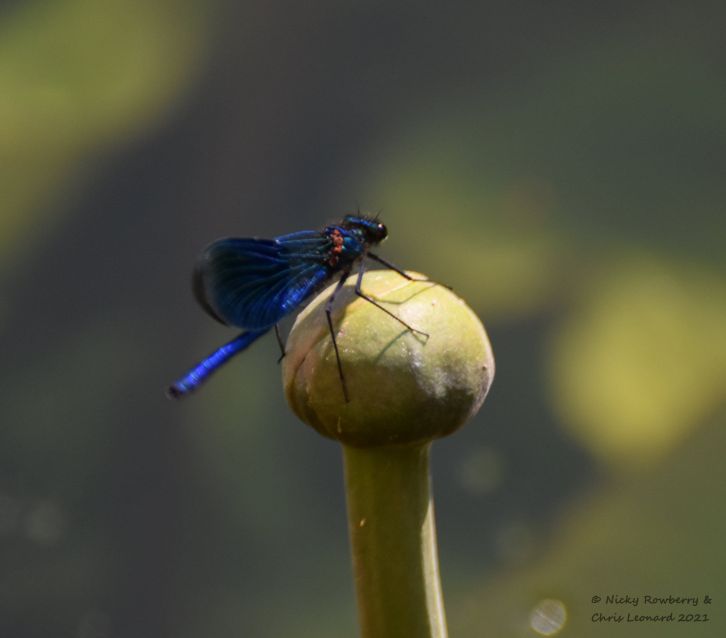 They’ve got a lovely way of flicking their wings open and shut when they are resting.

We’d also seen Common Blue Damselflies before, although they’re not a species we get in the garden at home, so it was nice to just chill and watch them.

Red-eyed Damselflies were new for us and were probably the most abundant species at our holiday let. The males, as the name suggests, have vivid red eyes, with a blue body and blue tip to the tail.

The red-eyed damselflies were mating all over the place, but their favourite romantic rendezvous were the water lilies. They were literally queuing up for a turn on the lily flowers. If you look closely you can see that some pairs are actually submerged, seemingly undeterred in their eagerness!

There was also a 3rd species of damselfly in the garden – the Blue-tailed Damselfly. The males have a light blue spot near the end of the abdomen, but somehow I didn’t manage to get a photo of a male. The females are more interesting though in that they have at least 5 different colour forms. There seemed to be at least 2 of these forms flitting around the garden – the top one below is the more typical colour and below that is the rather grandly named “rufescens obsoleta” form. 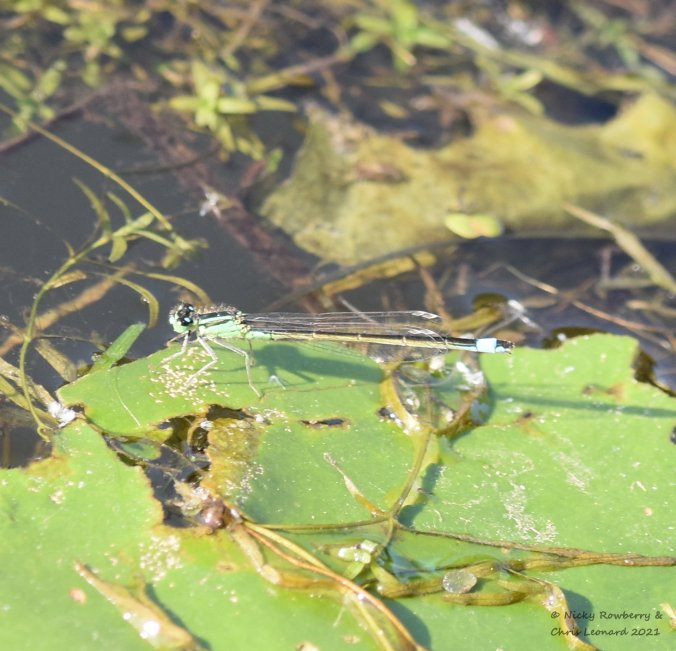 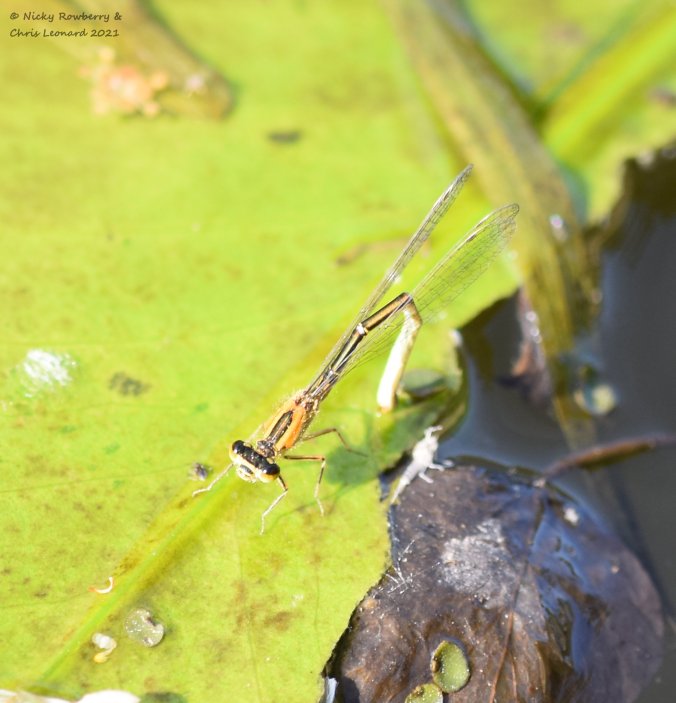 There were quite a few of the larger dragonflies about the garden, but the only one we managed to photograph was the Black-tailed Skimmer. This immature male rested nicely on the bushes to get his photo taken.

The males start of the golden colour as above, but when mature they turn blue, with a blackened tip to the abdomen – like this one we saw at Hickling Broad. 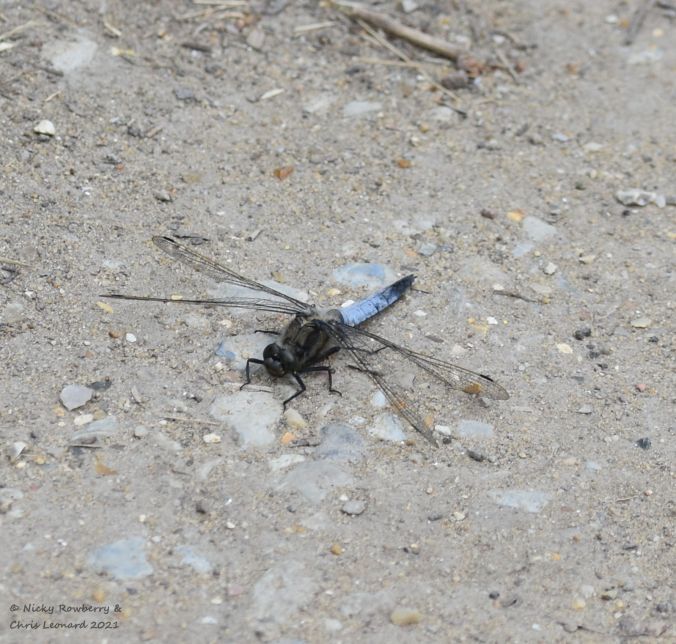 Having the river on our doorstep meant that when we got up in the mornings, we were lucky enough on a couple of occasions to spot dragonflies emerging from their larval stage. This first one is another Black-tailed Skimmer – a male (thanks again to the FB dragonfly people for identifying this). We missed the initial breaking out of the exuvia, but got this sequence of photos.

We also managed to catch on video the moment he opened his wings for the very first time – quite a privilege to see!

We did catch another dragonfly actually bursting free. It never ceases to amaze me how they expand into such huge insects out of such relatively small larvae. 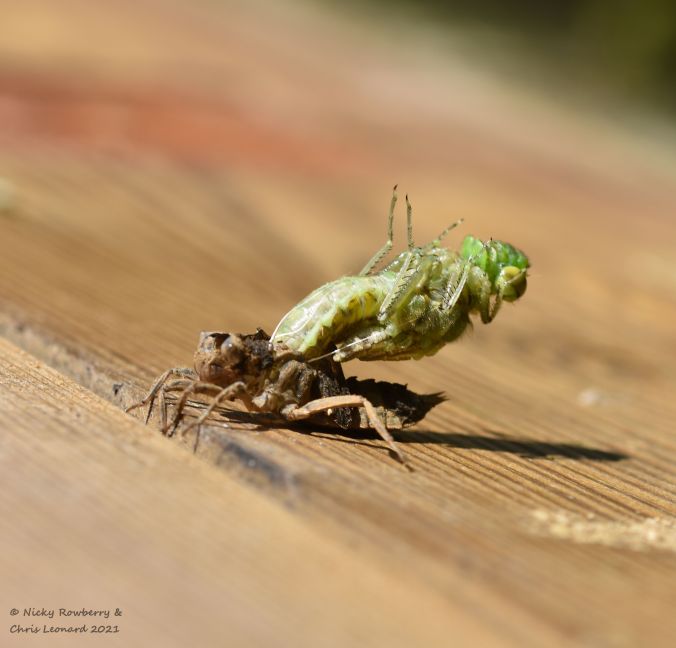 Our adventures out and about in Norfolk took us to various nature reserves with more dragonfly delights. At Hickling Broad we glimpsed this Hairy Dragonfly. Not a great photo but another new one for us. 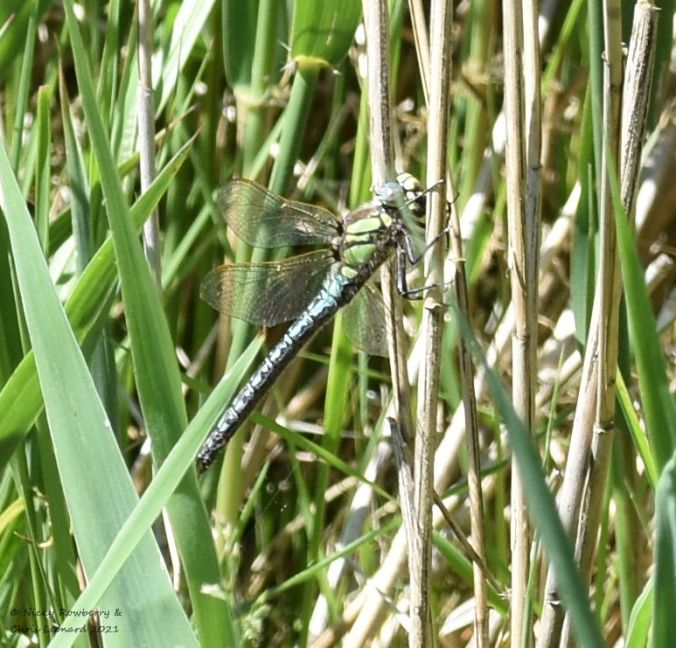 Also at Hickling Broad we saw this gorgeous Four-spotted Chaser – so named for the spots on his wings.

At Strumpshaw Fen we were graced by the presence of a Scarce Chaser. They are as the name suggests “scarce” and in fact are classified as “near threatened”, so it was a lucky spot.

Star of the show though was the Norfolk Hawker. We saw them at Hickling Broad, Horsey Mere and Strumpshaw Fen. The Scarce Chaser may have been scarce, but the Norfolk Hawker is actually considered to be endangered and one of the rarest dragonflies in the UK. They are stunning dragonflies with green eyes, brown bodies and a yellow triangular mark at the top of the abdomen.

We even caught this pair of Norfolks doing the best to ensure that they became just that little bit less rare! 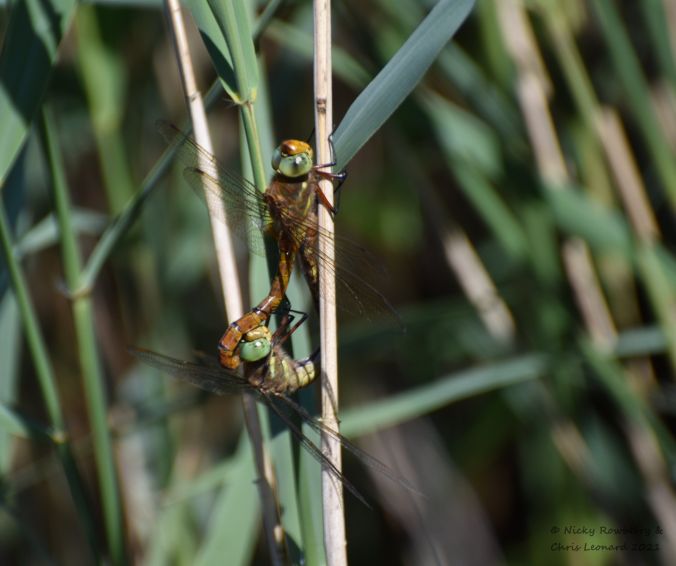 So that’s 9 species of dragon/damselfly seen in a week without really even trying! A few years ago we started on a quest to see all the British species of butterfly and only have 5 to go on those. I think we may just have found the next group to focus on – and Norfolk has given us a great start already.