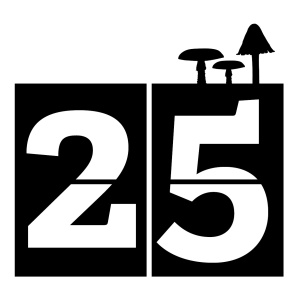 It’s Day 25 of 30 Days Wild and after recent visits to canals, wetlands and woodland, I thought a walk through a meadow might be nice. They’re usually good places for butterfly spotting, although it was a bit windy so getting good shots was going to be tricky wherever I went. Being a bit short of time today, I headed to one of our local ones and a particular favourite – Boynes Coppice just outside Malvern.

Boynes Coppice and Meadows reserve is made up of 4 fields, plus a wooded area and is rich in plant and insect life. It was nice and sunny as I arrived and the butterflies were bobbing about over the fields in great numbers. Initial thoughts were that it was going to be easy to get some good shots; that was before I realised the butterflies were in frisky mood and just wouldn’t stop moving!

The fields have a diverse flora and looked lovely today. They are deliberately managed to maintain this, being cut for hay only after the seeds have set. 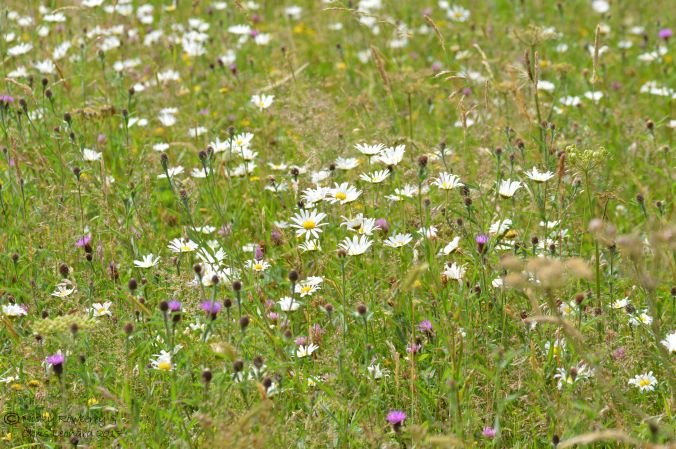 The two most abundant butterfly species I saw today were the Meadow Brown and Marbled Whites, both of which were present in large numbers and neither of which stopped flying to start with. Occasionally I’d see one land, but always too far away for a photo (you have to stick to the path to avoid trampling the plants, so can’t go chasing through the grass to get closer to a butterfly).

Eventually though a couple of Meadow Browns deigned to land close enough for me to get some photos of both wings up and wings down. 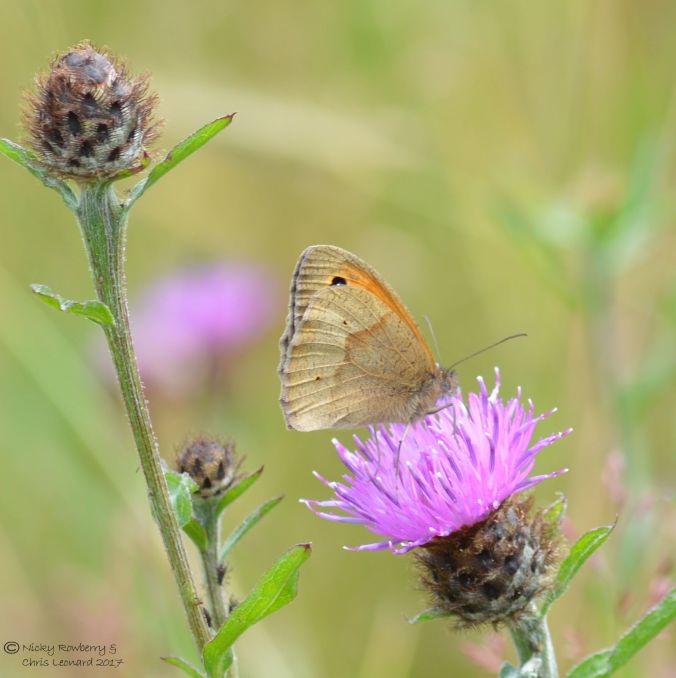 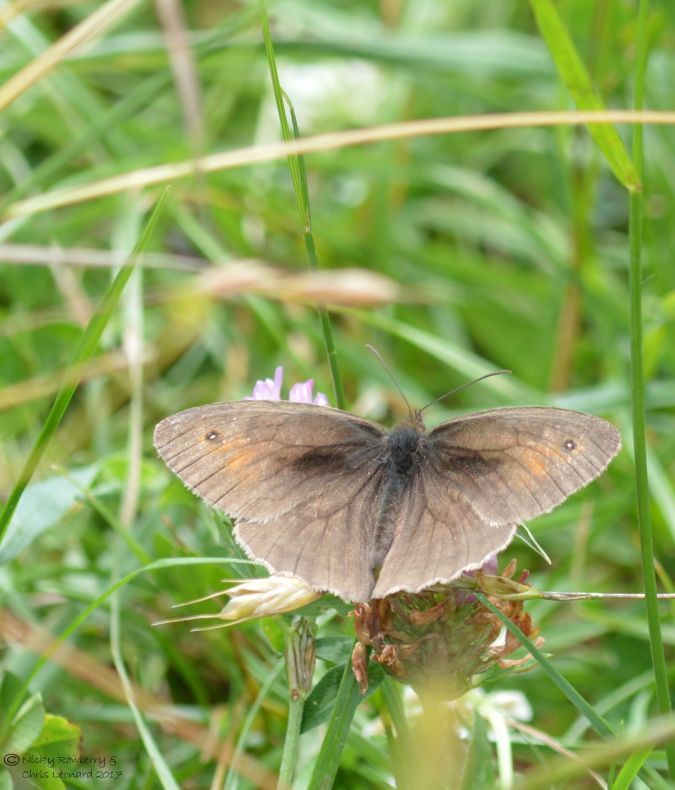 The marbled whites proved trickier at first – there were plenty of them, but I couldn’t get close. As I walked along the path, I occasionally looked back to see several dancing in my wake; but if I turned back they all flew off again. Eventually though, either I got my eye in, or they got slower (probably the latter) and I managed a few photos. The marbled whites look great from any angle, having beautifully patterned wings both from above and below. 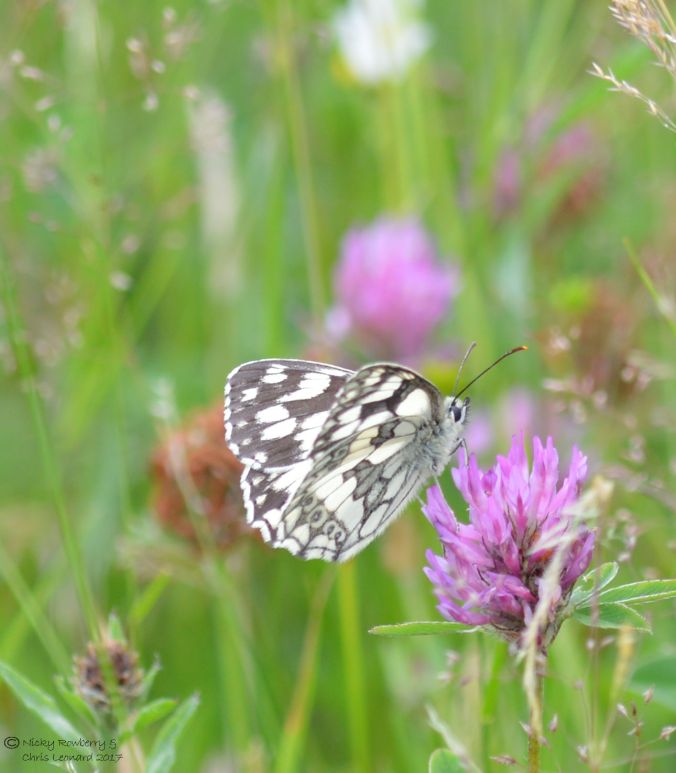 Of course the trouble with taking photos of butterflies on grassland, is the grass! Nearly every time they landed, there was a bit of grass in the way of the perfect shot – like this one below. 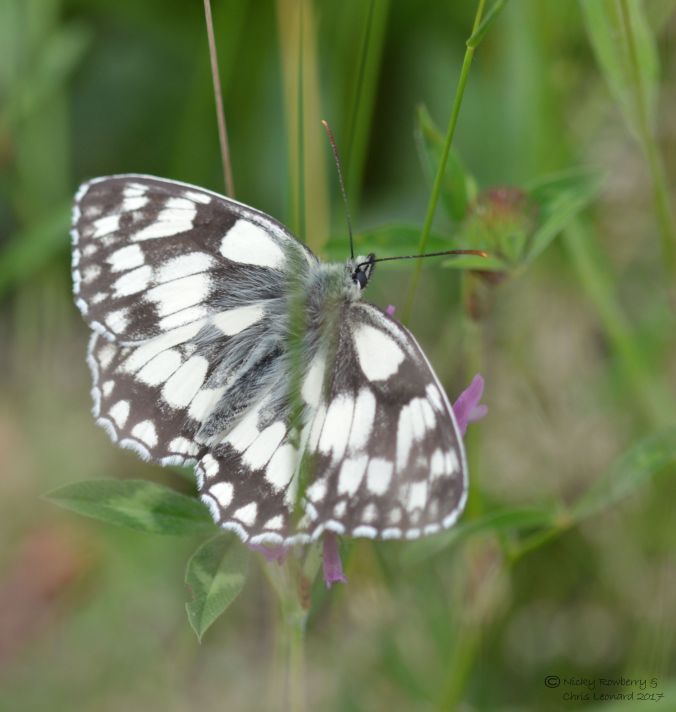 Occasionally though I would get a clear shot. 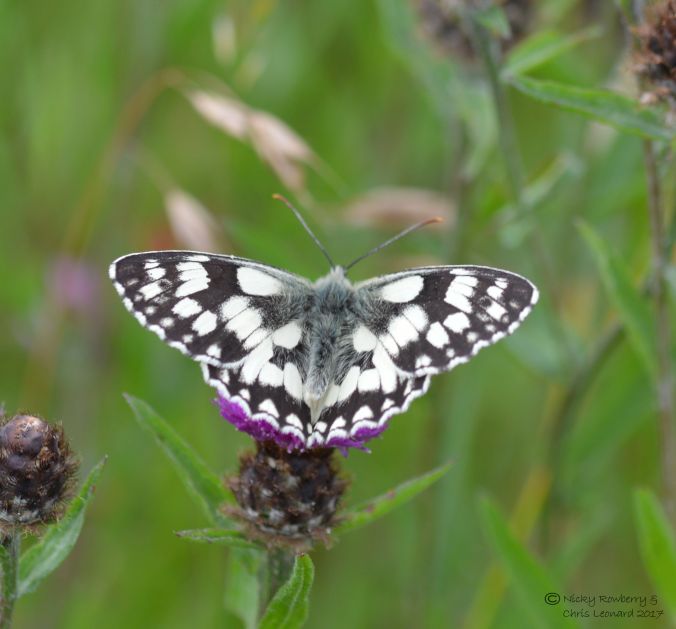 Towards the end of my visit is started to drizzle and that definitely did slow the butterflies down. As I headed back to the car I could see quite a few of them sitting out the rain resting on flowers. I was really pleased when I found two close enough to get in one shot; when I downloaded the photos I then realised there was a third butterfly in the same frame – a meadow brown at the top. 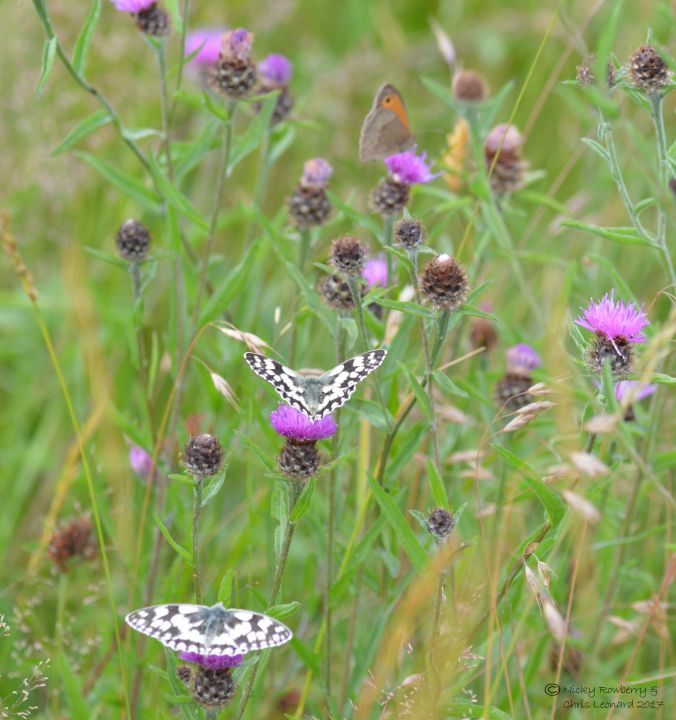 Since the butterflies were a bit less flighty in the drizzle, I tried for a close up shot. Still not easy as I had to hold the camera out as far as my arms could reach, so that I didn’t stray from the path. So by no means a perfect photo, but it does show up just how furry they are, something that is not so obvious when they are flying around. 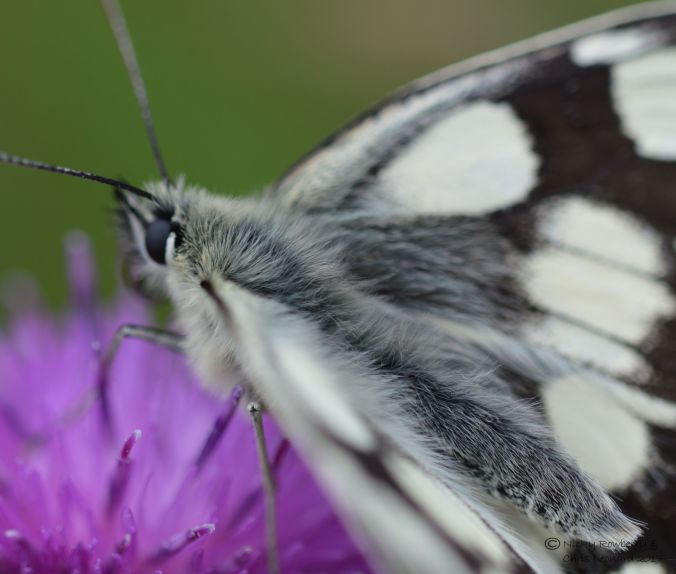 There were of course plenty of other insects around besides the butterflies, like this Red-Tailed Bumblebee and a beautiful hoverfly. 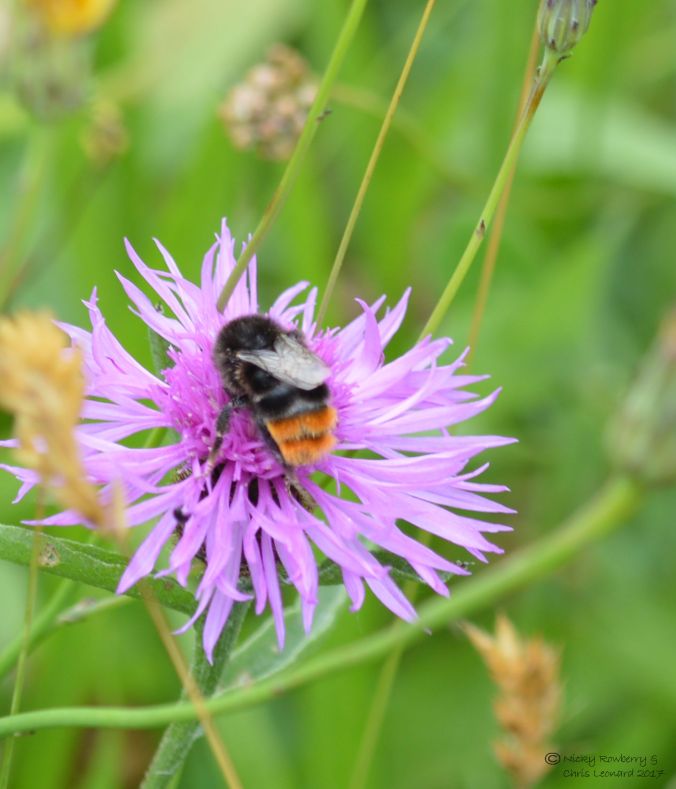 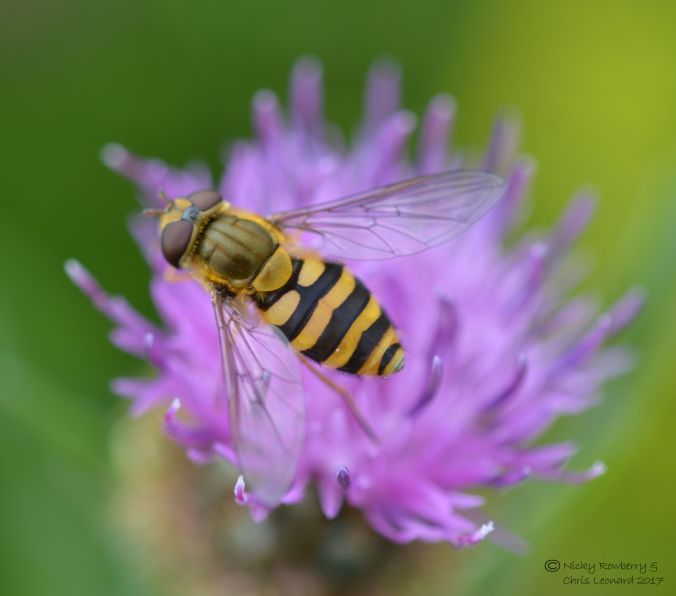 I also spotted (no pun intended) this ladybird on a thistle. The photo is by no means great, but I liked that the ladybird was so shiny that you can see my reflection in his back as I’m hunched over trying to take his photo! 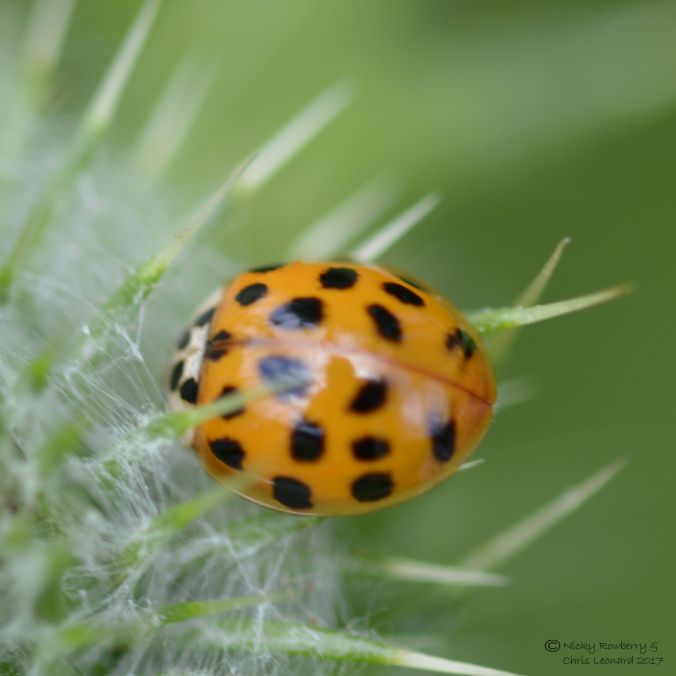 I love going to Boynes meadow, it is one of the most peaceful places I know. It is only a small reserve and most times I go, I’m the only one there – as I was today. It is set back off a road, that is itself set back off any busy roads, so you can forget about the rest of the world. The perfect place to unwind and enjoy those marbled marvels dancing above the grasses.

It’s taken me over a week to write this latest post, partly because I’ve kept getting side-tracked by things in the garden and partly because we’ve had friends staying – so I had to spend time tidying the house (although I doubt they could tell that) and drinking Prosecco! But over a week ago now, Chris and I headed down to Prestbury Hill, near Cheltenham in search of the Chalkhill Blue and Dark Green Fritillary butterflies. Prestbury Hill is, as its name suggests, high up, with stunning views over Cheltenham racecourse. 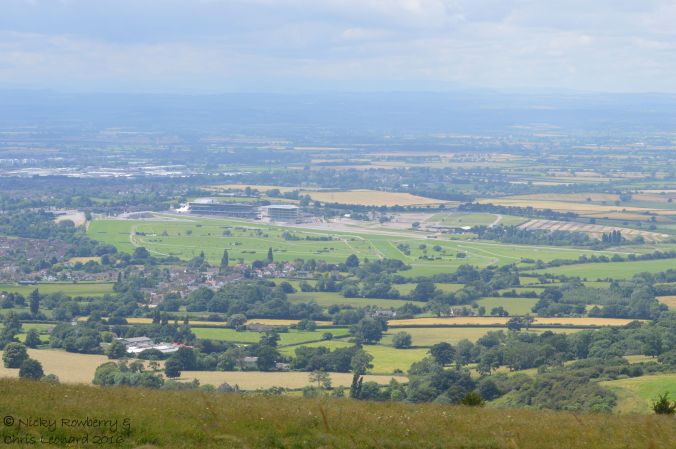 The reserve is run by Butterfly Conservation and consists of 2 areas of limestone grassland. The sloping grasslands are full of wildflowers and insects and would be a lovely place to walk even if you weren’t into butterflies. I particularly liked these Cotton Thistles, with their huge spiralling flower heads. 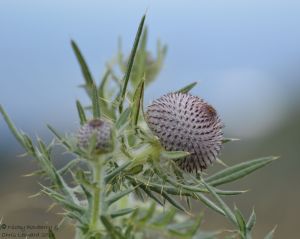 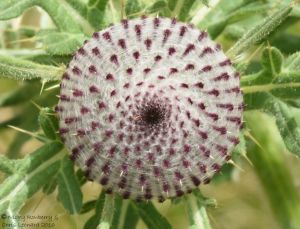 Although we went looking for butterflies, the first insect of interest we spotted was this beautiful Brassy Longhorn moth – I’ve no idea how they manage to fly with such long antennae? 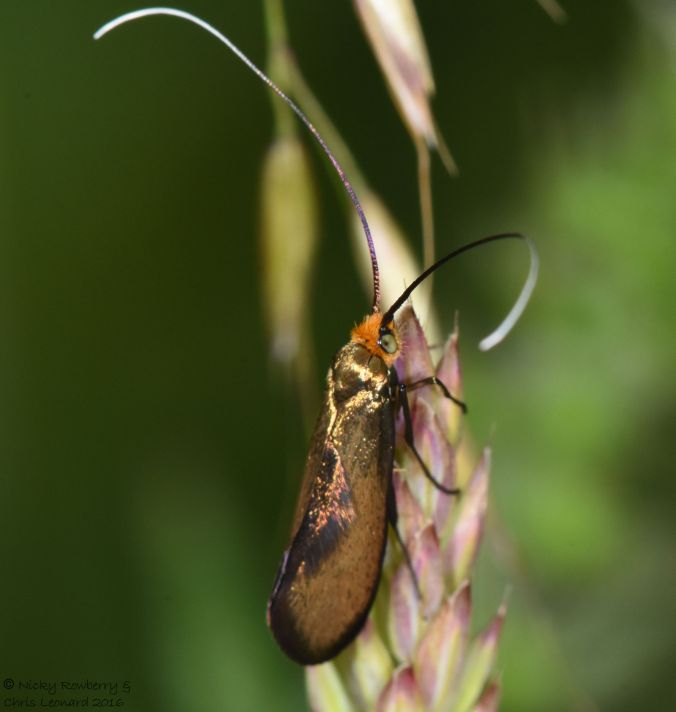 Although on these walks we tend to be looking down, or at least across for butterflies, Chris did look up long enough to spot this Red Kite soaring above us. Not a great photo as it was difficult to do against the bright sky. There were buzzards too, but as we see those fairly regularly at home, the kite got all the attention. 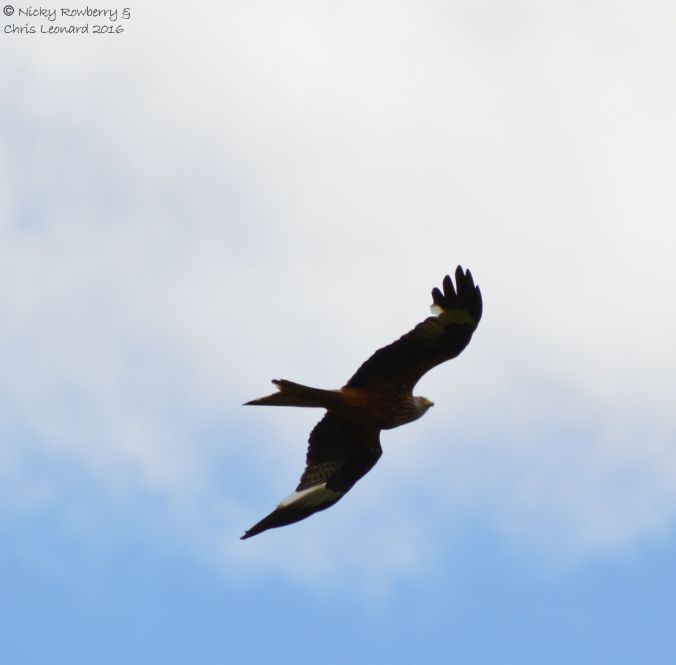 We followed the paths for quite a while, spotting lots of Marbled Whites and Large Skippers, while we searched for the blues and fritillaries. 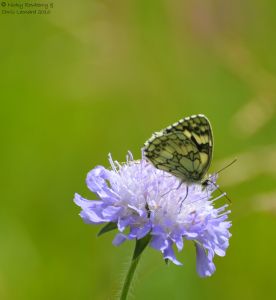 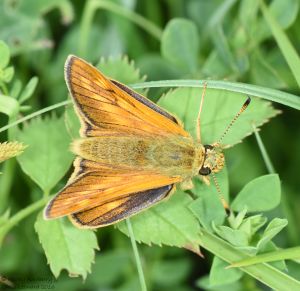 Eventually though we found the first prize of the day – a Dark Green Fritillary. It then took about 20 minutes of chasing about to get a photo to confirm that it was indeed our target photo. And then longer still to get another photo of it with its wings open, but it was well worth the hunt as it is a gorgeous butterfly. 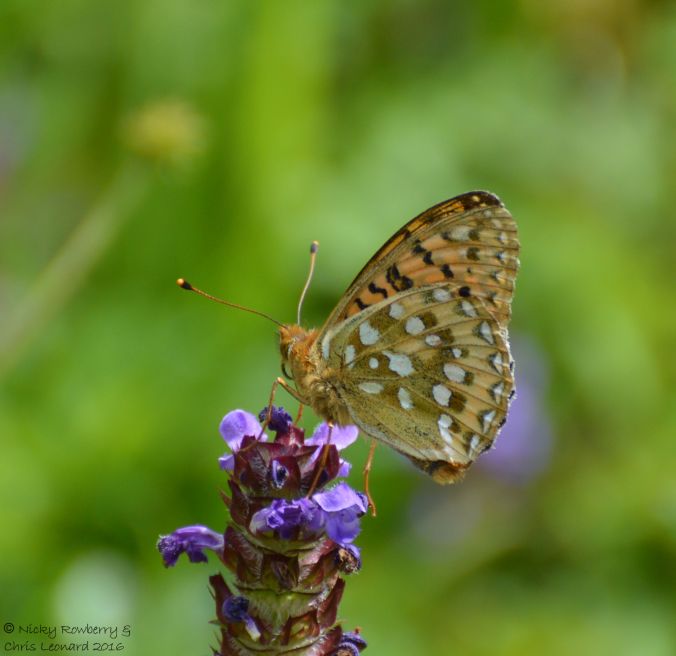 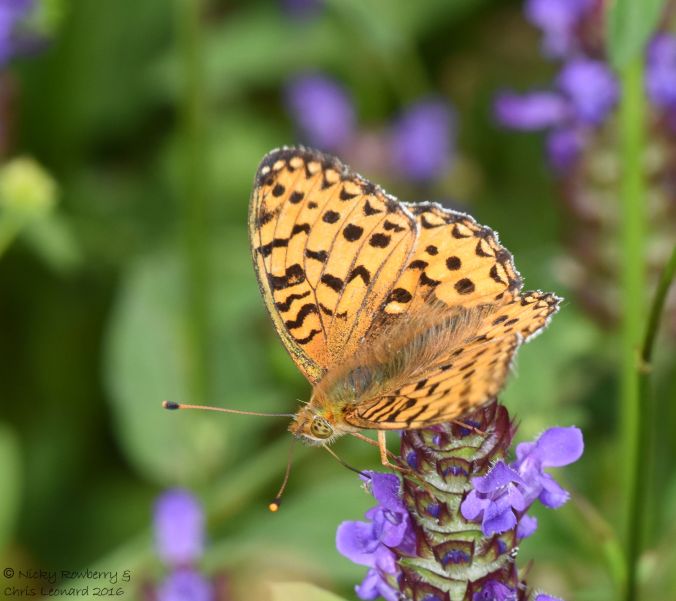 The reserve is divided into 2 sections, so having “bagged” our fritillary we headed over to the other half to look for the Chalkhill Blues. Turns out though our researcher (i.e. me) had got a bit ahead of herself as we were apparently a couple of weeks too early for these. Fortunately we met some butterfly enthusiasts who put us right before we spent hours pointlessly searching for them.

We did see some more fritillaries though, which we initially assumed were more of the Dark Green ones. It was only when we got back and downloaded the photos, that we realised these ones were actually Silver Washed Fritillaries. They look very similar when they’re flying around. 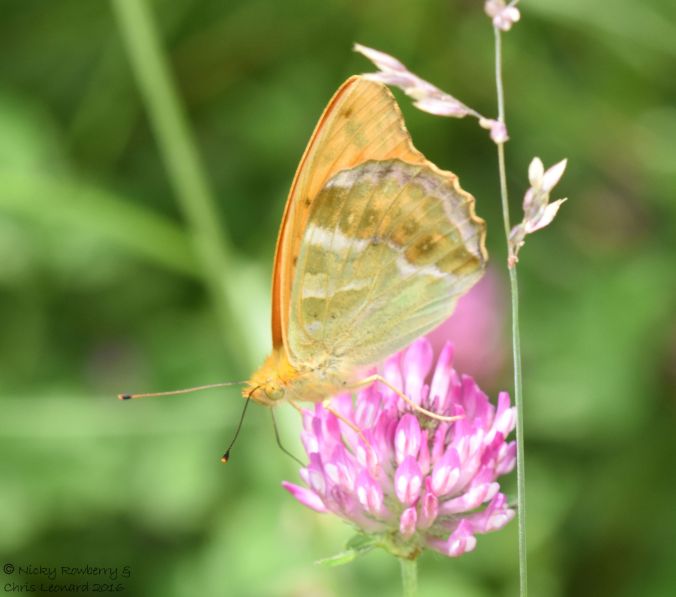 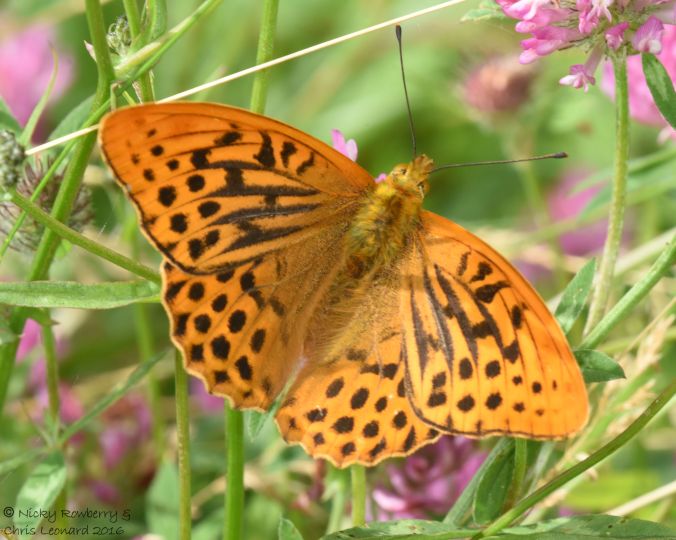 One final treat was finding several Small Heath butterflies. This had been a new species for us a few weeks ago and now they’re popping up everywhere! 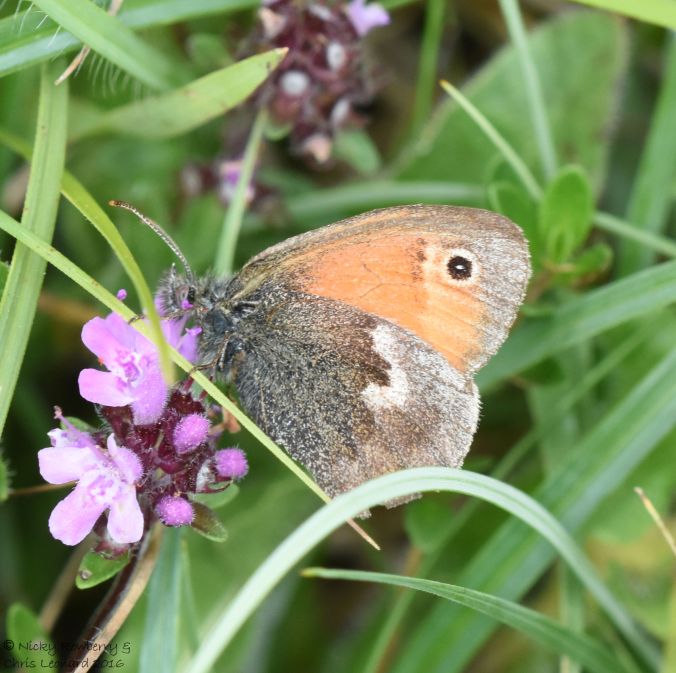 So another great day out and another butterfly species ticked off the list. We will hopefully make it back to Prestbury sometime soon to see the Chalkhill Blues – so watch this space!