I started to feel properly Christmassy this week and that was even before the winter wonderland of snow arrived this morning. Amongst the (many) weeds in our garden we have some lovely evergreen plants, right out of a Christmas carol – holly, ivy and mistletoe too. None have been planted deliberately, they’ve all just arrived. Feed the birds and they deposit berries around the garden, which grow and attract more birds, which deposit more berries – a birdy/evergreen circle.

The ivy must surely be one of the most useful plants in our garden. Not only do the leaves provide cover for a host of insects, the flowers provide a much needed late nectar source (particularly for my favourite Ivy Bees) and the berries provide food in winter for the birds. We are doing our best to encourage the ivy to grow over as much of the fence as possible.

Our holly “tree” is little more than a small bush, but since we didn’t plant it at all, we can’t complain. We first spotted it a few years ago when it was literally a tiny seedling with just 3 leaves on it – presumably a helpful bird had either dropped a berry, or deposited it some other way in the front garden. This was our magnificent tree back in 2013, less than a foot tall. Four years later and it is the same height as me (so approximately 5 times the size). 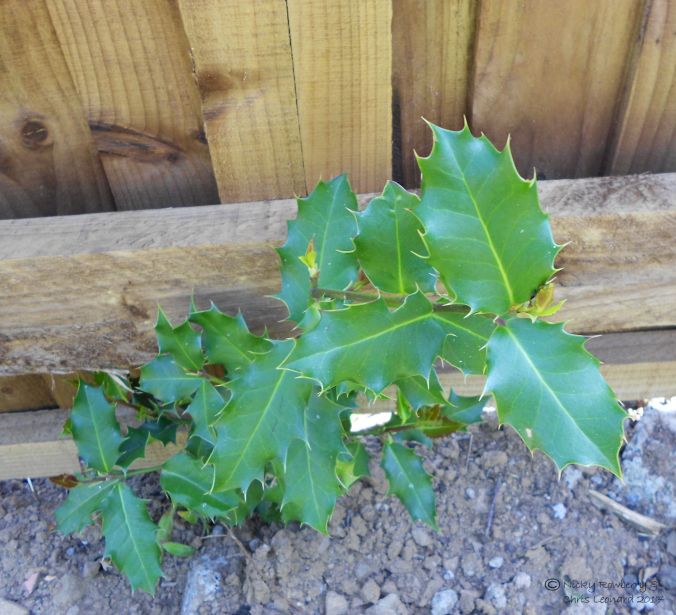 We first noticed mistletoe growing on our apple tree a few years ago. We now have several clumps, although no sign of any berries yet – don’t know if this is because our mistletoe is not mature enough or we’ve just got male specimens?

Mistletoe may have the romantic connotations of kissing traditions at Christmas, but the actual name may have slightly less glamorous origins. Some websites suggest the name derives from two old words – mistle meaning dung (from the way in which birds may deposit it) and ta meaning twig or stick. So it’s really just a dung twig – not so tempting to kiss under it now!

Given the meagre clumps of mistletoe in the garden, we won’t be harvesting any for festive decorations any time soon. Fortunately my Dad has a garden full of the stuff, I just need to clamber up to get a bunch. Dad has always wanted to go the Tenbury Mistletoe Auctions, so last week we finally got around to going. What an amazing thing it was, no wonder people come from all over the country to see and bid on these winter evergreens.

First up was a whole shed filled with holly wreaths – presumably intended for shops rather than individuals as they were in multiple counts per lot. The auctioneer whizzed along the rows of them, with people bidding for dozens at a time.

The main attraction for most though was the mistletoe – row upon row of berry laden bundles. It really was a very impressive sight. 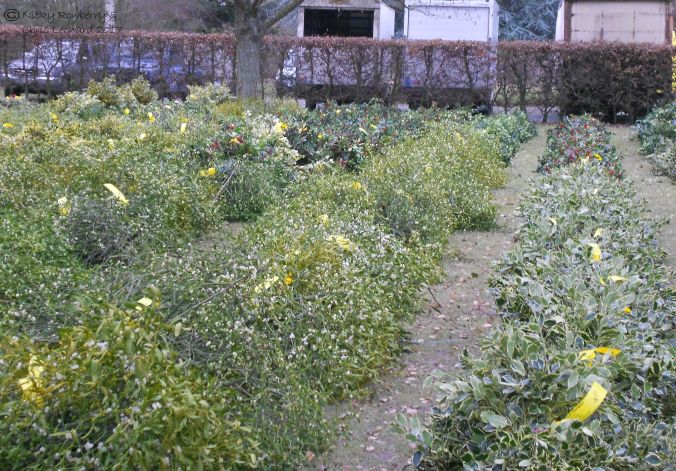 Once again the auctioneer made short work of the lots – each bundle going in a matter of seconds. No sooner had each one been auctioned than it was carted off and the crowd moved on. The Tenbury Mistletoe sales usually make the local news and here is this year’s report – for those with eagle eyes, yours truly appears at about the 5 second mark – dumpy little woman right behind the auctioneer!

We probably won’t put our Christmas tree up for another week, but in the meantime it’s nice to have this midwinter greenery around the garden.