I’ve not managed to blog much lately, but rather than it being for lack of things to blog about, there’s almost been too much. There’s a lot going on in the garden at this time of year and I get distracted far too easily! Bees, moths, dragonflies, tadpoles – I spend so much time watching them all, I don’t quite get round to writing about them. But it’s a nice problem to have and much better than having an empty garden devoid of wildlife!

Anyway I’ve finally managed to collate some photos of this year’s red mason bees. I blogged about these bees last year (Bee ‘n’ Bees | Too Lazy To Weed) so this kind of follows on with their story. Last year I’d bought a super-duper new bee hotel with viewing windows. At the end of last summer I was left with a number of the tubes in the hotel filled with red mason bee cocoons, all neatly separated by their little mud walls. 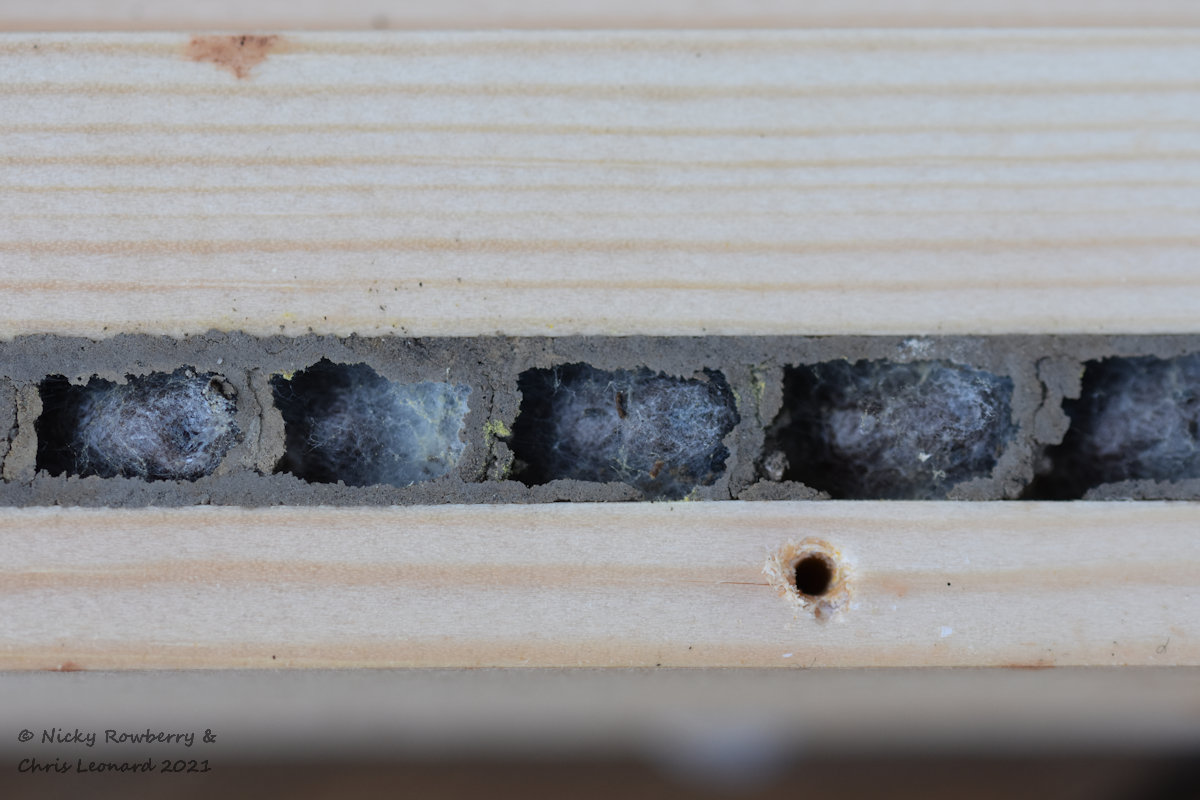 In February this year I removed the cocoons to allow me to clean out the chambers for reuse. The cocoons were safely stored in a special storage container, before being put out in the release chamber of the bee hotel, ready for them to emerge when conditions were right for them. It was fascinating to see these perfect little bundles, knowing they contained the next generation of red mason bees.

The bees started emerging in April, leaving behind their empty cocoons.

The males tend to emerge first and hang around waiting for the females. Their emergence coincides with the apple blossom, which is always alive with bees of all kinds, including the red masons.

When the females start to appear, the males go crazy buzzing round the hotels trying to be the first to mate. On some sunny days it was a real frenzy around the hotels.

The mating pairs often drop to the ground to “continue their business”, so we have to be very careful where we tread when walking passed the hotels.

Once mated the females start filling up the bee hotels with the next generation. Each egg is provisioned with fresh, bright yellow pollen and sealed in its little mud chamber. 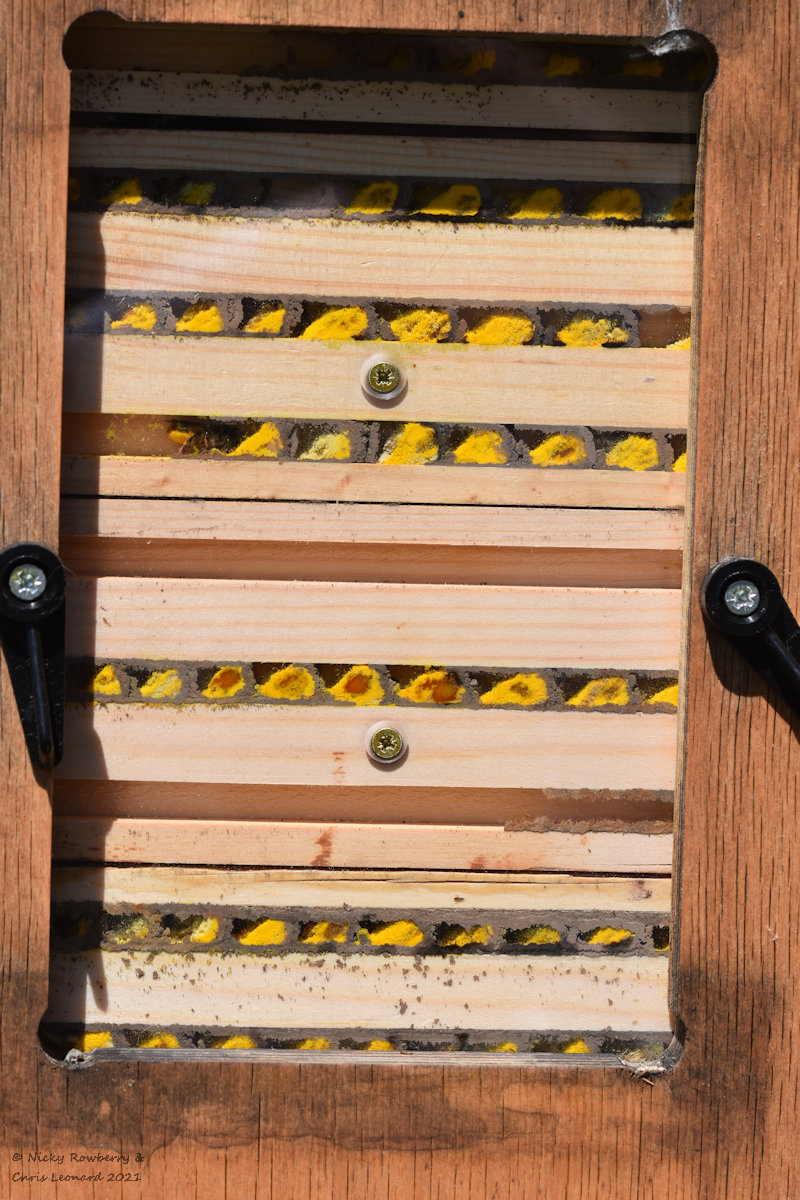 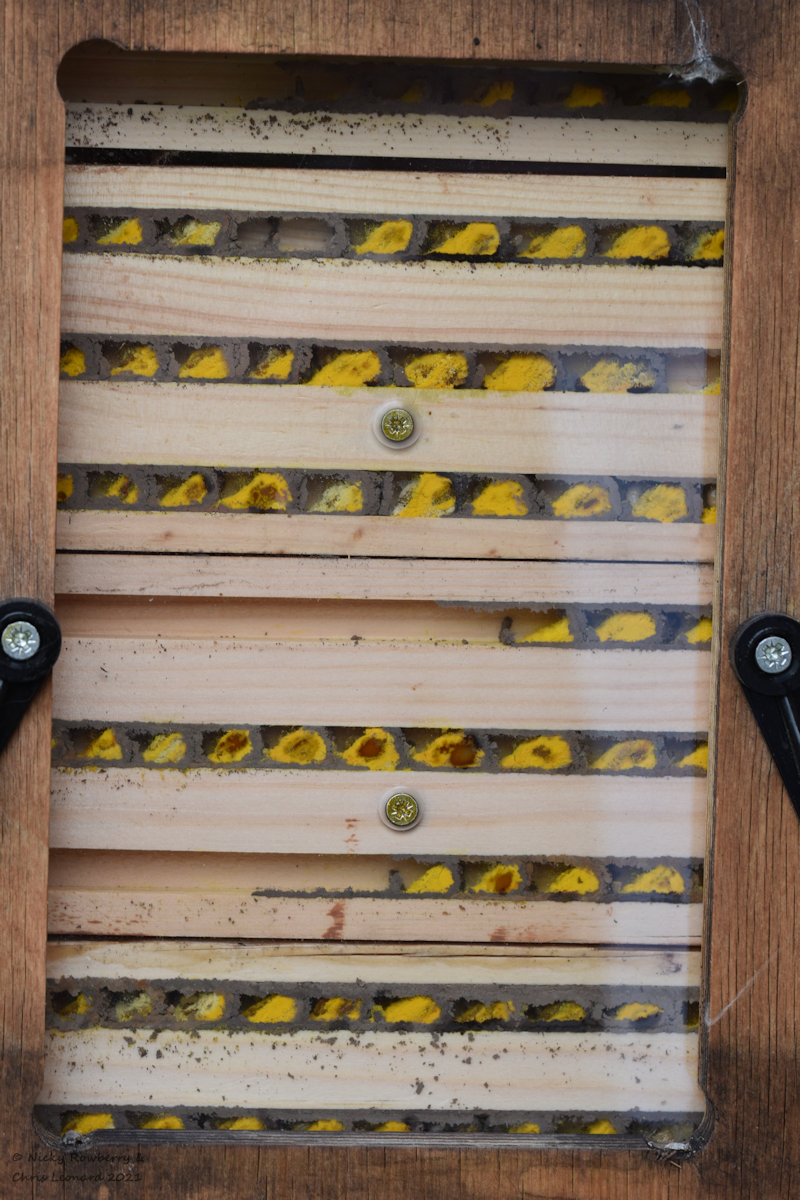 The female carries the pollen in a “pollen brush” consisting of hairs on the underside of her abdomen. She then uses her legs to scrape the pollen off the brush and deposit it in the new cell.

There are still a few females about, but the bee hotels are almost full and it’s coming to the end of their season. At the moment there are plenty of developing bee embryos, so the garden should be buzzing with red mason bees again next spring. One slight cloud (albeit a very pretty cloud) on the bee horizon is the presence of ruby-tailed wasps. These wasps parasitize the bee nests, laying their own eggs in there when they get the chance. There have been quite a few of these gorgeous looking wasps around this year, but hopefully the bees have laid enough eggs to spare a few for the wasps.

We have always tried to make our garden as bee friendly as possible – we garden organically, there are plenty of weeds providing nectar through most of the year and we put up bee hotels. We’ve had these regular bee hotels dotted around the garden for a few years and they’ve proved very popular with a few species, but most noticably the Red Mason Bees (Osmia bicornis). Every spring they are buzzing with bee activity and every spring I try and photograph/video them with mixed results. The Red Mason Bees have an ingenious system whereby the females lay female eggs at the back of the tubes first, followed by eggs destined to be males at the front. Because they are at the front the males emerge first and will initially feed a bit then they head back to the nest or bee hotel to wait for the virgin females to emerge.

The airways can get a bit congested as many males, desperate for their chance to mate with the females, jostle for position. Here’s a short video of a bunch of males doing just that – buzzing around, ever hopeful.

Red Mason bees are medium sized, solitary (despite the crowds around the bee hotel) bees with as the name suggest bright red hairs on their bodies. As they get older the hairs can fade or get worn away and they lose their bright red colour; the one in the photo below is probably fairly recently emerged. 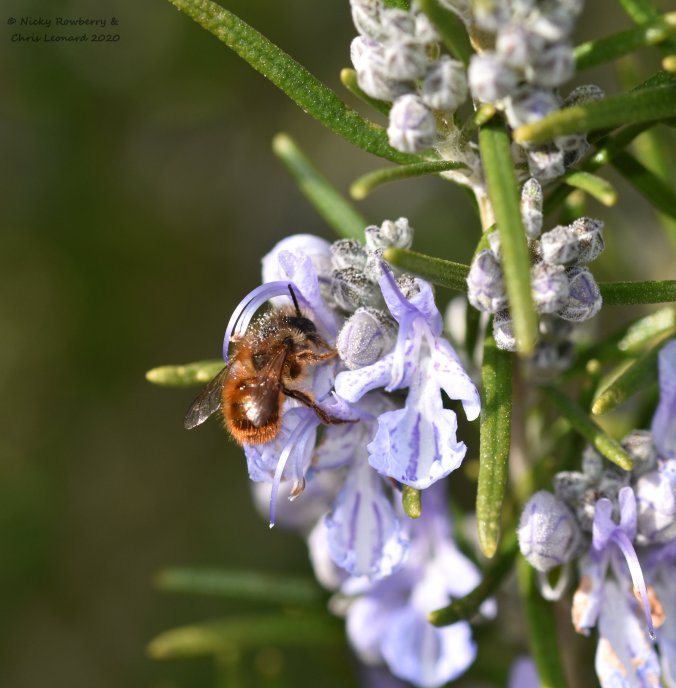 The males can get so excited at the prospect of the new females, that they will pounce on virtually anything roughly bee sized that appears, including each other. I found the trio in this next video on the path beneath a bee hotel. The female is the one on the bottom with two makes stacked on top of her. One of them is going to be very disappointed!

The mason bit of their name comes from their use of mud to form individual nest chambers for the larvae to develop in. Each tube in a bee hotel may contain several muddy chambers and the end of the tube is sealed off with damp mud, which then hardens to form a solid plug. Here she’s just deposited a fresh blob of mud which she works into position with her feet.

The Red Mason bees aren’t the only spring species to use the bee hotels, we also saw some Blue Mason bees (Osmia caerulescens). These were smaller than their red cousins and so tended to use the smaller tubes. I think this is a male which has more of a metallic green body with pale brown hairs. 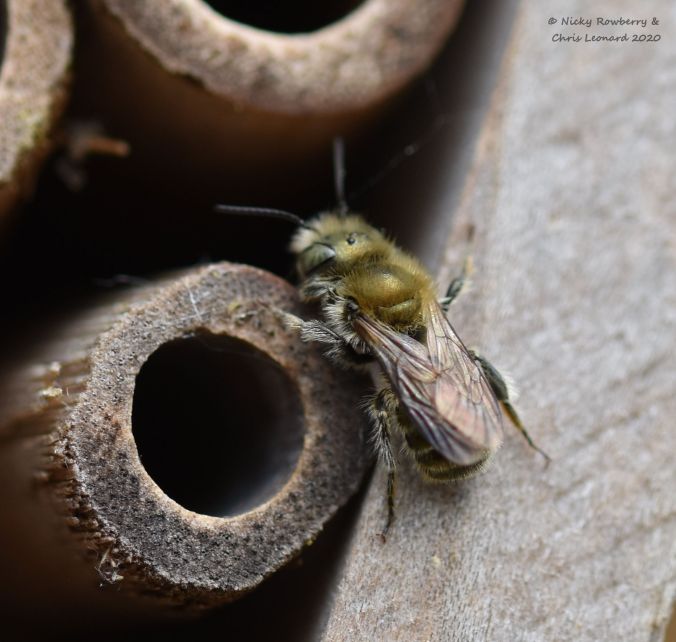 Beneath one set of bee hotels is our bench set on slabs, which in turn are set (somewhat unevenly it has to be said) on sand. While videoing the mason bees, we realised that there were also bees burrowing into the sand beneath us (I will blame them for any unevenness of the slabs). I’m not sure whether they are also mason bees, or something different, they didn’t stay still long enough to get a decent photo. But they were certainly busy bees.

So I’ve always been very happy with our bee hotels and then I saw this, the absolute Ritz of bee hotels. 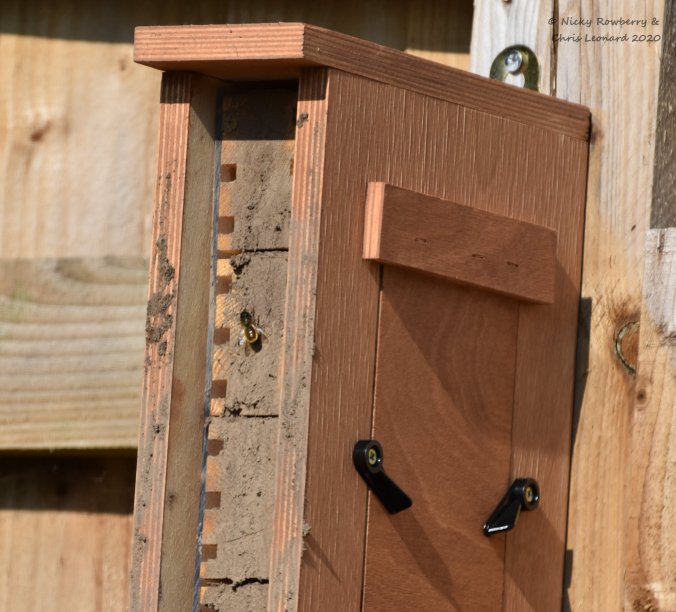 The inner section can be removed for storage and cleaning and the side panels can be removed to reveal a Perspex panel so that you can view the bees working away. So of course we had to get one! I waited patiently until the end of March then up it went on the fence wall ready for bee season. I got very excited when I spotted the first bee in one of the chambers.

Unfortunately the bees didn’t seem quite so excited by my deluxe offering and most seemed to stick with the old bee hotels. This may be because the old hotels with last year’s bee chambers in would have smelled of bees and so attracted the new generation back. In the end though I did get a few bees using the new box, although annoyingly most seemed to go for the tubes either above or below the viewing chamber. I did manage to get this video of one female stock-piling the pollen for her egg. She starts by rearranging the pollen that’s already in there and then turns around and uses her legs to brush the pollen off her body and add it to the pile.

Once there’s enough pollen in there, she will lay an egg in it and then seal that chamber and start work on the next.  By the end of the red mason bee season, I had several tubes full of developing larvae.

The eggs hatch into larvae and feed on the pollen that the mother bee has provided for them. 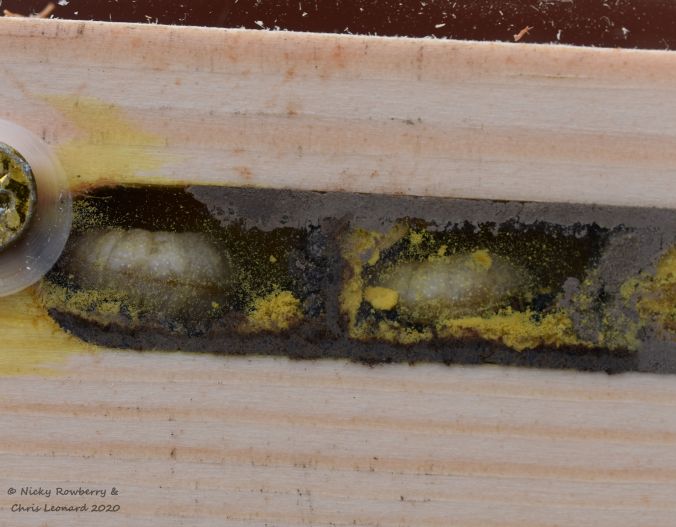 Once the larvae have eaten all the food they will spin a silk cocoon and pupate, turning into adult bees. They then stay in the cocoons like this through the winter, until the warmer spring days tell them it is time to emerge. Hopefully I will be able to get photos of these cocoons when the time comes. For the time being, the inner section of this deluxe bee hotel has been removed (complete with developing larvae) and is being safely (I hope) stored in the garage away from parasites. A new inner section has been put out which will hopefully attract the next season’s bees – the Leaf-cutter bees. Watch this space.

Video of ones nesting in sand – yes