It’s finally feeling like November here today – it’s bloody freezing! Far too cold to contemplate going out in the garden; much better to stick to the safety of the sofa and trawl through this year’s photos looking for memories of warmer days. Butterflies must be the ultimate symbols of sunny weather and this year the other half and I set out to see as many of the British species as we could. We’re still only about half way, having now seen 28 of the fifty-something species. Well it’s sort of 28 and a half species, as we went looking for a Purple Emperor, but only managed to find one sad little wing lying on the ground!

We’re lucky living in Worcestershire to have access to so many great nature reserves. First stop was the Wyre Forest where we saw our first Pearl Bordered Fritillaries. This is one of the UK’s most threatened species and the Wyre Forest is managed to provide suitable habitat for them, with great success. We also managed to get our best photos yet of the Common Blue butterfly, thankfully not as endangered, but just as beautiful all the same.

We’d hoped to see White Admirals at Monkwood, but figured it was a long shot; but as we got out of the car, two flew over our heads across the carpark. White Admirals are on the decline too, so we were really chuffed to have ticked them off the list. Spotting them turned out to be the easy bit, getting a photo a bit trickier. Fortunately Monkwood is full of other species that kept us snapping photos, such as some very obliging Large Skippers (left photo), who seemed so keen to be photographed they might as well have taken selfies. Eventually though one White Admiral settled long enough to get some decent shots. 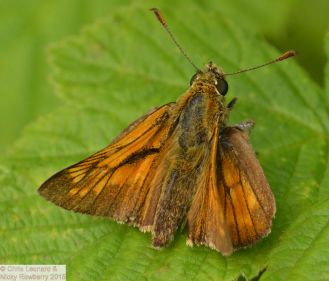 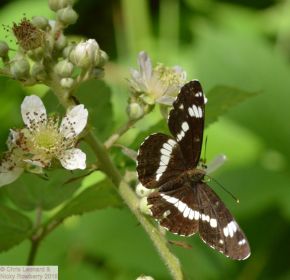 Trench Wood provided our best views so far of Silver Washed Fritillaries – previously only seen in a pub carpark. These large stunning butterflies (photographed here with a Meadow Brown) are fairly common in Trench Wood and seem way to exotic for the Midlands!

Grafton Wood is a stronghold for the endangered Brown Hairstreak butterfly. This is a very small butterfly and notoriously difficult to see, let alone get a photo of, so we didn’t hold out much hope. What we hadn’t counted on was that you don’t have to spot the butterfly, you just have to spot the crowd of butterfly hunters, clustered round a particular bush. Sure enough a few polite questions later and we’d “bagged” our first brown hairstreak photos. It really is a beautiful creature, but has suffered greatly from habitat loss, so we’re very lucky to be able to see them at Grafton. 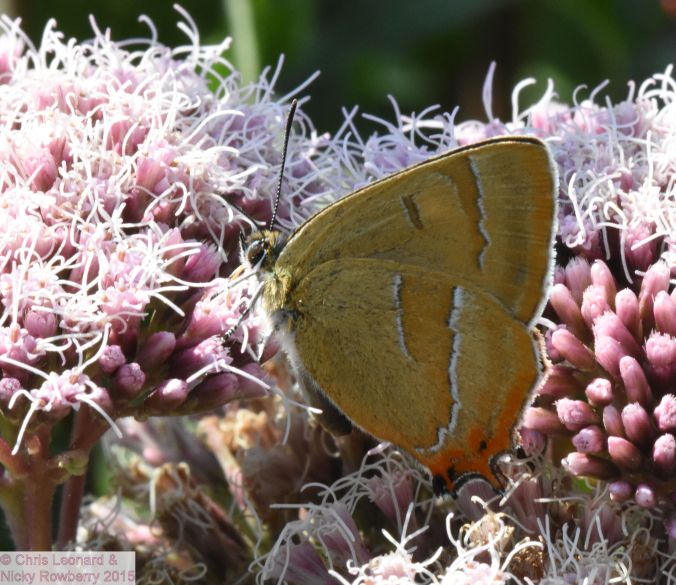 Sometimes though you don’t need to go very far at all to see something unusual. The other half came back from a walk one day, having taken a few photos of butterflies at the edge of his workplace. He downloaded them and then casually mentioned that “this one looks a bit different”. Turned out it was a White Letter Hairstreak – a new one for our list (or his list as of course I hadn’t actually seen it at this point). Butterfly envy then took hold, until I managed to bag one of these too and peace was restored.

Top of the list for next season’s butterfly bagging – a complete and preferably living Purple Emperor!

One thought on “Fair Weather Friends”