Whilst waiting for my trail camera skills to miraculously perfect themselves, I decided to run the moth trap at the weekend. It was cold but dry at least, so I ran the trap both Friday and Saturday night. Friday drew a complete blank, but Saturday produced the huge haul of 2 moths, bringing my grand total for the year so far to 3 moths – at this rate I should hit double figures by about June! The Garden Moth Scheme starts in a few weeks’ time, so I hope numbers pick up a bit by then.

One of my 2 prize specimens this weekend was another Common Quaker (also the one moth to be trapped in January). The Quaker moths are apparently so-named because they’re supposed to look dowdy and dull and not given to flashy colours – appearances of which the religious Quakers would have approved. But looking at the photos I think they have a more subtle charm and aren’t deserving of their drab reputation. Admittedly the one on the left isn’t looking his or her best on a bit of kitchen paper, but I’m to blame for the aesthetics of this photo, not the moth. Once it had flown down onto the soil, the camouflage potential of its subtle colouring becomes clearer as it blends in with the dead leaves – bright colours are all very well, unless they get you eaten! 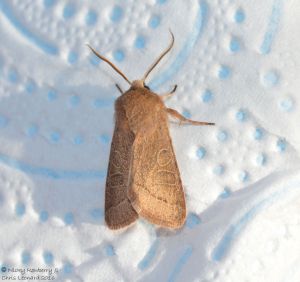 The second intrepid February moth was a male Dotted Border. I’m not usually so confident at sexing my moths, but with this one it is easy, as the female of the species has got a really duff deal. The Dotted Border is one of the relatively few British species where the female is flightless – they have only stumpy vestigial wings. This seems wholly unfair to me – surely the great joy of being a moth (on the slightly romantic assumption that moths can experience great joy!) is being able to fly! The poor down-trodden females just have to sit and wait for the Mr Dotted Border to come and visit. The moth on the left is my lucky male (again apologies for lack of aesthetic photo, he blew away before I could get better) and the one on the right is the female. This photo comes courtesy of the Wikimedia Commons website (so free to copy here), as I’ve yet to find a female in the garden here. 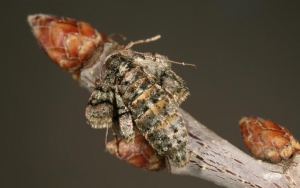