The dunnocks in our garden are clearly getting frisky. They’re normally quite shy birds staying out of sight in our plentiful undergrowth, but this week I caught them displaying in a quite amazing fashion. (Look away now if you don’t want to see parts of a dunnock that are maybe best left to the imagination!)

I caught this pair outside the patio doors while I lolled on the sofa – fortunately for once a camera was within reach. As I hadn’t been anticipating a photo shoot, conditions weren’t ideal – I had to try and focus over the coffee table and dodge the cat’s scratch post; both of which obscured my view a bit, but I didn’t want to move and alert the dunnocks to my presence. So apologies if the photos aren’t quite as sharp as I’d have liked.

I thought at first the pair were just rooting about for food – and indeed that did seem to be what the male was mainly interested in. But the female started behaving very oddly. I thought at first there was something wrong with her – she seemed to be repeatedly straining her rear end (cloaca as I’ve since found out) while fluffing her feathers at the male. He didn’t seem particularly interested in her antics – can’t say I blame him, it wasn’t an attractive dance she did! The photos show her rear end in various stages of flexing (I did warn you to look away!) 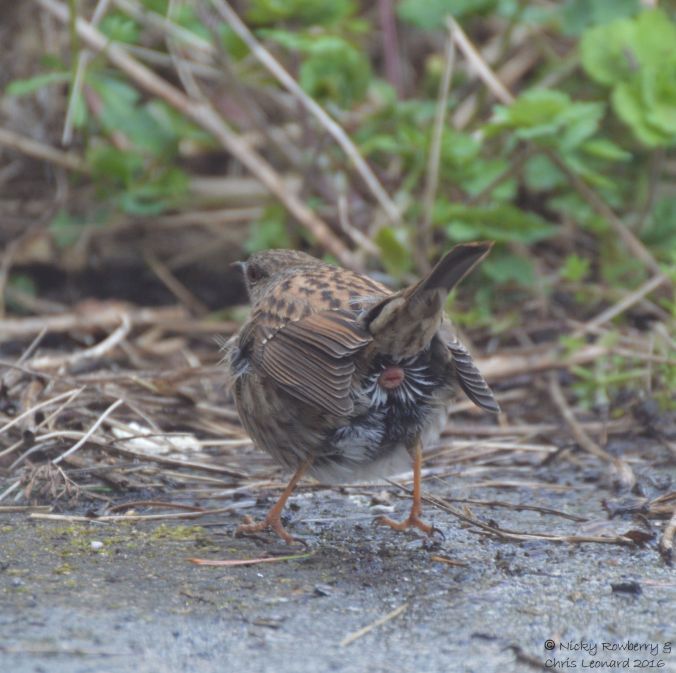 A quick bit of googling revealed that female dunnocks may mate with more than one male and that the males will peck at her cloaca to get her to eject the previous male’s sperm. This female seemed to be actively encouraging him to do so. I’d never heard of this behaviour, let alone seen it.  So you learn something new every day – even when just lolling about on your sofa!