Yesterday’s expedition produced not only the result we’d set out for, but a completely unexpected bonus. We’d set out in search of Wood White butterflies – a species neither of us had ever seen before, so one on our hit list to “bag” this year. The new Butterflies of the West Midlands book suggested a walk in Haugh Wood, Herefordshire so we ventured forth once again – it’s becoming a bit of a weekend habit this abandonment of our sofas!

Haugh Woods (there seems to be some debate as to whether it is pronounced Haugh as in Laugh or Hoff as in The Hoff!) is run by the Forestry Commission and is a nationally important wood for butterflies – in particular the Wood White. The Wood White is a nationally vulnerable species, so we’re lucky to have a colony close enough to visit.

The first white butterfly to show its wings though was a Green Veined White. Of course it took a bit of chasing around to confirm that it wasn’t a Wood White – we didn’t discover how small the Woodies were until later on. Still the Green Veined was lovely to see, even if it refused to pose its wings properly upright to see the veins. 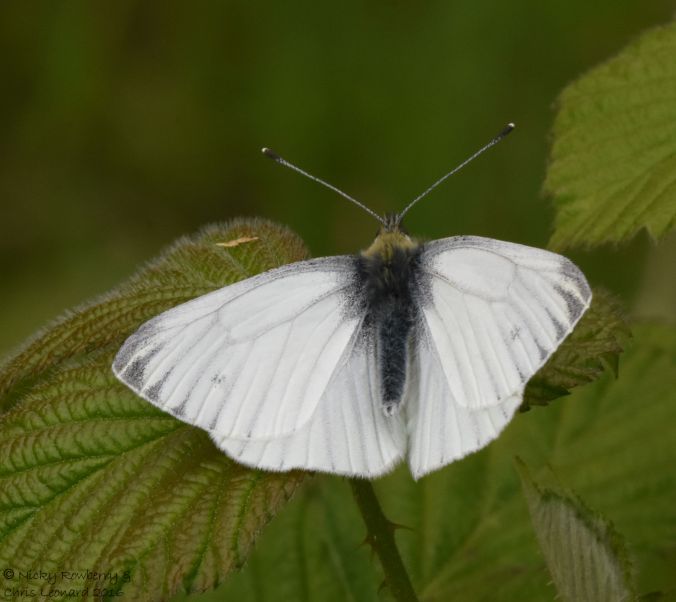 It wasn’t long though before another much smaller white flapped by – again it took a bit of chasing around until it stopped long enough to confirm a Wood White. They’re really much smaller than I’d expected and not the most energetic of butterflies, which was good news for us pursuing them! 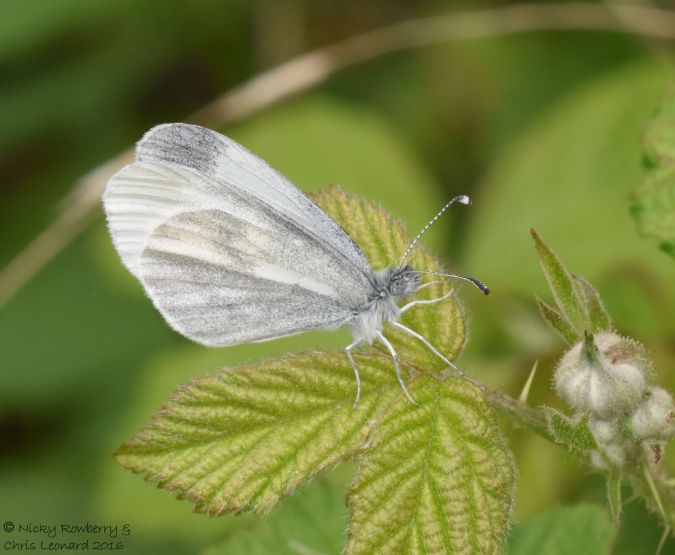 We eventually saw several more once the showers passed and the sun came out again. I think both these photos are of males, which apparently have a white spot near the inside end of their antennae.

Near the end of our walk a third white species showed up – a female Orange Tip. We didn’t spot any males, but there must have been at least one around, as evidenced by the fact that she was laying eggs! The female lays one egg at a time and if you look carefully you can just about see the egg here on the underside of the more or less horizontal stem at the point where it meets the more or less vertical stem. At least we think that’s an egg! They’re pale green to start with then go orange.

Throughout the wood we’d also been seeing Speckled Yellow moths flitting about. They are notoriously difficult to photograph, but we finally chased one down back near the carpark.

The wood was full of ants, in places forming huge ants nests. Chris managed to get this really good shot of a couple of ants on spurge. Only trouble is we’ve no idea of the species, so if anyone can ID these, it would be much appreciated.

The real bonus of the trip though was something we only discovered we’d seen when we got back home and downloaded the photos. Chris had spotted what we thought was a caterpillar trundling across the path, so we’d taken a few snaps and then moved it to safety (probably a good job we moved it, as we had to double back down the path a few minutes later having got lost despite the very clear path markers – I’d hate to  have trodden on it!) 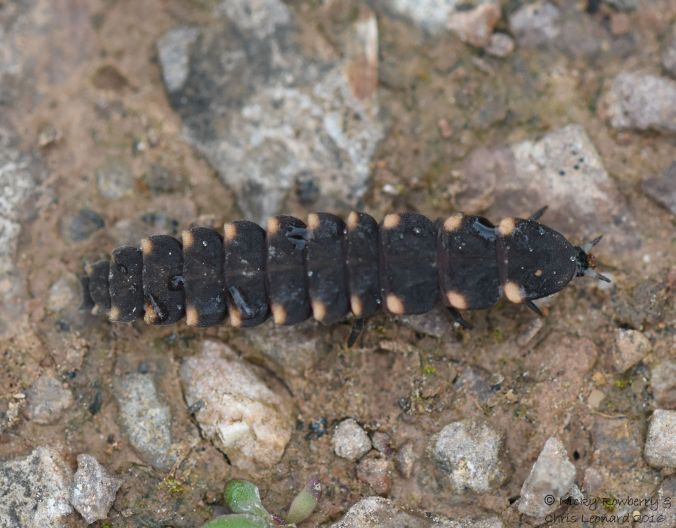 Looking at the photos properly back home, it didn’t look like a caterpillar at all. A quick google combined with a plea for help on Facebook and iSpot, confirmed we’d found a Glow Worm larva. It is principally the adult females that glow, although the larvae do glow a bit, but obviously not at 11:30 on a Sunday morning while tootling along a path! So it was hardly a bioluminescent spectacle (like the recent, excellent David Attenborough programme on the phenomenon), but we can still say we’ve seen a glow worm, so I’m happy with that. I feel a trip back to Haugh Woods in the dark may be coming up some time soon though!