Can’t believe it’s Day 21 of 30 Days Wild already! Not only that, but we’re beyond the longest day of the year so winter is officially on its way! Fortunately it didn’t feel like winter today and I went for a really nice relaxing walk to Melrose Farm Meadows nature reserve. Well I say I went on a walk there, I think I may actually have got lost and been wandering round some random field instead – but it was still very nice.

Melrose Farm Meadows is a small reserve consisting an old orchard and 2 small meadows. I definitely found the entrance as I saw this sign, but I think I maybe took the wrong footpath as I ended up in a big field with few trees – certainly not an orchard. As you’re supposed to keep to the paths here, I didn’t want to risk straying into the wrong bit, but I do at least think I know where I took the wrong turn, so I’ll hopefully find the orchard next time. Doh!

Anyway, wherever I was, the sun was shining and there were plenty of butterflies, so it was a result in my book! The fields were full of wildflowers which I think included Knapweed, Ragged Robin (although this might have been just a ragged Knapweed), Self Heal, as well of course as the usual buttercups and cow parsley. 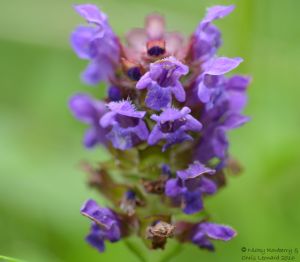 The hedgerows were full of brambles and wild roses, both of which were attracting large numbers of bees and hoverflies. There was one particularly dense thicket of brambles, that was also covered in butterflies, jostling with the bees for position. I thought at first they were all Meadow Browns, but then I spotted a darker one which turned out to be my first Ringlet of the year. Shame about the thorn from the brambles obscuring part of the butterfly though! 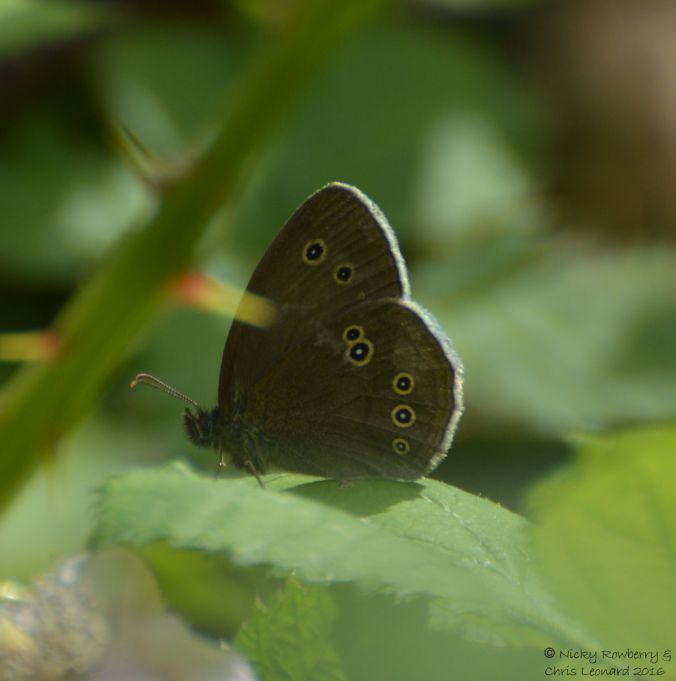 The fields themselves were full of Meadow Browns. At one point with the sun shining, they were floating up and down over the grasses as far as I could see. It was an incredibly peaceful thing to watch and was sort of how I feel meadows should be – bathed in sunlight with butterflies flitting lazily around. It felt like a taste of bygone times.

Speckled Woods tended to stick to the hedgerows rather than the open fields and I saw several patrolling the brambles.

A couple of Large Skipper butterflies were darting around the field too – they have a much faster more erratic flight than the Meadow Browns and were harder to get a photo of.

The highlight of the afternoon though was spotting my first Marbled White of the year. As is always the way, I had the wrong camera lens on when it first appeared, then there was grass in the way, then I got greedy and tried to get too close and of course it flew off. So these less than perfect photos were the best I could manage. 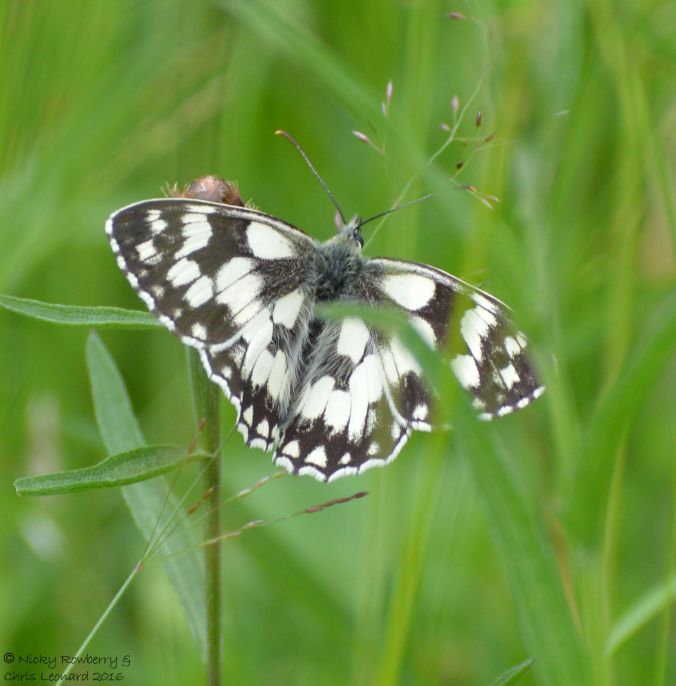 Marbled Whites have always been one of my favourites. When we first started butterfly watching they were the first species we actively went out looking for. I can still remember how excited we were when we spotted our first one at Knapp & Papermill reserve – at the time I thought we’d never get a decent photo of one. Looking at today’s efforts, it seems nothing much has changed there!

And finally today’s weed in my 30 Lazy Garden Weeds – is the Clover. If you want a pristine garden lawn then I understand that clover is probably the enemy. But why would you want a pristine lawn when you can have one full of flowers and wildlife. The bees like the clover, so it’s fine by me. Clover is actually very good for the soil – it fixes nitrogen, so is good for green composting. Clovers famously have 3 leaves, unless of course you are lucky enough to find the elusive 4 leaved clover – a real prize when I was a child to find such a thing.