Happiness is a Hedgehog come Home! Very happy to report that this evening the male hedgehog that we’d rescued from our baking hot lawn a couple of months ago has recovered and been returned to the Too Lazy garden. We picked him up tonight from the Malvern Hedgehog Rescue, where he’d been cared for by the wonderful Viv. Viv had named him Fred (and his sister is Freda).

When we found the babies in July they were too small to survive on their own and at the time we feared that something must have happened to the parents. You can read about their initial rescue on the original blog post here: https://toolazytoweed.uk/2016/07/19/too-hot-for-hedgehogs/

This is what the babies looked like when we found them in July – way too small to be out on their own. 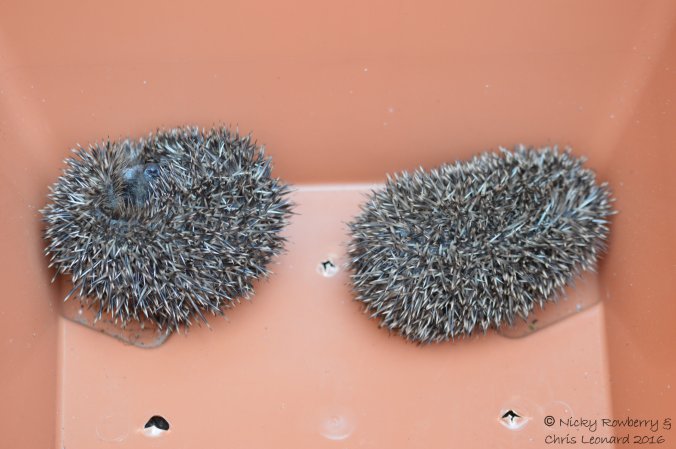 And this is what Fred looks like now, admittedly looking a bit sulky in the cat box we brought him back in tonight.

He is now big and round and weighs a healthy 600g or so, compared to only about 90g when we found him. His sister is still not quite big enough to be released, but even when she is, she will probably go to another garden. Instead we will get a different rescued female back – so that we don’t end up with brother and sister – we don’t want any dodgy soap type plots going on in our garden! Fred has also been microchipped, so that should he decide our garden is not desirable enough (maybe he’ll want a tidier garden?) and is found in trouble elsewhere, Viv at Malvern Hedgehog Rescue will know his history.

We brought him home early evening but had to wait until dusk to release him. I opened the cat basket next to a positive buffet of hoggy food and waited for him to come out. I was so excited with this, I even missed the first half of Great British Bake Off to wait for him to emerge! If I could have got hold of the Born Free music, I would have been tempted to go for it. Half an hour later he emerged, had a bit of a scratch and headed straight for the food. This bodes well for his future! It was too dark for decent photos with the camera, but I did manage to get one with a flash (didn’t want to take many with the flash though and frighten him on his first night back).

Fortunately for once I’d got the trail camera pointed in roughly the right direction, so it picked up Fred’s first forays back out in the wild.

He didn’t hang around for long before he headed off into our abundant weeds. With a bit of luck, Fred will settle back into our neighbourhood. We still have at least one other adult hedgehog using the garden – possibly even one of Fred’s parents. Hopefully there won’t be any family agro between them!

If anyone finds a hedgehog in need of help in Malvern the rescue centre details can be found at http://www.malvernhedgehogrescue.co.uk/ It is run on a completely voluntary basis and relies on donations, so if anyone can help towards her running costs, please donate – either as a direct donation or by donating foods, cleaning materials, help towards vet bills etc.