Today has been all about the birds. It started when I switched on the tv to check our new nest box camera. I was amazed to discover something had left a “deposit” in the box  – clearly visible via the camera. Never have I been so excited by a poop in a box! While regaling Chris with the momentous event, it got even better – a blue tit appeared on screen in the box, had a look around and removed the poop. We hadn’t yet got the software to record the video feed (that arrived in the post about an hour later of course!) and I was too surprised to even grab the camera to take a photo of the telly. So you’ll just have to take my word for it. (I could post a photo of the stain left by the poop but that is probably more than anyone wants to see) Hopefully this is all a sign that the blue tits approve of the box and will start using it as more than a toilet in the next few weeks.

The main focus of this weekend though is the annual Big Garden Birdwatch – one of my favourite examples of citizen science. This birdwatch is also the world’s largest wildlife survey – an amazing achievement. We’ve been making sure the bird feeders have been well topped up the last few weeks and there have certainly been plenty of birds in the garden recently.

So I sat down late morning in the garden to do my allotted hour of bird watching; camera and notepad at the ready. Although not everything showed up in the hour, I was really chuffed to record 14 species and 30 individuals – a significant improvement on last year when I only got 21 individuals of 7 species. I do love a graph and the RSPB sent me this little pie chart (well half a pie) of 10 of my species.

So topping the list was the house sparrow with 12 birds – I’m sure we actually have about 20, but I could only manage to count 12 at any one time. Last year I counted for the hour then took photos afterwards. This year I tried to get photos of everything as I counted them, although the best I could manage was 2 sparrows in one shot. I’d tucked myself away in the corner of a garden so that I disturbed the birds as little as possible, so I was actually a bit far away for taking photos – hence the dubious quality in some cases (excuses, excuses). 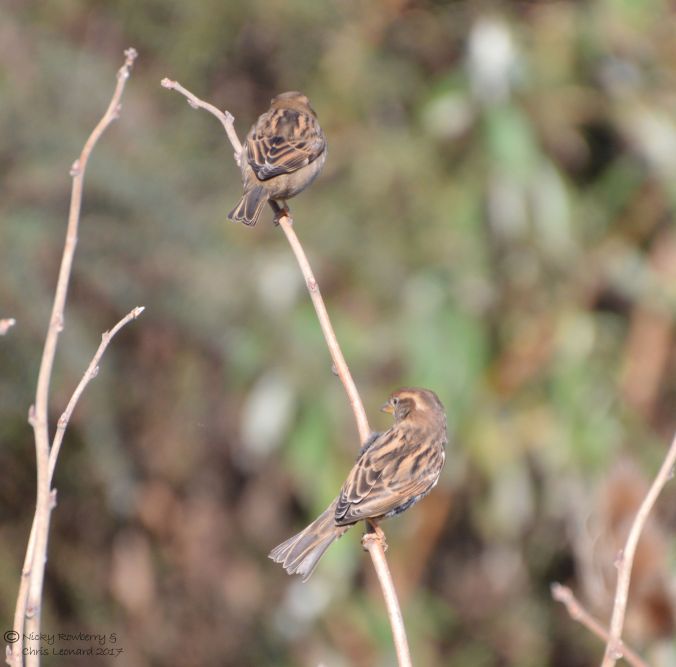 The next most common bird today was the jackdaw – three appeared but only two ever seemed to land at the same time. 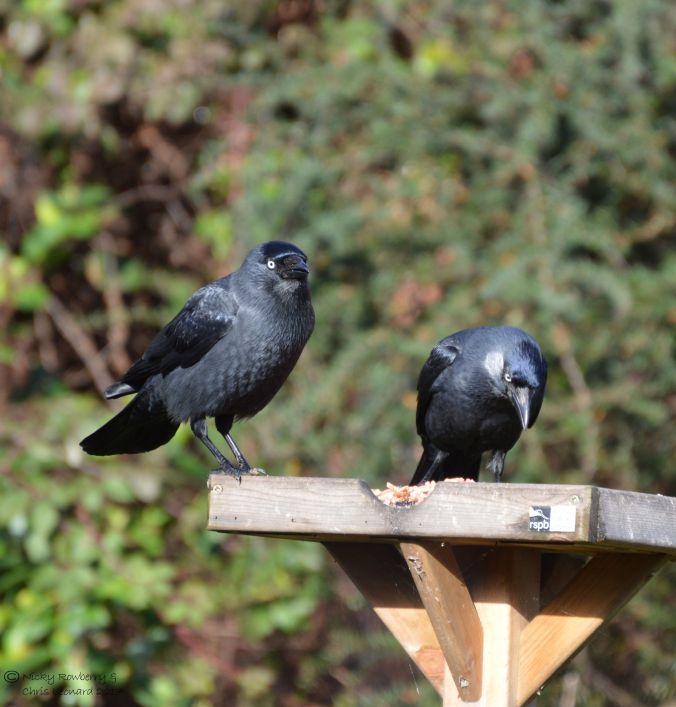 We’ve got a pair of blackcaps that regularly visit the garden and both male and female showed up within the hour. The female was more nervous though so I only got a shot of the male.

The robin, a starling (one of 4 we sometimes get) and the song thrush all turned up on cue for a change. 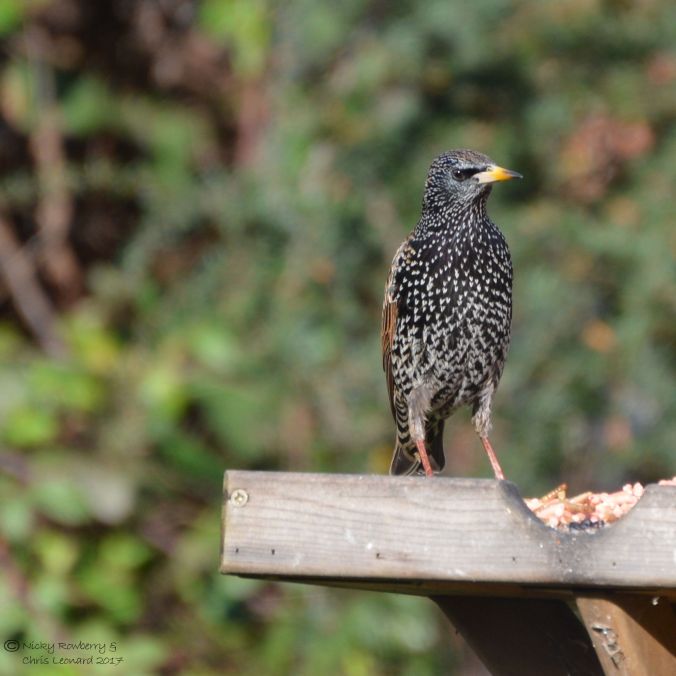 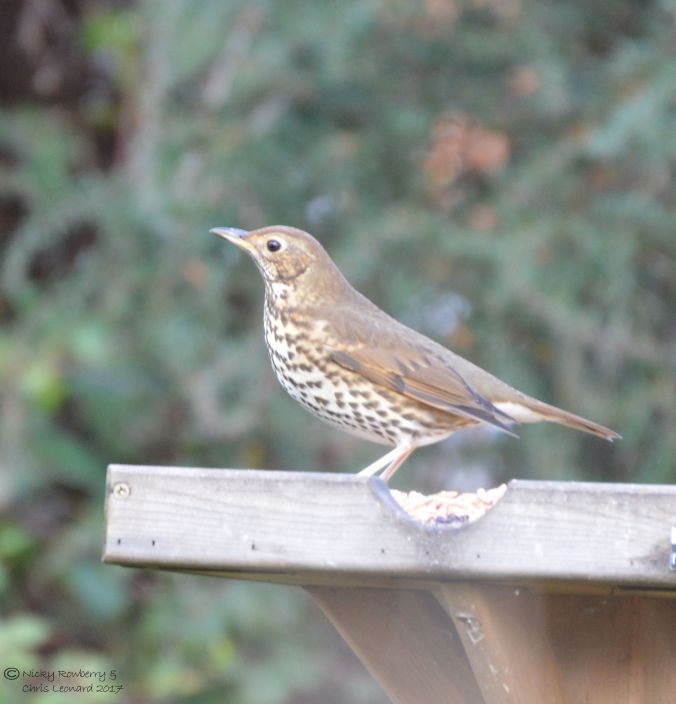 Earlier in the morning I’d seen several long-tailed tits, a great tit and a pair of blue tits. Of these only a single blue tit deigned to put in an appearance during the hour.

I’d put up a new niger seed feeder just a couple of days ago and the goldfinches had found it almost immediately. I’d seen 3 or 4 of them on it yesterday, but today I was grateful when just one arrived. Unfortunately when positioning the niger seeds I hadn’t considered trying to take photos from the other side of the tree – so there’s a few too many twigs in the way!

A magpie, a dunnock and a wood pigeon all appeared briefly, but out of range of the camera. The final bird was a wren. This wren has been tormenting me for weeks. It has a tendency to appear whenever I’m in the garden without the camera. If I do have the camera, it appears but hides behind as many twigs/branches/weeds as it can find. So believe it or not this is probably the best photo I’ve ever managed to get of it – which isn’t saying much! 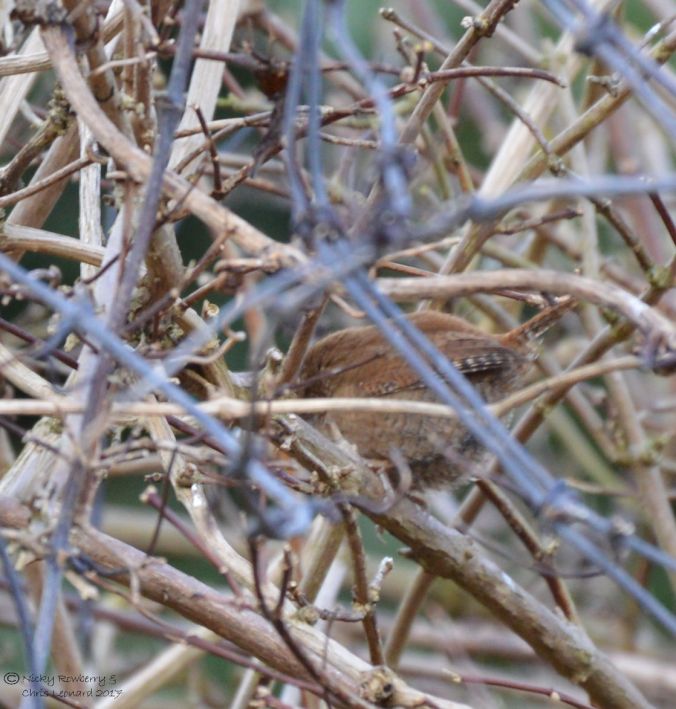 I’d had the trail camera on while I was counting, just in case it could pick up something I’d missed. It didn’t spot anything different, but it did film this goldfinch – probably the same one I photographed from the other side of the tree.

Of course once the hour was up and I was back on the sofa, the birds returned en masse to taunt me. Leading the mockery was the woodpecker, which I haven’t seen for weeks but chose to land on the bird table just after I’d submitted my results. The long-tailed tits flew back in and the wren perched on the most photogenic spots possible – safe in the knowledge that I couldn’t get a photo from this distance!

Anyone thinking of taking part in the birdwatch has until Monday to have a go. Full details on: https://ww2.rspb.org.uk/get-involved/activities/birdwatch

As I now have the image capture software all loaded, I will probably be spending the rest of the weekend watching an empty nest box with only a dubious stain on the bottom!