It’s day 4 of 30 Days Wild and I spent the morning taking more photos of the wildlife for our Garden Bioblitz. I’d started the bioblitz at about 09:30 yesterday, so I was trying to cram in as many more species as I could before 09:30 this morning. This wasn’t helped by the fact that my camera has packed in (I hope temporarily) so I was having to use Chris’s camera and swap lenses back and forth.

The day started at 04:30 to beat the birds to the contents of the moth trap. I had hoped for a good haul to boost my species tally, but the trap was fairly quiet – possibly because it had been quite windy last night. Still there were some nice moths including a few of these beautiful and distinctive Angle Shades – virtually impossible to mistake these for anything else, which I like in a moth!

Star of the moth show was the Elephant Hawkmoth making a timely debut for the year in our garden. I’ll never tire of these stunning moths with their bright pink bodies. If you were to make a toy moth, I reckon this would be it. 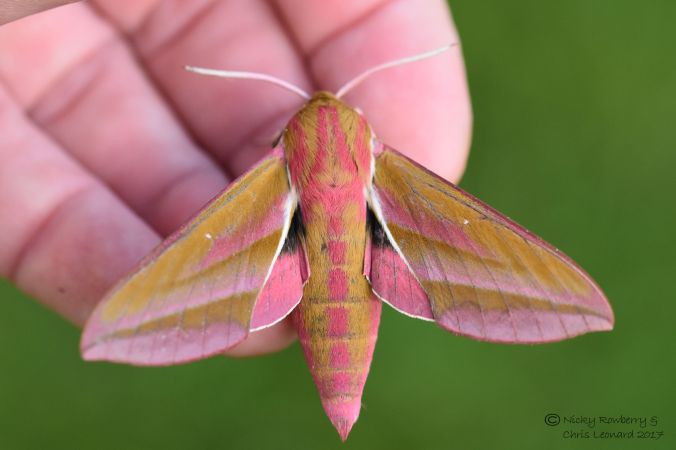 I put a specimen of each moth in the fridge (it does no harm but keeps them calm until  you can photograph them) and went back to bed for a couple of hours. 8 o’clock though and I was back up photographing said moths, then scouring the garden for more wildlife. I hadn’t managed to photograph any birds yesterday, so I topped up the feeders and waited expectantly to see what would show up. As usual the sparrows were the first to show, landing on last year’s teasels to check things out before heading to the bird table.

The starlings and jackdaws came next, followed by the blackbirds and pigeons.

There were several no shows for birds that normally frequent the garden – no sign of the robin, wren, collared doves, great tits or gold finches. A blue tit just appeared in the last minutes to scrape into the bioblitz total. For the last few days I’d been seeing a big black bird, bigger then the jackdaws, so was disappointed initially when it didn’t show for the camera. But then I downloaded the trail camera which had been running for the last couple of days and there he was – a carrion crow.

The trail cam also picked up a couple of hedgehogs – one of which looks like our old foster hedgehog Meadow – i.e. it was a big chunky looking hog!

There were of course bees in the garden, although being a busy bee myself chasing everything else around I didn’t actually manage to get that many photos of them. But here are two favourites – a Buff-tailed Bumblebee and a Common Carder Bee. 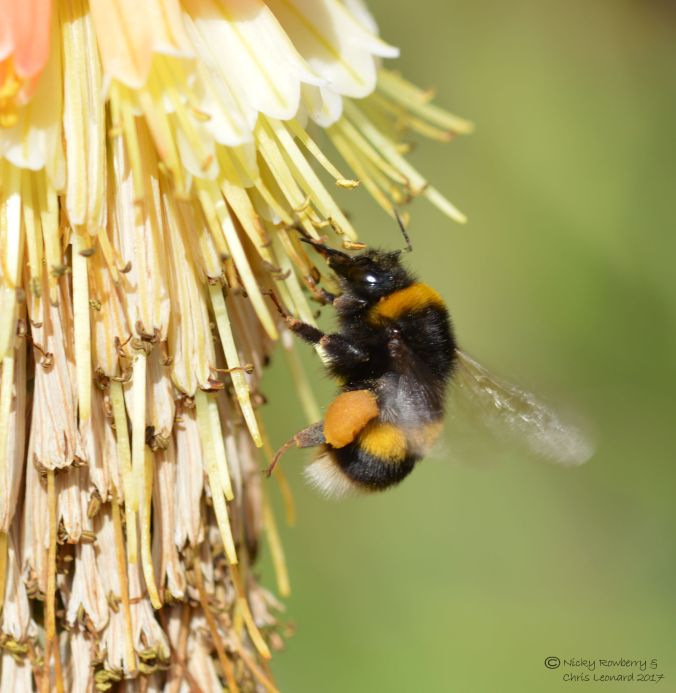 There was also this bumblebee mimicking hoverfly (Merodon equestris).

Our snails were also being sneeky and hiding away over the last 24 hours – several species that I know we get refused to show. Fortunately both the White Lipped (top) and Brown Lipped (below) appeared out of the Pendulous Sedge to get their photos taken.

I also found three species of slug including this large yellow one and the stripy ones which I think are Iberian slugs. 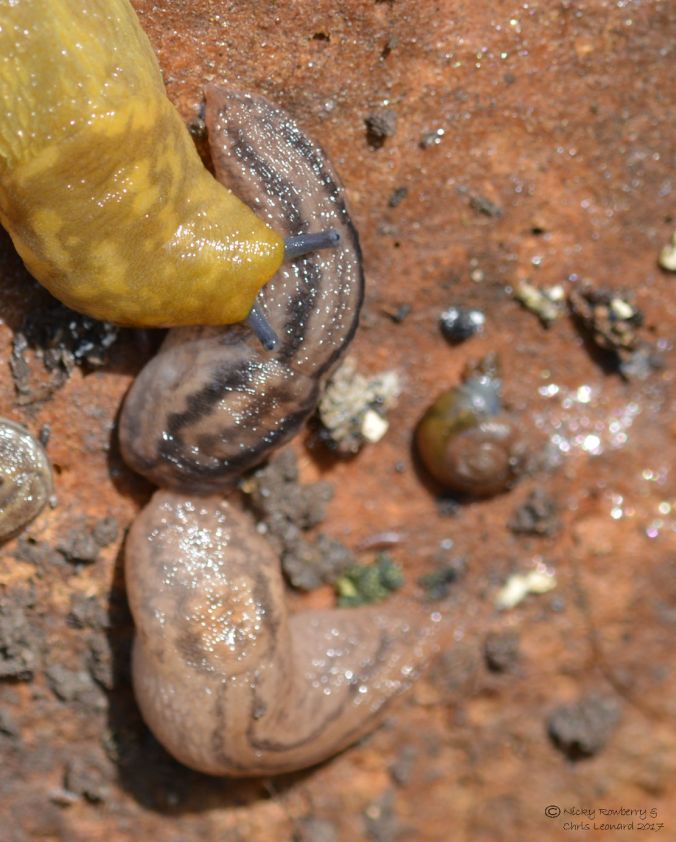 I spotted this tiny nymph of the Speckled Bush Cricket, when I saw its antennae poking over the edge of a buttercup. Unfortunately the buttercup was blowing about in the wind a bit – hence the less than perfect focussing! 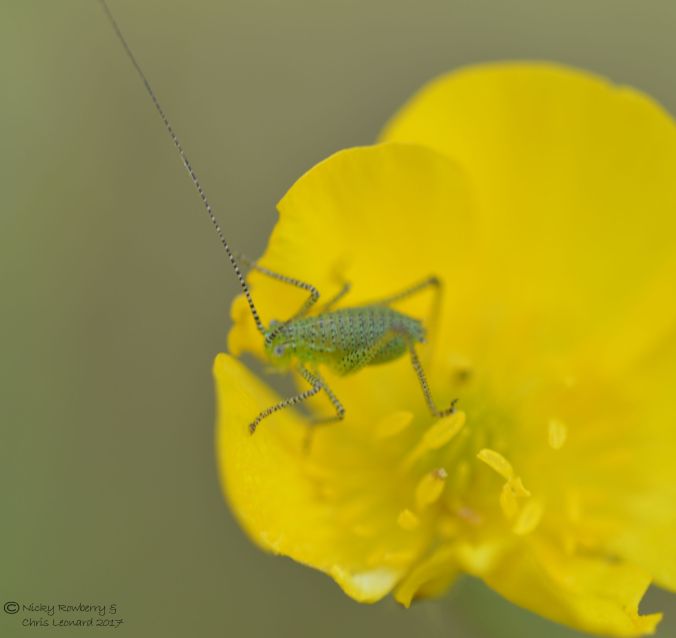 While turning over stones, I disturbed loads of woodlice. The top one is a Common Striped Woodlouse and the ones below that are Common Rough Woodlice. The bottom pinky one may just be a variant of the latter, but I hoping it might be a 3rd species – just waiting for someone on i-Spot to confirm one way or another. 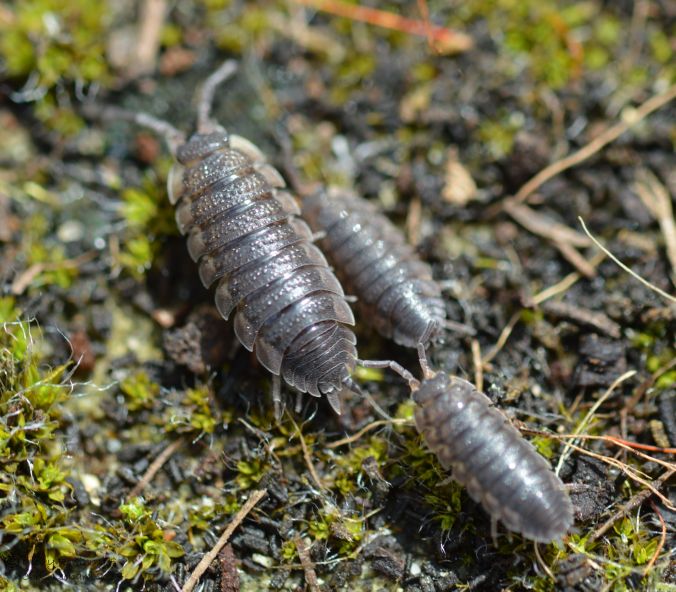 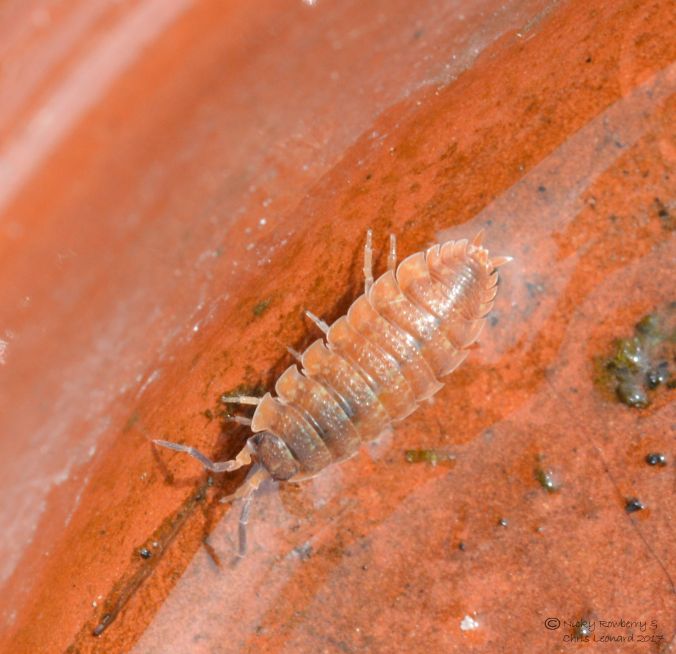 Beetles are the largest insect group in the world, so it would have been a bit weird if I hadn’t found any in the garden. My favourite Swollen-thighed beetle of course appeared, but so did this lovely shiny Black Clock Beetle.

This tiny carpet beetle was making the most of the flowers. 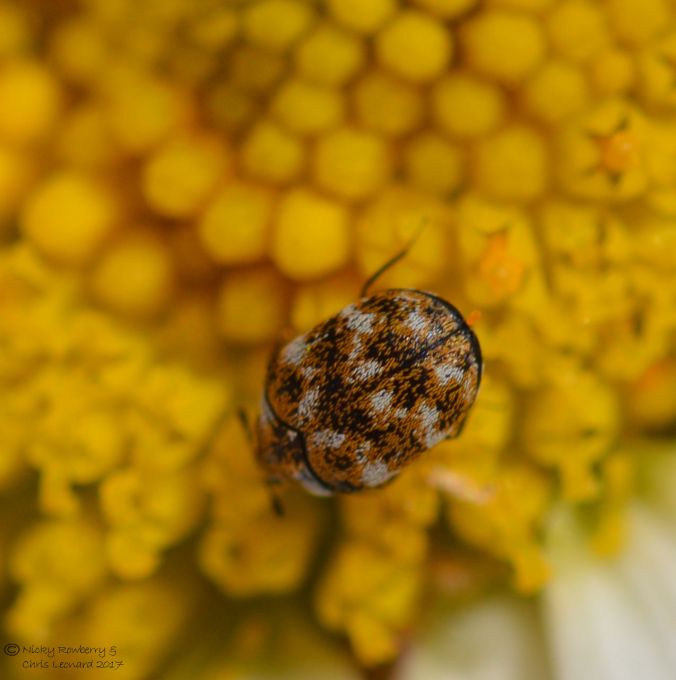 One group I’ve never really studied is the centipedes/millipedes. This beauty turned up under an old piece of wood. I’ve yet to work out the species though (suggestions gratefully received).

So that’s a selection of our bioblitz species for 2017. As always I ran out of time, so didn’t manage to root about in the pond, or look for ants, flies, grass moths and a host of other things. It was also a bit disappointing that no butterflies or shieldbugs or ladybirds appeared in the last 24 hours, but then that’s the way it goes. The bioblitz is just a snapshot of what you can find in the garden over a day. I love that it gets me looking for groups that I don’t normally study (easy to get in a bit of a rut with the bees and moths and butterflies and forget the others sometimes) – always good to broaden my wildlife horizons.

I’m still identifying photos and gradually uploading them to the i-Record website, so I won’t know the final tally for a while yet. So far I’ve only managed to load 32 species, which apparently puts me 10th on the bioblitz league table. Sounds good until I realised the person in the top spot at the moment has 167 species – I’ve got a way to go yet! 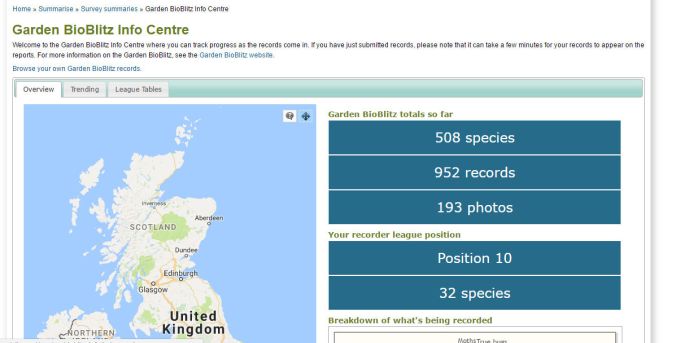