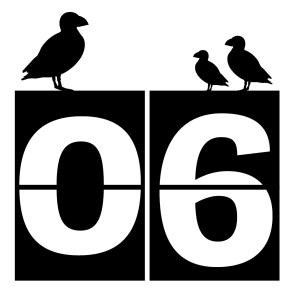 It’s day 6 of 30 Days Wild and a wet and windy one it is too. The car is in for its MOT so I can’t really head off to find anywhere drier either! By the time I’d trudged home from the garage I was well and truly braced! There didn’t initially seem much scope for wildness today, until I considered that the weather itself was more than wild enough to be the focus of today’s activities.

I don’t have an anemometer to measure wind speed, but the BBC weather app (an app I do actually use regularly) reckoned there were gusts of up to 48mph in our area. Our weather vane thingy was certainly going like the clappers. After our photographer friend Anna stayed last week, Chris had been having a go with different settings on the camera. So in an unusually bold move for me, I thought I’d have a go off the auto setting and copied his idea of taking a photo of the weather vane on a  really slow shutter speed to capture the movement. (Of course I could have just made a short video!) Anyway I was quite pleased by the blurring effect as the wheels whirred round. 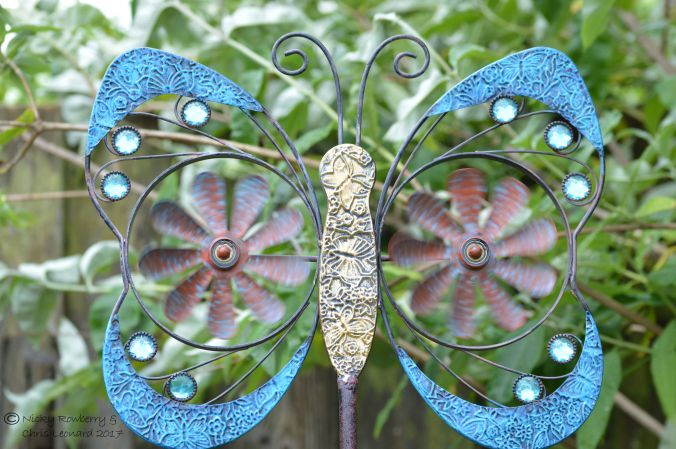 By mistake I then tried taking a photo of raindrops in a dish with the same shutter speed – the effect in this case was to make the water look sort of lumpy. (It reminded me of that shot in one of the Jurassic films where you see water in a cup shake as the T. rex approaches). 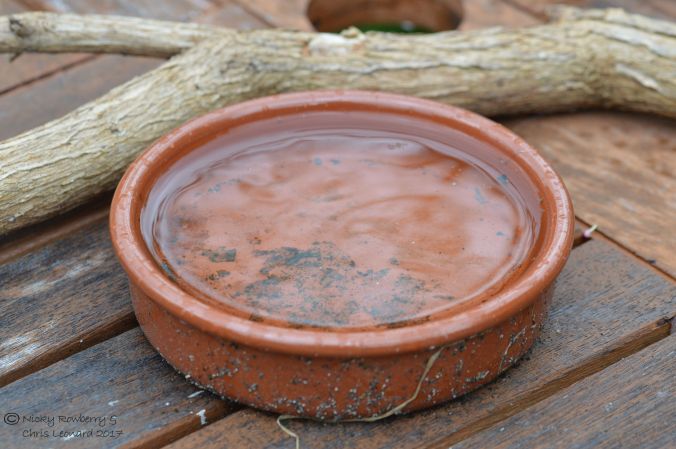 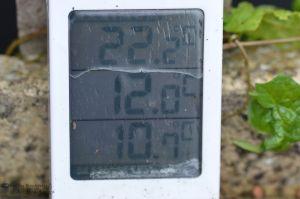 It intermittently chucked it down then drizzled for much of the morning. The thermometer said it was 12C, but it felt much colder so I retreated inside for a bit. I’m still working through the photos from the bioblitz, so it was a good excuse to sit on the sofa and carry on with them.

By the afternoon the sun had come out but it was still helluva windy. So much so that our recycling bin blew over – surprising since it was heavily weighted down with wine bottles, which were now rolling about the drive! (can’t fool the neighbours that I’m a teetotaller now)

The sky had gradually brightened during the day; by the afternoon the blanket of grey had been replaced by blue skies with picture perfect fluffy white clouds.

The buddleias in our garden were still thrashing about in wind though.

Bumblebees that had come out now the sun was shining were valiantly clinging to the red valerian. How something so small doesn’t just get battered to death in winds this strong amazes me.

The bird feeders were all bobbing about like mad, but it didn’t stop the sparrows who hung on for dear life, as if they were on a crazy roller coaster ride.

In the meantime from the relative calm of the sofa, I’ve now managed to ID (with a lot of help from people on Facebook, Twitter and iSpot) about 70 species from the bioblitz and loaded up 56 of them onto iRecord. Still loads of photos to go through, so final tally a way off yet. This little beauty of a hoverfly was one of the highlights so far – Eupeodes luniger.

The wind and rain may be frustrating in some ways, but like most things, you can’t appreciate the good without the bad.  It will make the next sunny calm June day all the more enjoyable.