Day 10 of 30 Days Wild and although it’s our wedding anniversary, I’ve spent most of the day down the allotment with my sister instead! We only got the allotment back in March, having e-mailed to be put on what I thought was an 18 month waiting list, only to get a plot 3 days later! Chris wasn’t too keen on the thought of all that weeding, so my sister and I are sharing the allotment instead. I have had to abandon the Too Lazy To Weed policy for the lottie, or all we’d actually grow would be weeds. Sis and I are sticking to our organic, peat free principles though, so ours is hopefully a wildlife friendly plot.

This is what some of the plot looked like when we started. Fairly overgrown with couch grass, bindweed and brambles, but it could have been a lot worse. Some of the empty plots are waist deep in weeds. 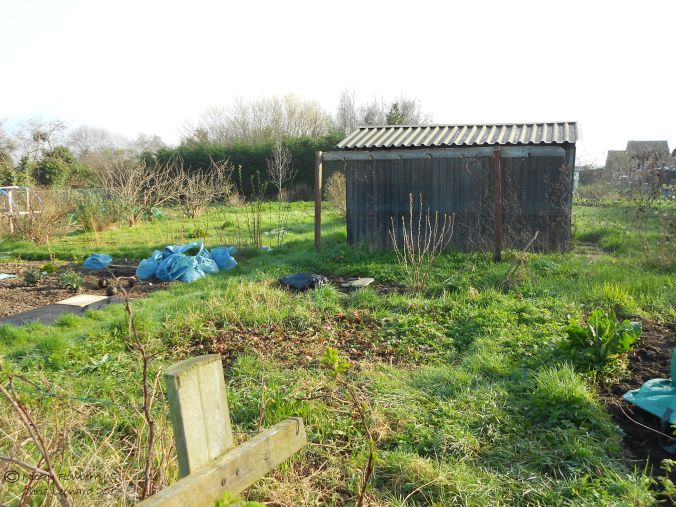 It is still very much a work in progress and probably always will be. No sooner have we cleared one patch, than the previous patch needs weeding again. And since we’re not using any weedkillers it is slow going, but worth it. Here’s the same bit a few weeks ago.

We inherited some apple trees, raspberries and currant bushes, all of which we’ve kept for the time being. The first major thing we did was put in a (very) small pond. Even one this size took some digging, which was a bit of a shock to my non-weeding/digging self. This is what the pond looked like just after it was put in. 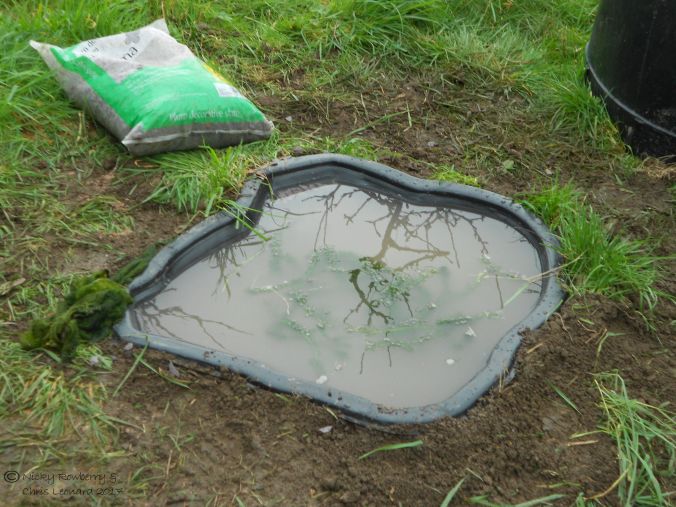 And this is what it looks like now. The pond plants have established a bit and the water has cleared. We used one of those barley straw logs that clear the water naturally, it would have worked even quicker if a cat hadn’t kept fishing it out! There had been a large water barrel on the plot which had pond snails in, so we transferred those in.

We’ve already seen adult frogs using it – this is one from this morning. 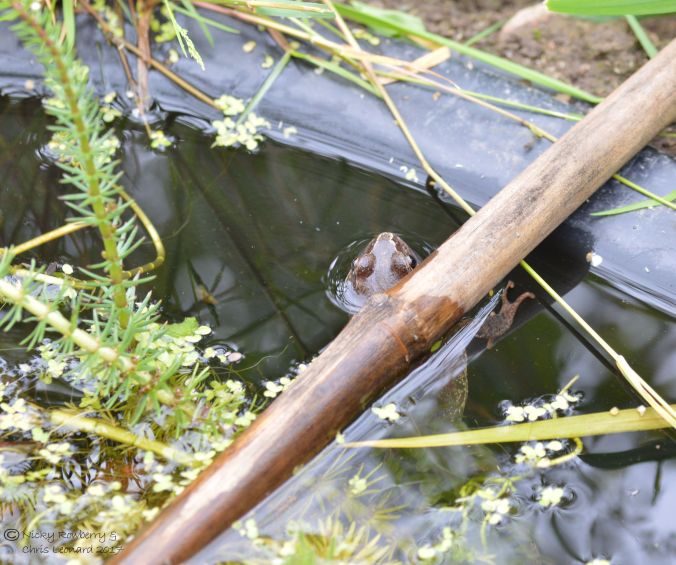 We’ve also got at least one common newt that’s moved in and seems to be pretty much a full time resident now. 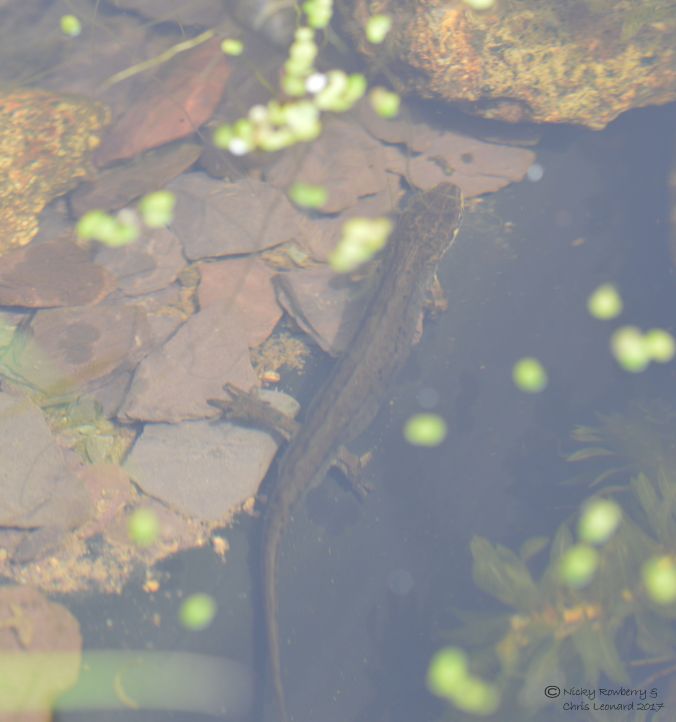 We’ve also had pond skaters and lots of midge larvae and a few weeks ago I got really excited when this red damselfly landed next to it.

We’re trying to be as environmentally friendly (and economic) as we can, so are using recycled stuff where possible. The cloches over our sweetcorn are old water bottles and we’ve turned other old bottles into plant pots that are hung on the fence.

This strange looking ring of fur may look like we’ve had some kind of ritual sacrifice, but is actually meant to keep the slugs off our courgettes. It consists of the hair clippings off my sister’s dog Pip – perhaps a bit odd, but we read it somewhere and thought we’d give it a go and it seems to be working.

We’re also trying out companion planting to distract the pests, so we’ve got marigolds amongst the runner beans, mint amongst the carrots and nasturtiums all over the place! 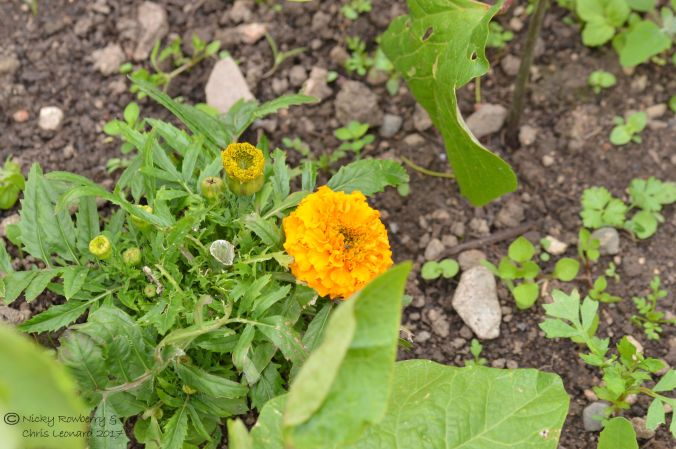 It must all be working because there are loads of bees, butterflies and hoverflies. We’ve put up a bird feeder too, so the sparrows are also doing well. We’ve even had moths – found this Small Magpie moth today trapped in the shed. A bit of chasing round with an old toilet roll and I caught him and released him – my good deed for today.

I do have to watch when I’m down the lottie that I don’t get totally distracted by the wildlife and forget to do the gardening. Today I spent an awful lot of time staking out a foxglove to try and get a photo of the bees going in and out. Unfortunately they’re so damn quick, this was the best I managed. 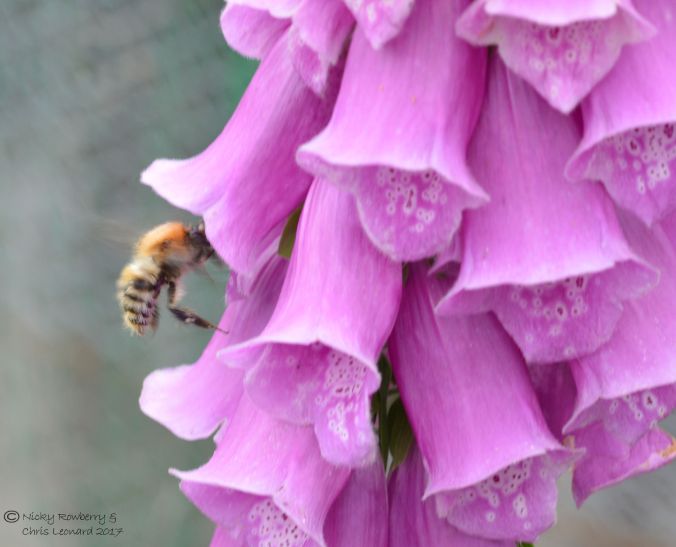 Finally no allotment would be complete without a resident robin. We have a pair that come down – I live in hope of getting them to trust me enough to take food from my hand, no luck yet.

By gardening organically we’ve accepted that some of our lettuce will get munched by slugs and some of the fruit will be eaten by birds, but there’s still more than enough for our two households.  This was today’s harvest – good to know that it is all pesticide and guilt free!

It is lovely and peaceful down the lottie and both my sister and I find it really relaxing. If I didn’t already know that getting in touch with wildlife and gardening organically was good for the soul, then taking on the allotment would have convinced me. Growing our own produce in a wildlife friendly plot – to me that epitomises the whole ethos of 30 Days Wild – and I couldn’t be happier!