It’s Day 27 of 30 Days Wild and we’re back on the butterfly hunt, this time in beautiful Trench Wood, Worcestershire. Not looking for anything new as such, just hoping for sightings of some old favourites and Trench Wood never disappoints. The place was absolutely heaving with butterflies and insects of all sorts.

Most notable today were the ringlets – they were everywhere, we must have seen hundreds. I don’t think we’ve ever seen so many, every step we took seemed to scatter more off the path. It was lovely to see, as I’d been starting to worry that we’d not seen so many this year. There were mating pairs too (in one case a trio, with an overly enthusiastic extra male!) doing their thing in the sunshine.

Meadow Browns were also common, although not nearly as abundant as the ringlets. 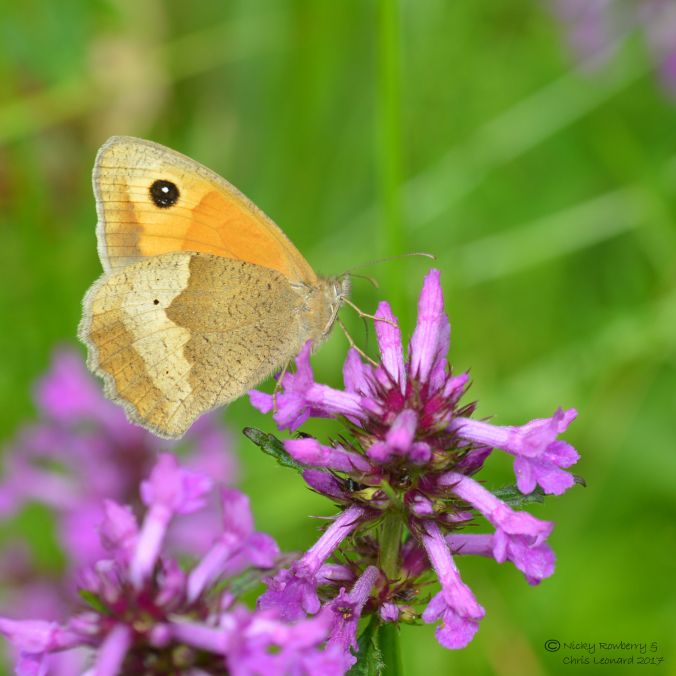 There were plenty of skippers, most being Large like this one with its hooked antennae.

But there were also a few Small Skippers – distinguished by their orange tipped, clubbed antennae. This one is a male with a diagonal scent brand across the wing (thank you to Mike Williams on Facebook for confirming this).

Once again the White Admirals proved elusive. There were quite a few present, but as usual they refused to settle long enough for a decent photo – here’s my best but still poor effort.

The one we really went looking for today was the Silver-washed Fritillary and in this at least we were fairly successful. Initial sightings were just glimpses as they bombed past us, but eventually we tracked down a few more obliging ones. Chris got the best photos, not just because he is a better photographer, but because he is taller than me and they tended to land quite high! 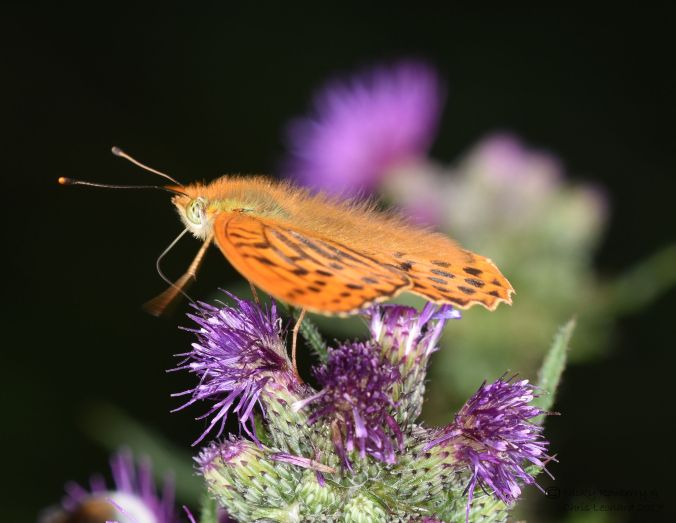 Surprise “bag” of the day was a Purple Hairstreak. Chris spotted it and got just the one photo before it was off. A great find and addition to this year’s tally.

A variety of moths were out and about too. Some tiny ones like this Nettle Tap, 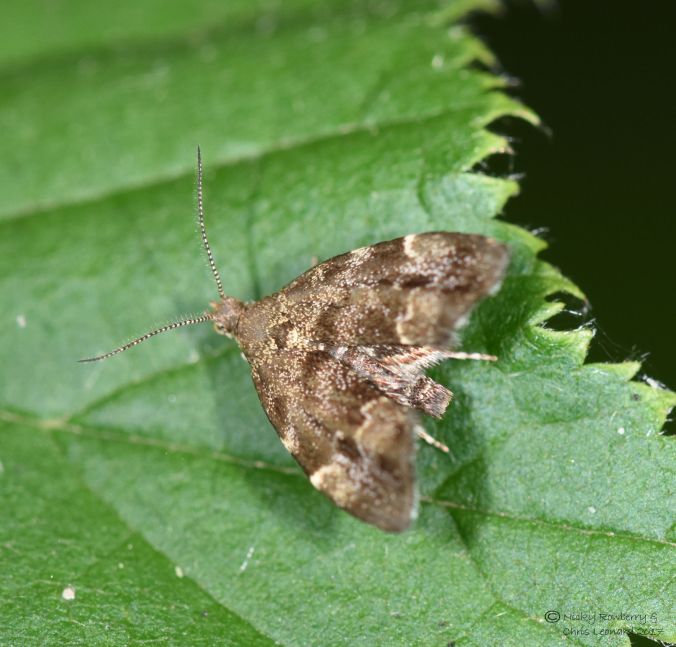 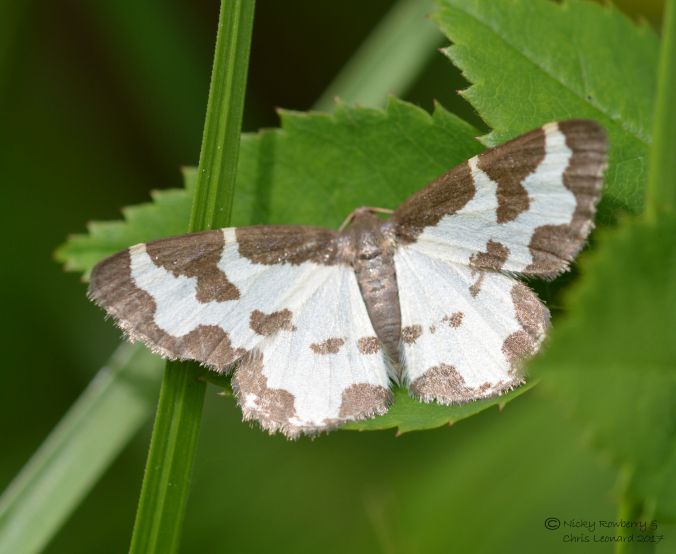 and others simply stunning like this Scarlet Tiger and Five Spot Burnet. 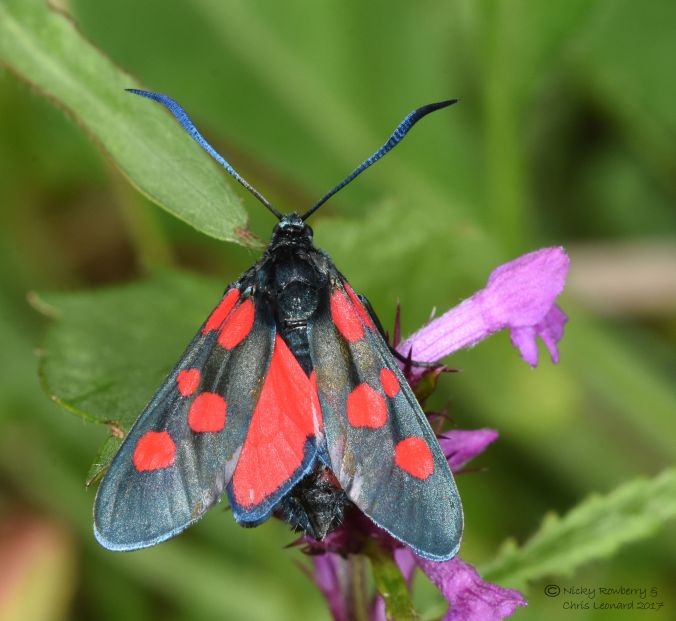 Damselflies, demoiselles and dragonflies were all fairly common around the pond. I think we saw both Beautiful and Banded demoiselles, azure and large red damselflies and these two splendid dragonflies. The top one is a female darter (either common or ruddy) and the blue one at the bottom is a male Emperor dragonfly.

There were of course bees and hoverflies everywhere, but there just wasn’t time to do those as well today – so many insects so little time! But there were a few other things that took our fancy. This Long-horned beetle was stunning, although we hadn’t noticed all the tiny beetles around it when we took the photo.

And finally I got a photo of a Scorpion Fly – I’ve been trying to get one of these for weeks now. Only trouble is, every single one we saw was a female, so none had the distinctive scorpion tail which only the males have. So the hunt goes on! 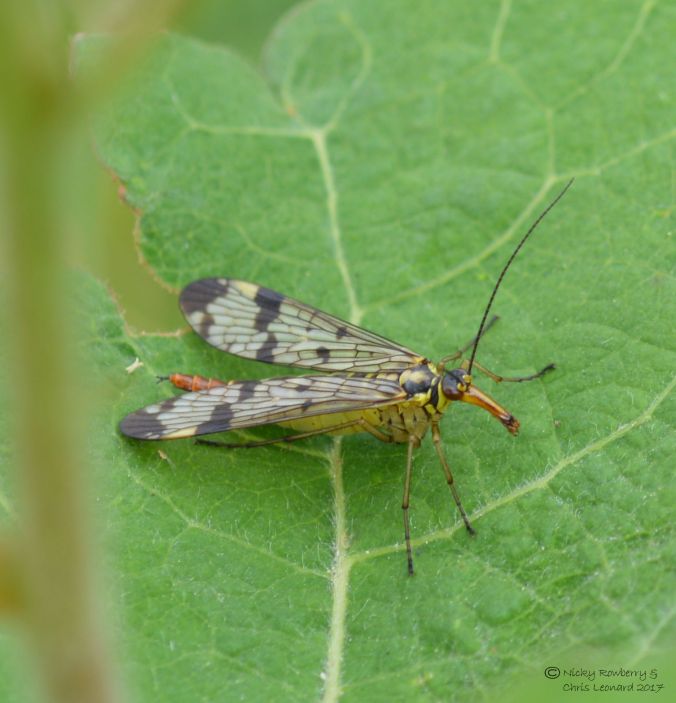 So all in all another fabulous day out and probably one of our most insect laden ones to date. Day 27 of 30 days wild and we’re still finding things that surprise and delight!