The penultimate blog from our trip to the Scilly Isles – this time a splendid day out on St Martin’s. We caught the 10:15 boat from St Mary’s which dropped us off at Higher Town. We then had most of the day to meander our way up St Martin’s to Lower Town where the boat picked us up for the return journey.

Rather than heading straight for Lower Town we decided to explore the eastern side of the island a bit, partly because this beach (Par Beach) looked so fantastic.

The beach was so tempting in fact that I did something I haven’t done for years – went for a swim in the sea! Admittedly it was a very short swim as it was damn cold, but my feet left the bottom and I was afloat, so it definitely counts as a swim! 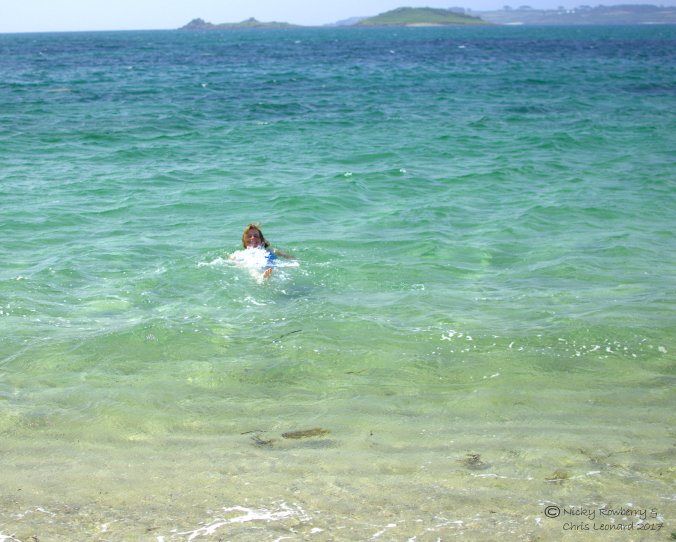 As with all the islands there were stunning views aplenty. I love the mixture of sandy beaches and rocky shores – something for everyone and everything as the variety must be great for wildlife.

For much of our walk we didn’t see anyone, just picturesque country lanes to saunter down at our own pace. 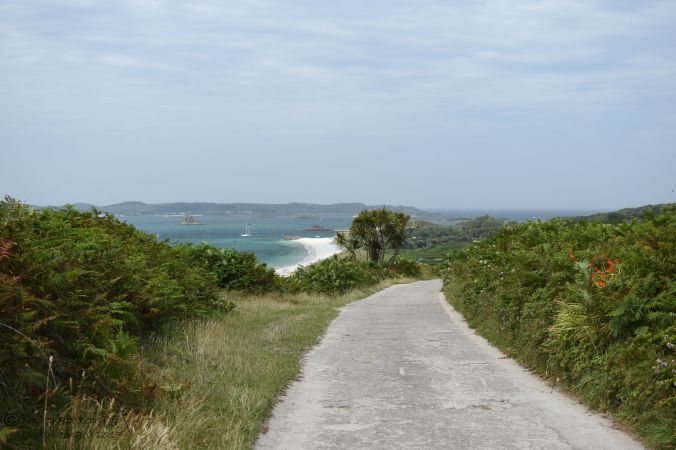 Almost every point on the island gives wonderful vistas of other islands. I tried doing one of my shaky video clips to try and convey it – not sure it does the view justice though.

St Martin’s has an interesting Daymark at its highest point that can be seen from the mainland. Although it looks quite modern it was apparently erected in 1683 (thanks to Wikipedia for that fact of the day!) 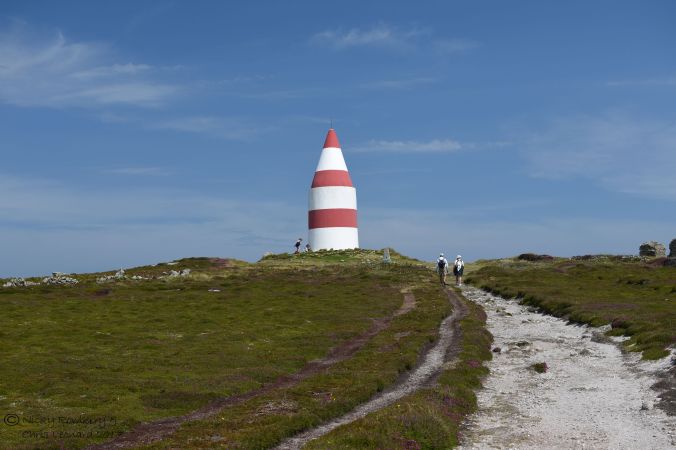 One of the highlights for us wherever we go is always finding a good pub and in the Seven Stones Inn we found a cracker! A cold beer, a huge sandwich and friendly staff – what more could you want?

Actually you could want  a stunning view too – and I don’t think we’ve ever had a better pub view than this one looking out to sea.!

And as if all that wasn’t perfect enough, an insect landed on our table that I’ve been wanting to photograph for ages – a ruby-tailed wasp. These wasps are tiny and are almost too beautiful to be real. 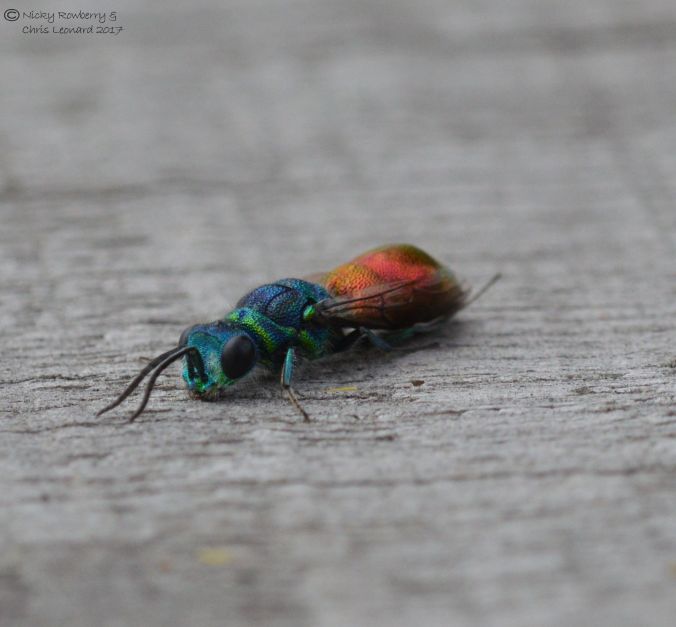 As usual I couldn’t resist taking photos of Small Copper butterflies – this time a pair that landed right in front of me on the path. 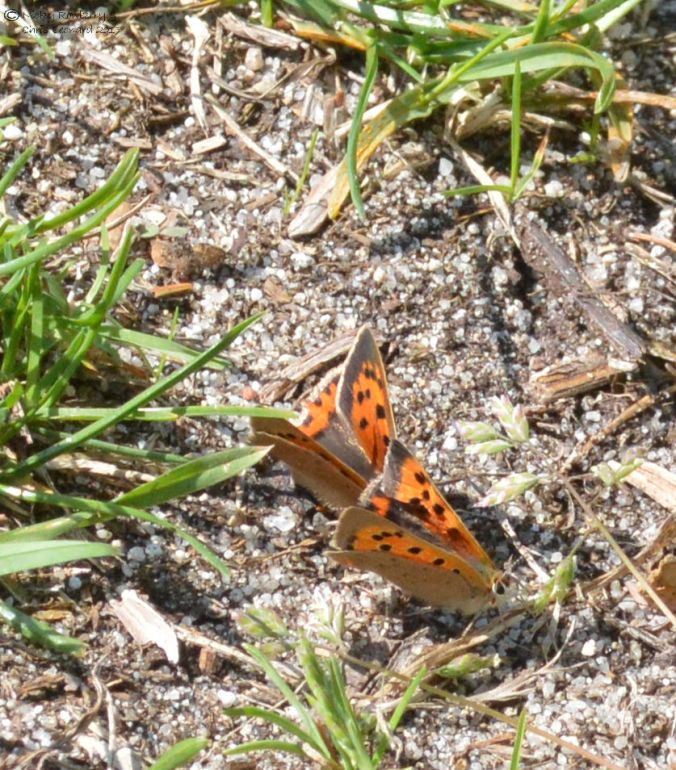 It was nice also though to get a bit of a moth fix in the form of a Silver Y. This is an immigrant moth, possibly arriving in Scilly on the winds from the continent. 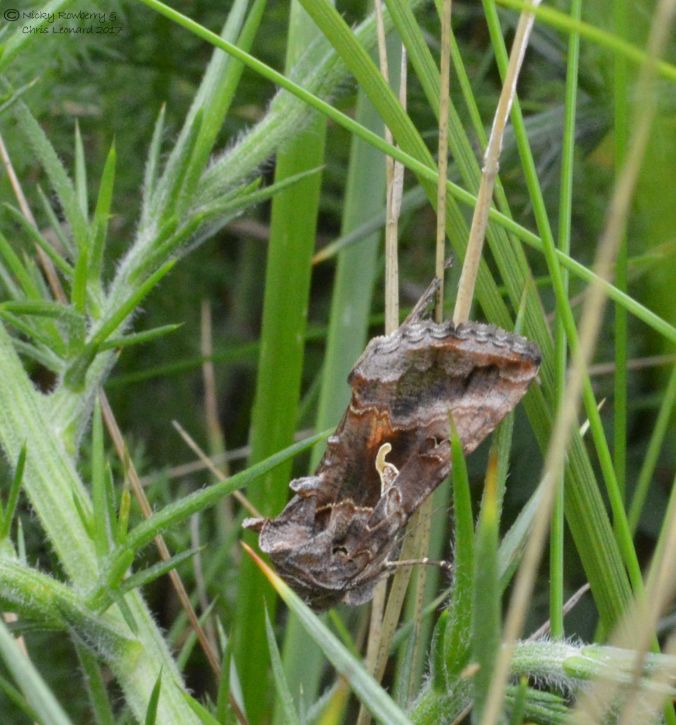 Although there were of course plenty of seabirds on St Martin, it was nice to take some pics of more familiar garden birds. The flock of goldfinches we saw remained out of camera range, but a couple of Great Tits came close enough for a quick pic.

At one point there was a bit of a commotion amongst the small birds and they seemed to be trying to drive off a larger one. We thought at first it must have been some kind of bird of prey, but it was hard to tell from a distance. So it was a bit of a surprise when we zoomed in on the photos later to discover it was a cuckoo! The photos aren’t great, because it was quite a long way off, but they are still the best cuckoo photos we’ve ever taken! I thought from the first photo that there was perhaps something wrong with its wings as they seemed at a strange angle to the rest of the body, but apparently they do perch slightly oddly like this. There was certainly nothing wrong with its wings when it took off. 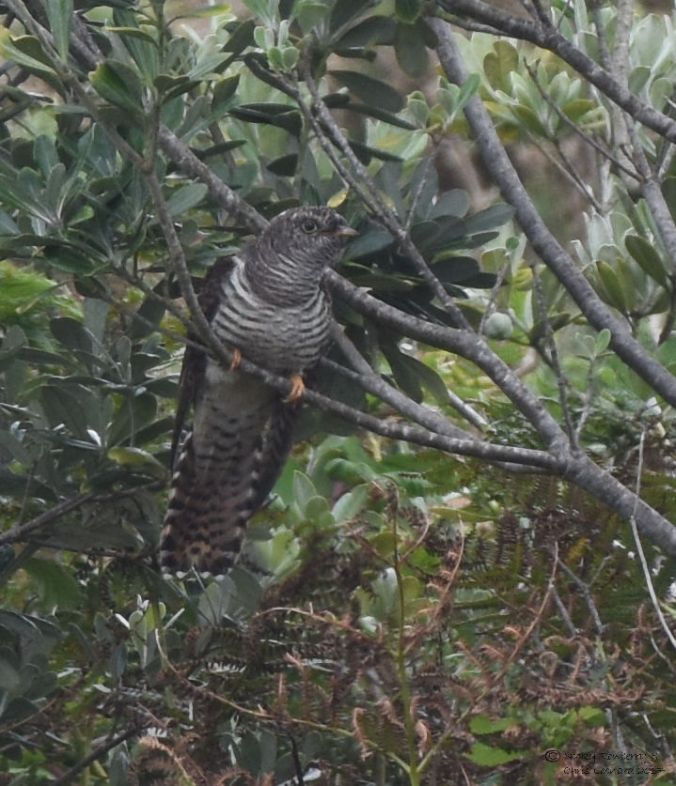 So that was St Martin’s – a really beautiful island that was possibly our favourite out of all of them. With a surprise cuckoo and ruby-tailed wasp after a perfect pub lunch, we headed back to St Mary’s very happy indeed.