Our first full day on the Isle of Wight coincided with the first day of 30 Days Wild – the Wildlife Trusts’ annual event to get people to engage with nature.  Perfect day then to go looking for our next two species of butterfly – the Glanville Fritillary and the Adonis Blue. Unfortunately the weather had other ideas and a thick blanket of fog seemed to have covered most of the island. No self respecting butterfly was going to fly in that, so our chances of seeing them were virtually nil. We did make a short half-hearted attempt and had a bit of a wander around the chalky slopes on the southern coast. Fortunately we like all sorts of invertebrates besides butterflies and many of these are fog tolerant.

Snails of course don’t mind a bit of damp weather and we found two new (to us) species in the hedgerows. This beautifully coiled one is a Kentish Snail (Monacha cantiana). 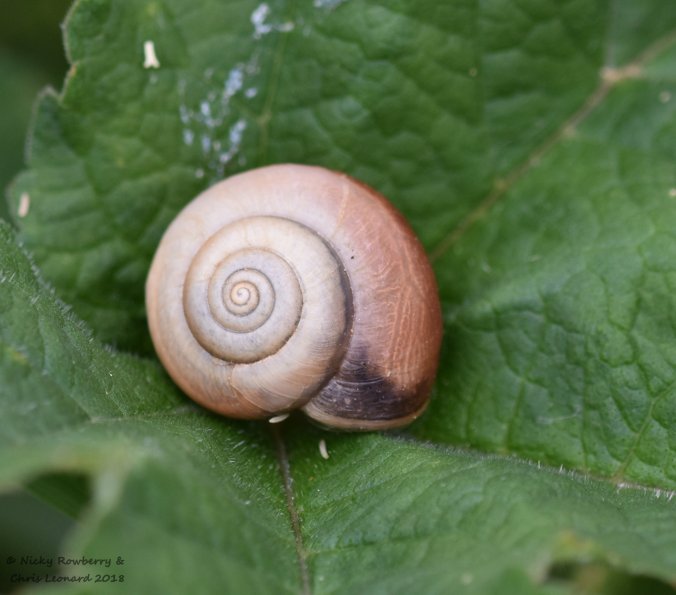 This tiny pointy snail is in fact called a Pointed Snail (Cochlicella sp.). It was only about a centimetre long, but still managed to have at least 8 whorls on its shell.

The other group of invertebrates that braved the fog in reasonable numbers were moth caterpillars. We saw several species, but these two were particularly striking. We’ve never seen them before either in caterpillar form, nor as adult moths. The top one is the caterpillar of the Lackey Moth and the bottom one of a Dingy Flat-Body Moth (thank you to the good people of iSpot for identifying the second one for me). 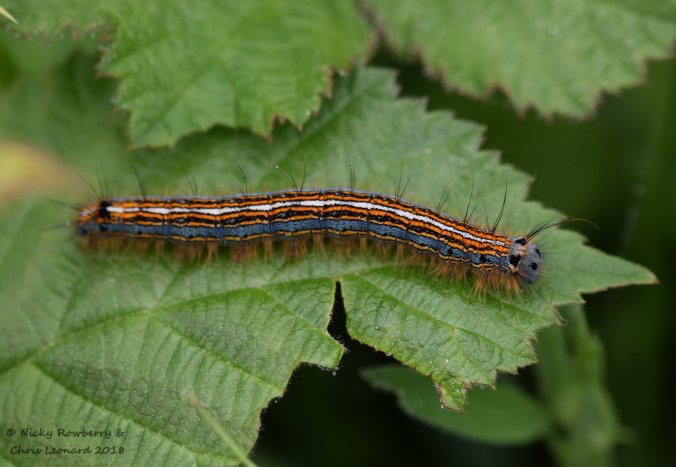 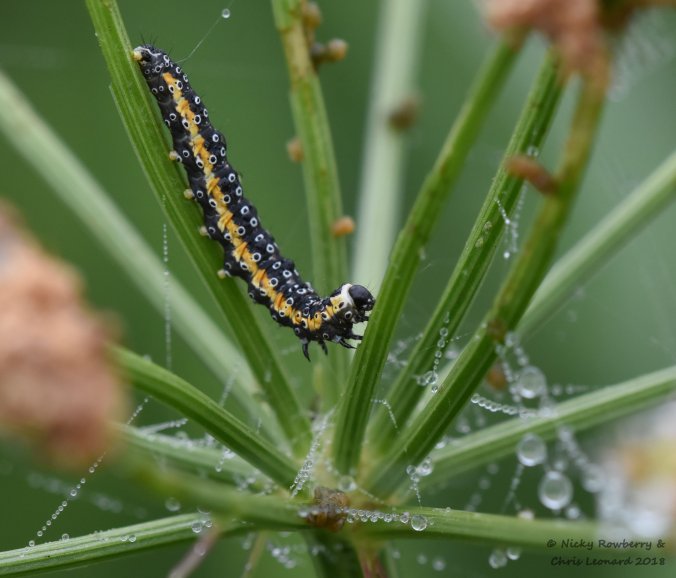 The other notable invertebrate was a cricket – there were large numbers of these Dark Bush Crickets (Pholidoptera griseoaptera) in the undergrowth. We only saw immature stages such as this nymph. 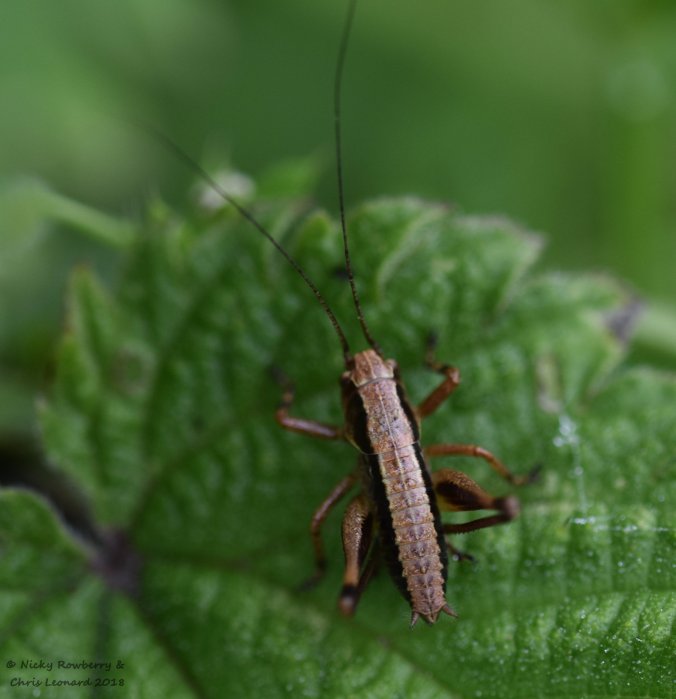 After an hour of enjoyable but butterfly-less searching, we went to Plan B. Isle of Wight is also known for its thriving population of Red Squirrels. Thankfully the grey squirrels haven’t made it across the water yet, so for the time being the reds have free rein over the island. So we headed inland to Borthwood Copse, a small woodland managed to support the red squirrels. The first interesting animal we spotted when we got to the wood, was another insect. This female Scarce Chaser dragonfly (Libellula fulva) is, as its name suggests, fairly scarce, so it was a really nice find. With its yellow veining and dark tips to the wings, it was clearly different to any dragonfly we’d seen before.

The wood was full of birds, all singing their hearts out (or all shouting warnings that we were intruding possibly). We could hear, if not see, lots of species, but the only one we really managed to photograph was this male Great Spotted Woodpecker.

After a lot of dizzying staring up into trees, we eventually spotted our first red squirrel. I think we had both fondly imagined that the squirrels would come down and somehow just sit waiting to be photographed. Needless to say, they did no such thing and remained steadfastly high up in the branches. Over the course of the next hour we spotted a few (or possibly the same one taunting us over and over) and although they were a delight to watch, they never came close enough for any really good photos. But we did eventually get some recognisable red squirrel photos, so here are our best efforts. We watched this one for a while carrying a bundle of nesting material, jumping from branch to branch. 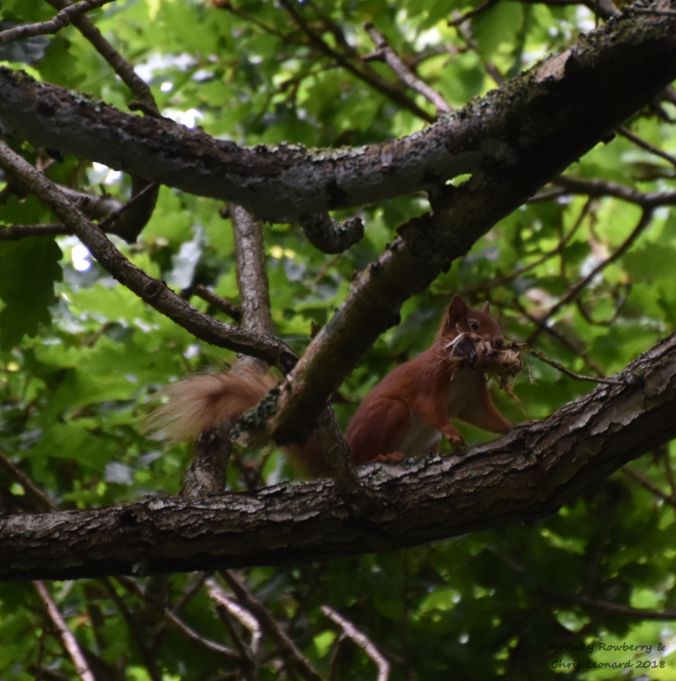 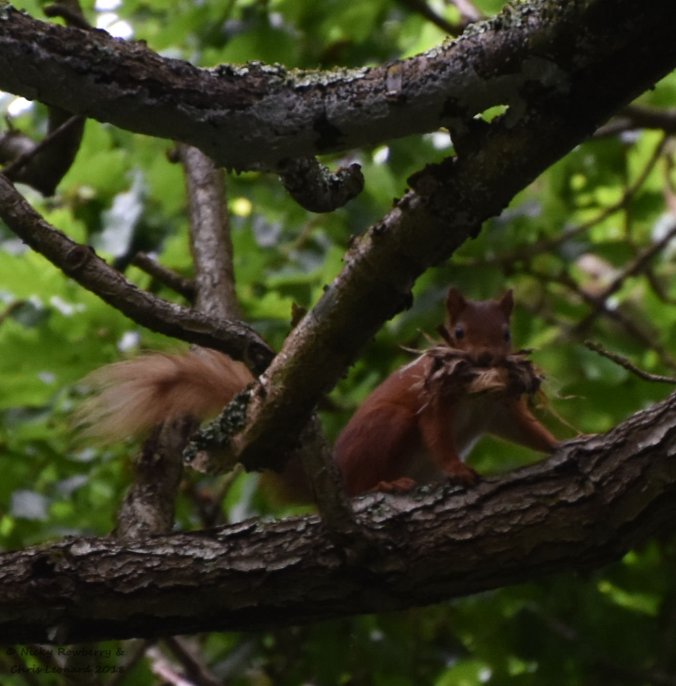 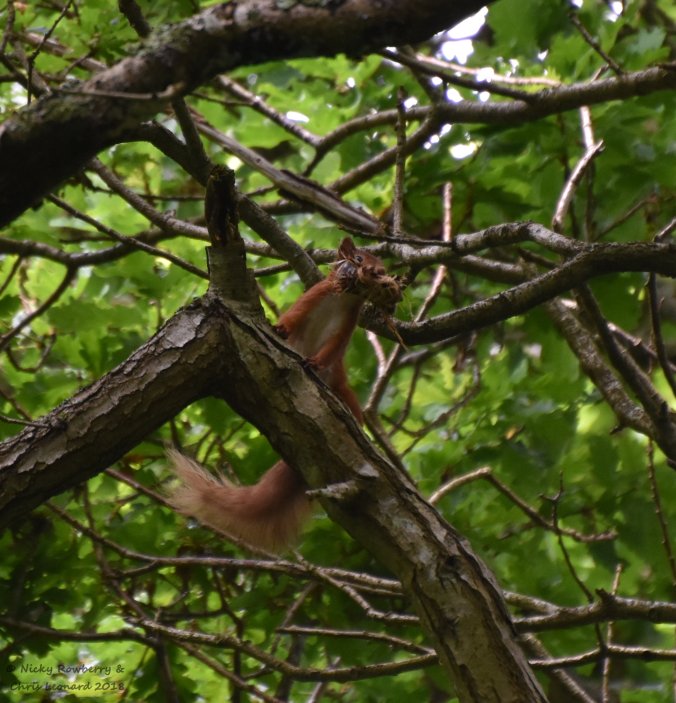 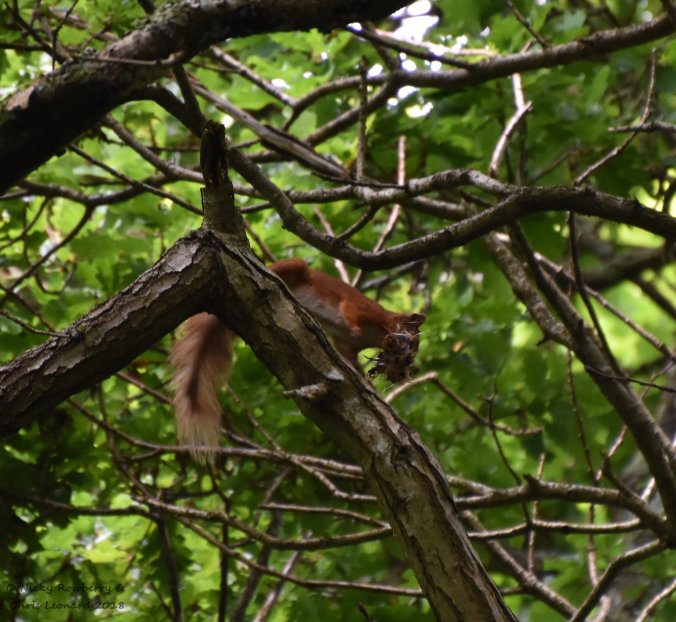 We followed it by eye until it disappeared with its bundle of nesting material into what looked like a denser patch of leaves. It stayed in there for ages, so we wondered whether this might have been a nest or drey? You can just about make out the denser patch in the photo below. 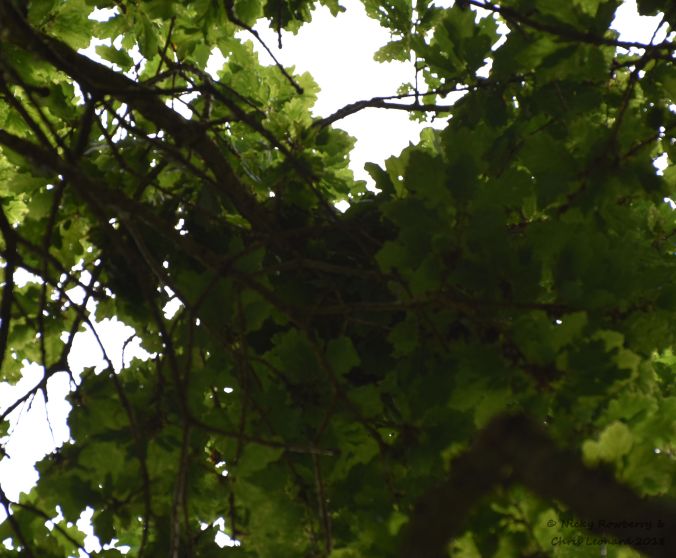 When it eventually emerged it no longer had the nesting material, but decided to sit nearby watching us below. I know the next picture is really dark, but you can see the squirrel staring directly at us.

We had a few more sightings after this. In some they were again carrying nesting material, although we lost track of them in the branches so couldn’t see if they took them back to the same place.

The final photo I know is really rubbish, but I just love the way it looks like he’s just dangling there, when obviously we just caught him mid-jump.

So Plan B worked out pretty well in the end. The fog may have stopped us seeing butterflies that day (don’t worry we got there in the end – see next blog post), but there was plenty of other wildlife to enjoy. That’s one of the things about wildlife watching I love, you are never really disappointed, as there is almost always something amazing to see if you look.