Yesterday we had the perfect start to a Sunday – a Moth Breakfast, followed by a brunchtime stroll for butterflies. Thankfully the Moth Breakfast was not as insectivorous as it sounds – we simply looked at moths while actually eating bacon butties!  The event was organised by the West Midlands Branch of Butterfly Conservation and took place as one of our favourite places – Monkwood. The moth traps had been put out the night before and all we had to do was turn up to see what had been caught. The great thing about an event like this is that we got to see moth species that we just don’t get in our garden. So amongst many others we saw woodland moths such as – Blotched Emerald, Large Emerald, Peach Blossom and Rosy Footman – all species that I have been dying to see for ages. So here they are: 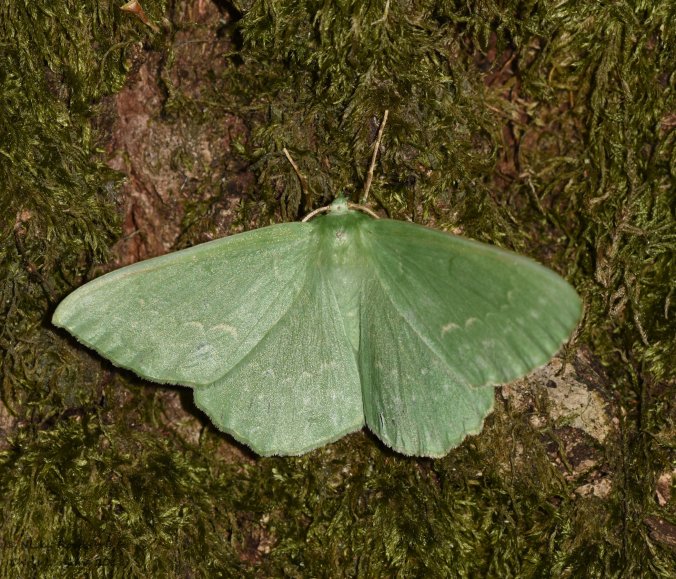 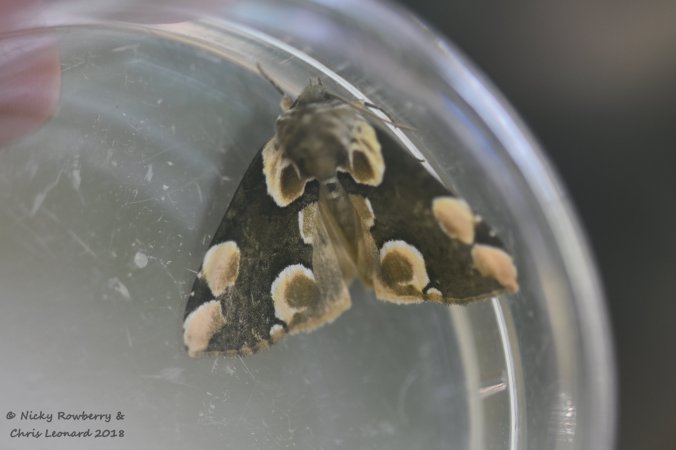 Another bonus of going to this kind of event, is getting to meet a load of like minded people. It’s not often I get the chance to discuss with enthusiasm the differences between a blotched and a large emerald, or a Fan Foot versus a Small Fan Foot. I’m more used to amused tolerance rather than eager enthusiasm when waxing lyrical about the beauty of moths! So it was lovely to chat to some new people.

After we’d had our fill of moths (and bacon butties) we headed off for a mid morning walk around the wood. Monkwood is run by Butterfly Conservation and as such is brimming with butterflies. The very first time we went to Monkwood we were amazed to see White Admirals flitting around as we got out of the car. This time it was Purple Hairstreaks – there were at least 3 or 4 (and possibly many more) fluttering around the tops of the trees around the carpark. Sadly none came down low enough to get a decent photo, so this was the best distant shot I managed. 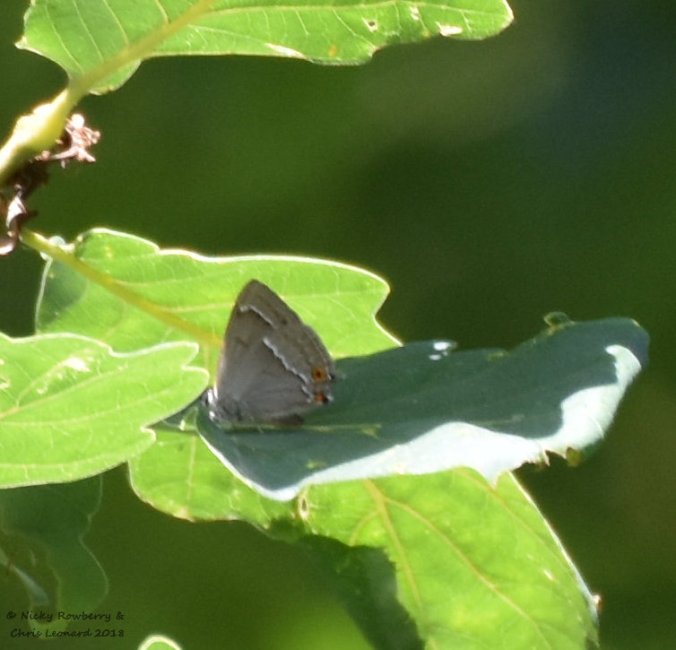 The White Admirals though were much more obliging and appeared along the path almost as soon as we left the carpark. The uppersides of their wings might not be as showy as their Red Admiral cousins, but the undersides more than make up for it. They are fast flying butterflies, but thankfully a few settled long enough to get some pics.

We also saw our first Meadow Browns and Ringlets – common enough butterflies, but still always nice to see your first ones for the year. 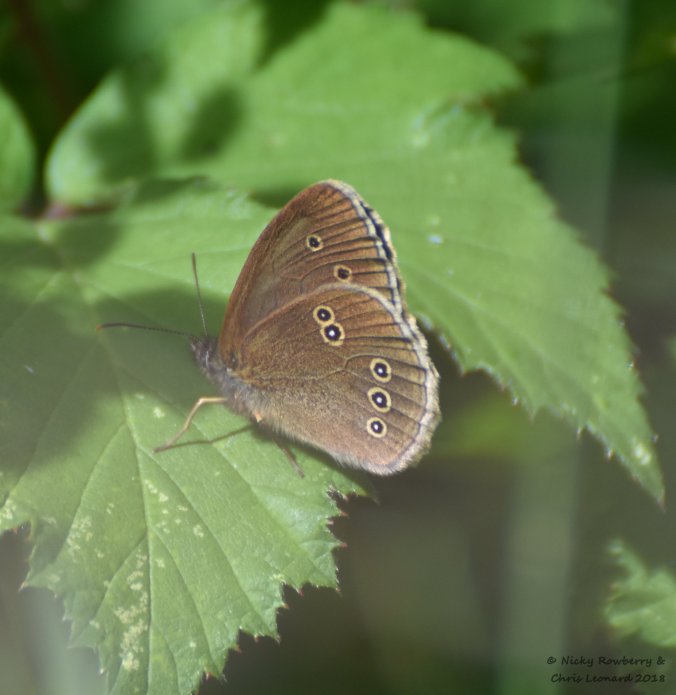 A couple of Silver Washed Fritillaries bombed passed us but didn’t hang around long enough to get their photos taken. Same story with a Comma and a White of some description which didn’t even slow down enough for me to tell if it was Large or Green-Veined.

By far the most common butterfly we saw was the Large Skipper. As always I love these cheery little orange butterflies, not least because they pose so nicely for photos.

Butterfly highlight of the morning though has to be the Wood White. We have seen Wood Whites once before (at Haugh Wood in Herefordshire), but it was nice to see these delightful little butterflies again. Their renewed presence in Monkwood is a relatively new thing and is all down to the hard work that Butterfly Conservation have put in. We were at the tail-end of the Wood White season, so there were only a couple around, but there had apparently been plenty of them earlier in the month. A good news story! 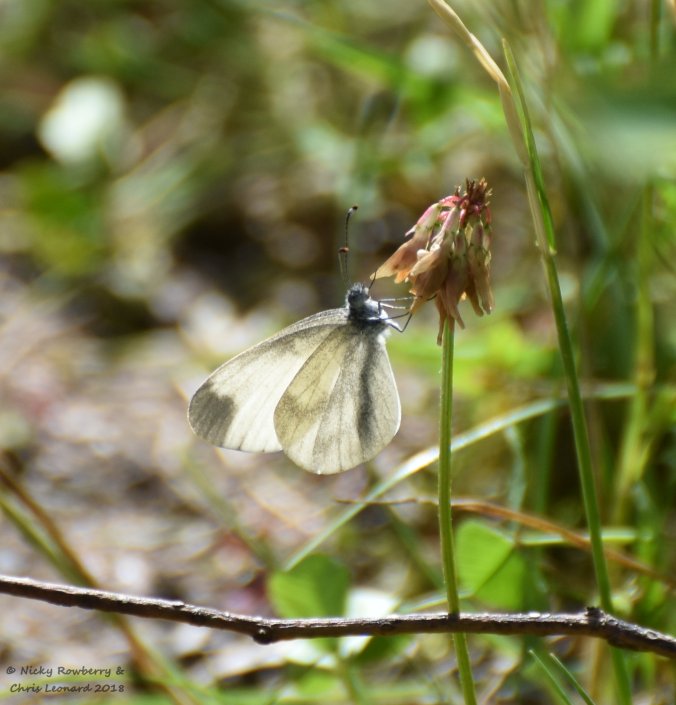 The Wood Whites are such ethereal little butterflies. This last photo in particular reminds me of how I imagined fairies to be when I was little – long before I’d even heard of Wood Whites. 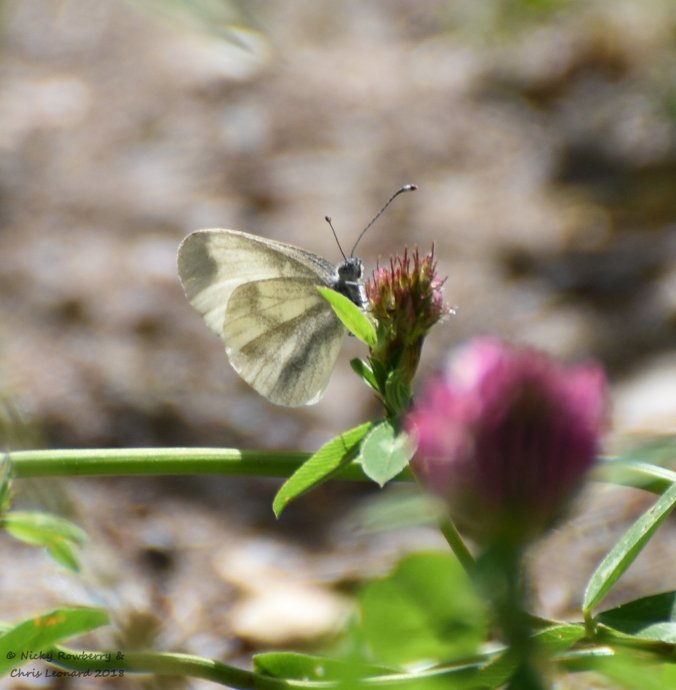 Monkwood has plenty of other insect life to offer too. There are a few small ponds, so dragonflies and damselflies were abundant in those areas. We are used to seeing the red and various blue damselflies, but this Emerald one was a new one for us I think.

We saw quite a few beetles, including several of this splendid Black & Yellow Longhorn Beetle. 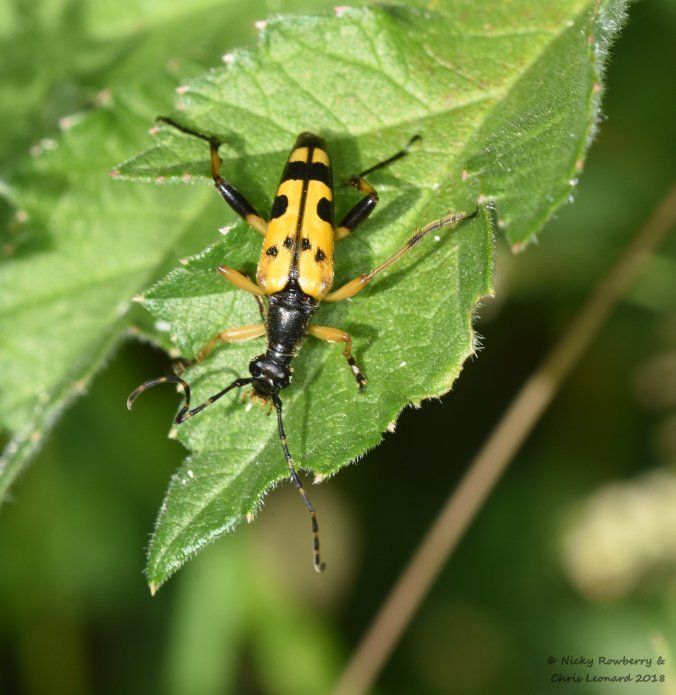 Chris managed to find our first Speckled Bush Cricket of the year,

whilst I got a male Scorpion Fly showing off his strange scorpion-like rear end and his even stranger proboscis.

Final interest for the day was this pair of mating Dock Bugs, who for some reason had chosen a spot of bird poo for the site of their nuptials, all watched it seems by a curious fly.

So many thanks to Butterfly Conservation West Midlands for getting us out of bed on a Sunday for a most enjoyable morning.