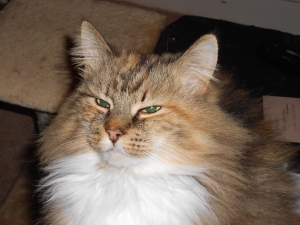 Every January I tend to do a review of our previous wildlife year, so here goes. 2018 was a mixed year for us to say the least, with some difficult family issues and the loss of our beautiful Norwegian Forest Cat – Puddle. It’s been 9 months and I miss her every day. Family problems have meant we haven’t managed to get out and about as much as normal and consequently the blog posts have been a bit thin on the ground. Hopefully 2019 will bring happier times. I can’t think of any better therapy than getting out and enjoying the wildlife both in our garden and beyond, so hopefully 2019 will bring more of that. 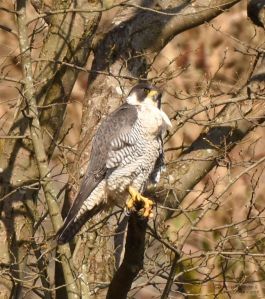 Having said all that, there were a lot of positives too. 2018 started well with some birdy highlights. We saw our first ever Hawfinches at Bewdley and also a pair of Peregrine falcons up on the Malverns less than a mile from our house. Hopefully the peregrines will return this year and we’ll get some better photos. We “rented a nest” through Worcestershire Wildlife Trusts scheme at Knapp & Papermill and “our” nest box was found to have blue tits with 8 chicks hatched in the spring. 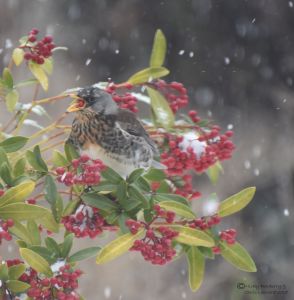 The Beast from the East weather front blew in during March, bringing the most snow I can remember for a good few years. It may have been cold but we had the bonus of fieldfares and redwings in the garden, which was great. We also had another day in a photography hide, this time overlooking a reed bed full of buntings and warblers and the occasional lightning flash of a kingfisher.

There was delight in spring, when the pond which we’d put in at the allotment the previous year had its first clumps of frog spawn. With the help of our new GoPro camera we watched the spawn turn to tadpoles and then to mini frogs. Hopefully at least some of these will have survived and will return to their ancestral pond to mate this year.

At the end of May we headed to the Isle of Wight for a long weekend. Our main aim (other than to sample the local hospitality) was to see 2 more species of butterfly – the Glanville Fritillary and the Adonis Blue. Thankfully despite an unpromising foggy start, we managed both of these, plus a few precious glimpses of some red squirrels.  During the year we also managed to see a Large Heath and some Clouded Yellow butterflies, taking our tally of British butterflies to 47.

The trail camera was of course out almost full time during the year and with it, we were really excited to get our first glimpse of a fox in the garden. Hedgehogs of course featured heavily, with both feeding the wild ones and fostering a few rehabilitating ones. We were really worried in the summer when our neighbours announced they were replacing the fence. Thankfully they are lovely neighbours and readily agreed to have 3 gaps put in their new fence specifically for hedgehogs to come and go. The hedgehogs soon found the new gaps and as can be seen in the video clip below have been making good use of them.

As well as trying to bag as many butterfly species as possible, the moth trap has also been put to good use; one of the few things I’ve managed to keep going throughout the year for the Garden Moth Scheme. This year alone we have recorded 220 moth species in the garden. Overall since I began moth trapping I’ve found 331 species – not bad for a fairly regular (albeit scruffy) suburban garden. This year’s moth haul has included a couple of beauties I’ve been dying to find for a long time – a Rosy Footman and a Chinese Character.

As well as the regular moth trapping, we had a go with pheromone lures, managing to attract Currant Clearwings to the garden and the fabulous Emperor Moth on Hartlebury Common.

And that’s pretty much a summary of the year – very quiet in the latter half, but some really nice wildlife moments in the first half.

So of last year’s New Year’s Resolutions, I think the only one we managed to fully achieve was to see 3 new butterfly species – we actually managed 4! Of the remainder:

So that brings me to 2019’s resolutions, hopefully I’ll have a bit more success with these ones than last year.