Nearly at the end of October and we’re coming to the end of “moth season”. Moth numbers are dwindling as the nights get colder, so it seems a good time to review what I’ve had in the trap. It’s been an interesting year for moths, but they aren’t the only animals the trap attracts. So I thought I’d share some of the Moth Trap Intruders (a name shamelessly copied from a very interesting Facebook group I’m a member of) I’ve had over the last few years.

Sadly I can’t compete with a blogger who had the most amazing moth trap intruder ever – a puffin! Have a read of http://www.surfbirds.com/community-blogs/amigo/2017/06/17/puffin-in-the-moth-trap/ if you don’t believe me.

But puffins aside, there is still quite a variety of animals that find their way into our moth trap. The biggest and probably most impressive non-moth I get in the trap is the May Bug or Cockchafer (Melolontha melolontha). It is a huge beetle and I remember being absolutely amazed the first time I found one in the trap. Chris wasn’t quite so impressed when I woke him about 5am waving a large beetle in his face!

The May Bug isn’t the only large beetle we get though. These jazzily coloured Sexton Beetles pop up occasionally too.  Not as big as the May Bugs, but the Wildlife Trusts describe these as the undertakers of the animal world, burying dead animals. Slightly gruesome to think that perhaps the reason these appear in the traps is because there is a dead mouse or bird nearby that they’ve been burying.

Smaller still are these, which I thought initially were water beetles. Thanks to a kind reader I now know they are bugs not beetles, a type of water boatman. They must have flown in from a nearby pond. Some summer nights they can appear in large numbers in the trap, trying to swim about ineffectually at the bottom. Caught and released into some water they whirl around surprisingly quickly.

Caddisflies are common intruders. There appears to be a variety of species, but I’ve yet to get to grips with identifying most of them. Some of them have quite strikingly patterned wings and look like they should be easy to identify, but I suspect they are more difficult than they look.

I did manage to identify one tiny black & white caddisfly, mainly because I initially thought it was a micro moth. It was so small, I potted it up to take a photo so that I could zoom in on it. Turned out not only to be a caddisfly, but to be a fairly rare species –  Leptocerus interruptus. It is associated with the Severn catchment which I suppose we just about come under here in Malvern.

Bees and especially wasps often end up in the moth trap and fly off in the morning when they have warmed up. In the summer months I sometimes put the whole trap inside a mosquito net tent to empty it. When there are large numbers of moths, they will sometimes escape quicker than I can count them and the net tent catches them before they disappear. I was a bit surprised one morning to find myself sitting in this tent with a large and slightly angry hornet! I have nothing against hornets, but being stuck in a small tent with one was slightly alarming even for me. The hornet found the entrance to the tent only slightly slower than I did (I rarely move that fast first thing in the morning), so I only got this one poor photo of it. 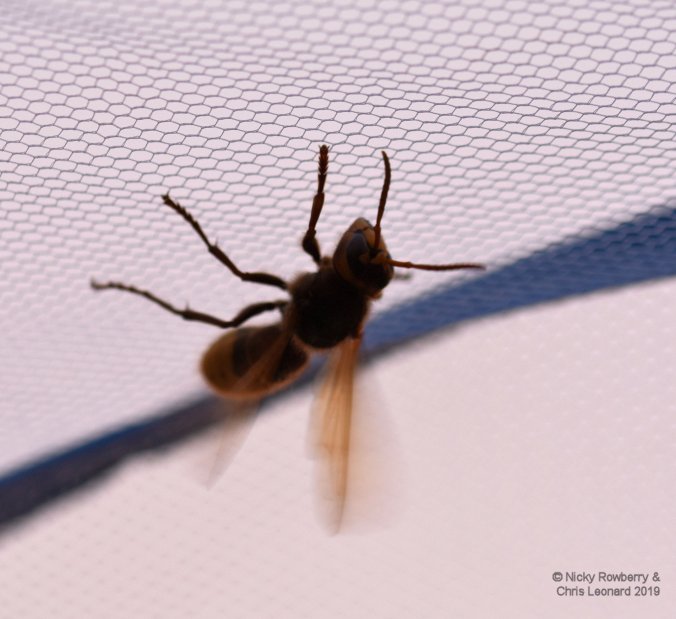 Another occasional intruder is the mayfly. These alien-like insects can hatch in their thousands if not millions and swarm over rivers. A lot of fishermen’s flies are designed to look like mayflies as they are a favourite food of fish like trout.

These beautiful green Lacewings are also occasionally attracted to the light. They are so transparent and delicate the camera struggles to focus on them and I’ve yet to take a photo that does them justice.

Various leafhoppers get attracted to the light. My favourite is the weird and wonderful Eared Leafhopper (Ledra aurita). Again difficult to photograph, these strange little insects are so well camouflaged I’ve never seen one in the wild, only when they come to the moth trap. 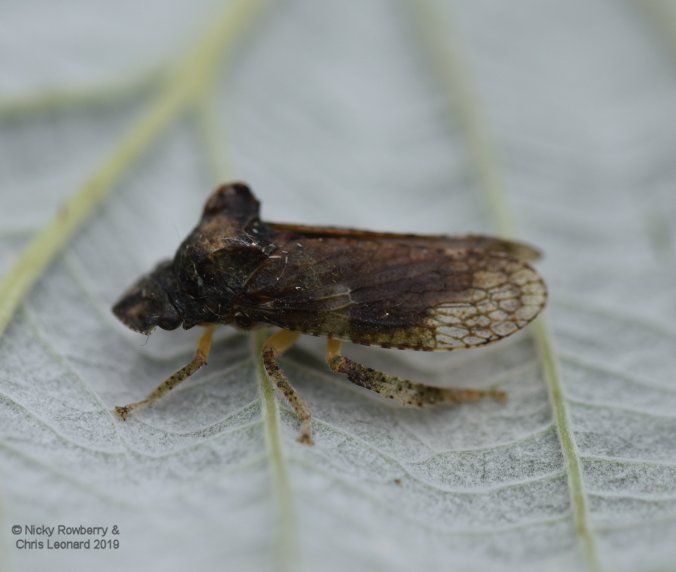 Various other invertebrates have also ended up in the moth trap over the years. Ladybirds, snails, slugs, spiders, flies, mosquitos and shield bugs have all appeared, but I’ve not thought to photograph them – something to keep in mind next summer.

Invertebrates may be attracted to the light but if I don’t get up early enough in the morning, birds are then attracted to the invertebrates. I may not have a puffin, but plenty of other birds have cottoned on to the benefits of moth trapping. The blackbirds have learned to check the grass around the trap in the morning for stray moths. The robins take their entomology to a whole other level though. If I turn my back they are on the trap itself and on one occasion I felt the robin literally land on my back itself. Whether I had a moth on my back or he was just trying to get a better view of the trap, I don’t know.  Once I’ve emptied the trap I put all the moths in a quiet corner of the garden near the house where they can rest up on the egg boxes until the next night. The birds of course have learned to watch where I put the eggs boxes. I have had to become increasingly devious to prevent them helping themselves to a moth buffet. The photo below is from a day where I obviously wasn’t careful enough!