Way back at the end of last August I blogged about Lonesome George, the Eyed Hawk-moth caterpillar I had been raising. You can read the original blog post here:  https://toolazytoweed.uk/2019/08/29/lonesome-george/

On 30th June 2019 I caught a female Eyed Hawk-moth in my moth trap. I put her briefly in a pot so I could take some photographs of her. Here she is in all her splendour.

While in captivity she laid 2 eggs. Hopefully she laid many more eggs too, once she was released, as she looked full to bursting. 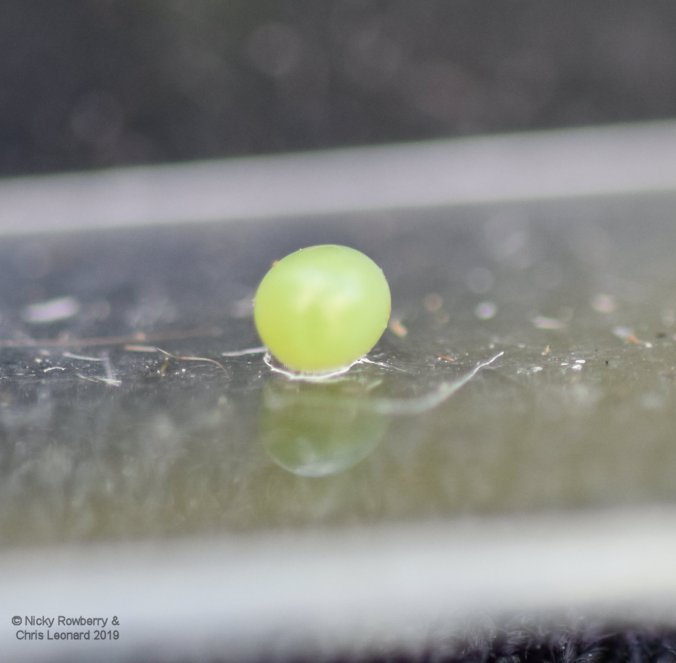 I decided to try and rear the caterpillars if I could. They both hatched into tiny caterpillars, but sadly only one lasted beyond the first day – Lonesome George was the survivor. George was lovingly tended and fed fresh apple leaves every day and soon grew into a handsome fellow about 5cm long with a voracious appetite.

Towards the end of August 2019 he pupated and he’s been safely kept in a large tub with soil and leaves ever since. I checked on him every couple of days to make sure nothing untoward had happened to him.

At the  beginning of May I started seeing reports on social media of Eyed Hawk-moths being out and about, so I stepped up my surveillance of George. For the last few days I had been checking him almost hourly for any signs of activity. What I’d hoped to see was him (or her) emerging from the chrysalis and to watch the wings expand into full blown moth! Of course George had other ideas and chose to emerge during the night.  I got up yesterday morning and checked on him about 7am to find the chrysalis cracked open – I had a split second panic that something had somehow got into the tub and got him.

I love that in the bit of the chrysalis shell that has broken off, you can see the imprint of his antennae – it’s almost like a death mask! Anyway I checked the rest of the tub and there was George sitting proud and fully formed. Here’s the first hasty photo I took of him in case he flew off.

Fortunately he was fairly dopey, perhaps after the exertions of emerging and of course it was daylight. I say he, I can’t be totally sure but I think George is probably a George not a Georgina. I read that the males tend to be slightly smaller than the females and that they sit with their abdomens curled up a bit – both of which seemed to apply to George.

Having reared him for a year, I was loathe to just release him during the day and have him snaffled by a hungry sparrow. So I kept him in his tub in the shade for the day until it started to get dark and I gave him a stick to perch on to make him feel more comfortable. I did of course take the opportunity to take lots (and I mean lots) of photos of him. Here are just a few. 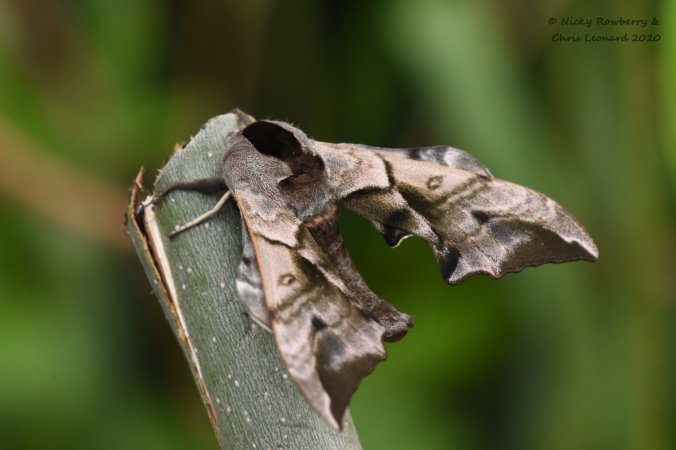 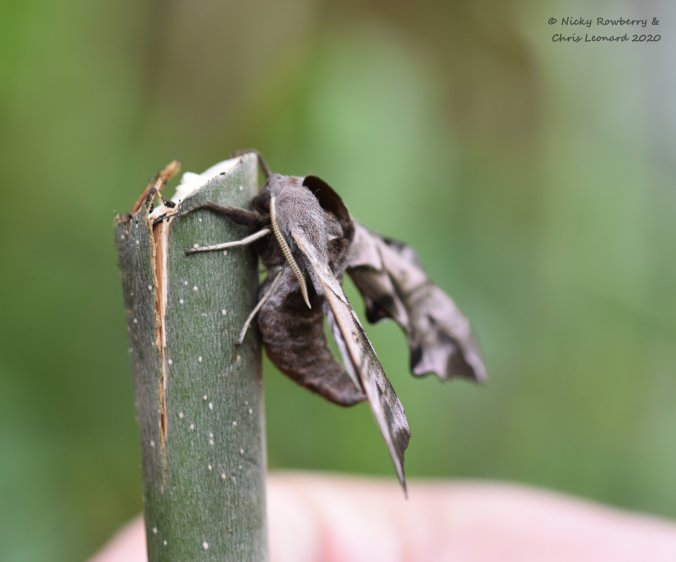 He had been raised on apple leaves as a caterpillar, so when the time came, the apple tree seemed the most sensible place to release him. I waited until it was almost dark and most of the birds had turned in for the night, then gently transferred him from his stick to some apple leaves.

He fidgeted a bit then settled down.

By this time it was getting pretty dark and I spent the next hour juggling camera, torches and tripod, trying to film George’s departure. About 21:45 he started fidgeting a bit more and even started having a good clean of his antennae, perhaps getting them in tip top condition to detect any nearby females.

He then started revving up his wings, presumably warming up the muscles which would never have been used before. I just had time to click record again on the camera.

Just before he took off, he squirted out a creamy white liquid, which I believe is the remains of the meconium (I’d had to google this) which was used to pump up the wings. Obviously there was some waste left over, so he expelled this before flight. But then he was off, free at last, circling the apple tree before I lost sight of him in the dark,

I had hoped to get a photo of the eye spots which give the Eyed Hawkmoth its name and which it flashes when threatened, but he refused to show them. I suppose I should feel good that George didn’t feel threatened by me! The best I managed to do in the end was take this still from the video.

Adult Eyed Hawkmoths don’t feed, they have no working mouth parts with which to do so. So sadly George will probably only live for a couple of weeks at the most. It may sound daft, but I felt quite emotional releasing him and watching him fly away. I had spent the best part of a year rearing him and checking on him almost daily and I did feel genuinely sad to see him go although very proud that he had made it. I just hope he finds a female (or finds a male if I got it wrong and he is a Georgina) and that our garden will be home to future generations of Georges. Good Luck George.