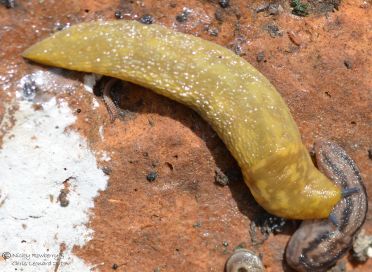 Way back at the beginning of the year (when the world seemed a very different place) I saw an article asking for volunteers to count slugs. The RHS in conjunction with Newcastle University were looking for 60 people to go out into their gardens once a month and count & identify the slugs in their own gardens. Perhaps I need to get out more, but it sounded great! Since I already spend a lot of time looking at the moths, bees, dragonflies etc. in the garden, it seemed a good opportunity to learn a bit about another group. So I applied and then lockdown happened and everything went on hold.

But eventually I heard back; they’d had nearly 3000 applicants for the 60 volunteers needed, so I feel really lucky to have been chosen. Our survey packs arrived, complete with sampling containers, slug guide and pre-paid postage envelopes (the local post office are going to love me). In an ideal world we would have all met up for hands-on training, but thanks of course to COVID, we had to do all this by Zoom.

First thing I learned about identifying slugs is that it’s really hard! They are extremely variable and they either keep moving or they scrunch themselves up so that you can’t see the bits you need to see. They’re also really hard to take photos of, because again they either keep moving or they’re shiny with slime so that the camera struggles to focus.

Splitting them into the major groups seems relatively straightforward until you get very small ones.  If the breathing pore is in the front half of the mantle (the fleshy sort of saddle on their backs) then it’s one of the Arion types like the one below.

If the breathing pore is in the rear half then it’s one of the keeled slugs like the one below. So far so good.

Originally it was all planned to start in June but in the end it was early November before we all did our first slug counts! A half hour search around the garden after dark yielded 116 slugs! And that’s without lifting anything up, or rummaging through leaves or plants – just scanning around with my head torch (neighbours once again convinced I’d lost it). So here they are before I’d sorted them out – a bucket of slugs. 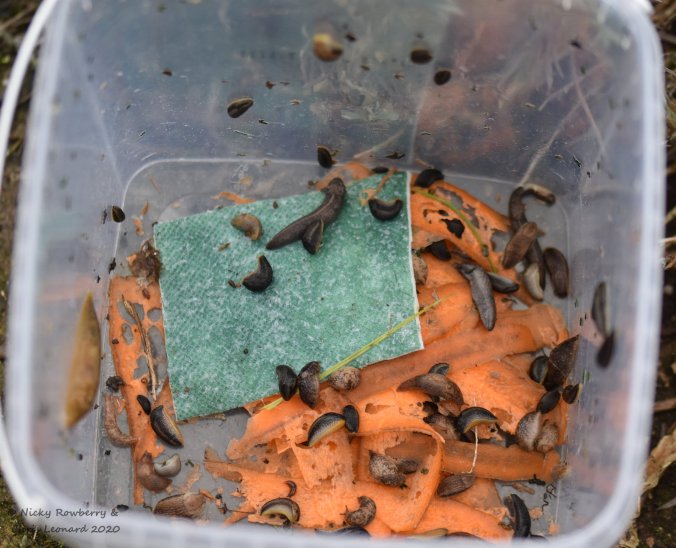 And then all potted up with their moist capillary matting to stop them drying out and shredded carrot for the journey. 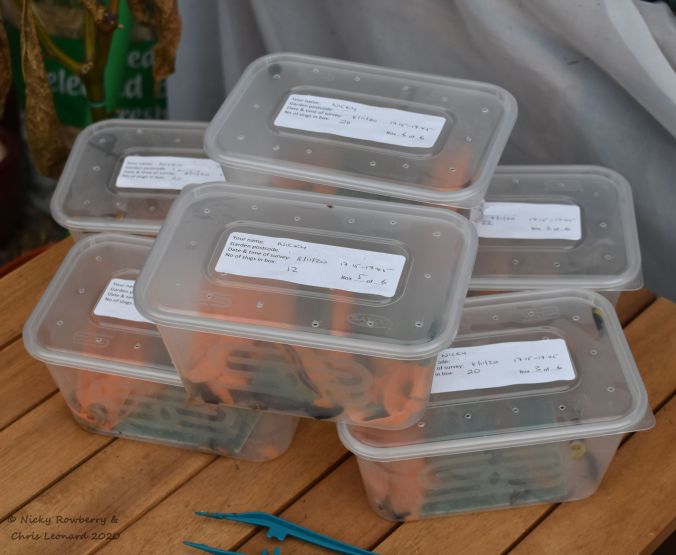 The lovely post office lady did indeed thing I was a bit odd to say the least when she asked what was in the parcels. I have since done my second count in early December; a mere 88 slugs this time. Many of the other slug count participants have been reporting only a few or even no slugs at all, but that’s clearly not an issue in our garden. I suspect it may be because our garden is so unkempt with plenty of decaying matter for them to feed on – slug paradise.

By far the commonest species so far has been Arion (Kobeltia) hortensis – the Blue-black soil slug. They’re only 2 -3 cm long, but what they lack in size they make up for in numbers; the garden is full of them.

There were also apparently some other small Kobeltia species in my samples, but I’m waiting confirmation of what those are. A few juvenile Arion subfuscus had also sneaked in undetected (by me). Differentiating between some of these is way beyond my current skills set.

The next most common species was Deroceras reticulatum, the Netted Field Slug. This is one of the slugs with a short keel. I found these short keeled slugs really hard to photograph and show the keel, so you may just have to take my word for it that there is one there. 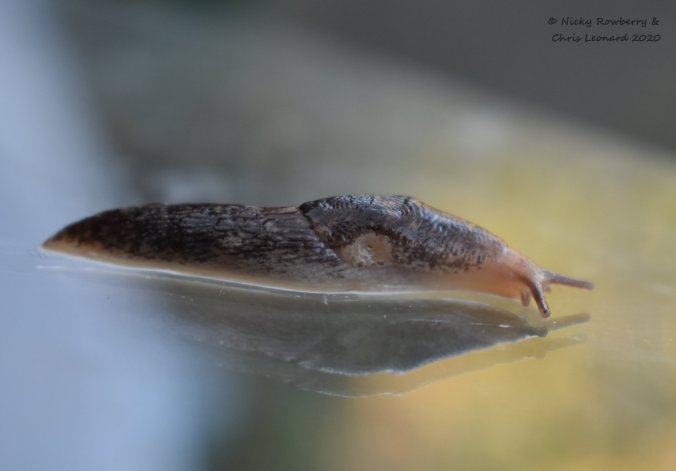 Apparently in my samples there were also some Ambigolimax sp., but since I failed to spot these as being anything different, I don’t have any photos.

I did better with 2 species of long-keeled slugs – Tandonia budapestensis – the Budapest Keeled Slug and Tandonia cristata  – the Crimean Keeled Slug. I managed some photos of the Budapest ones (below) but seem to have got so excited when I spotted the second species that I forgot to take any photos. The keel on the Budapest ones is really nice and obvious – my kind of slug! 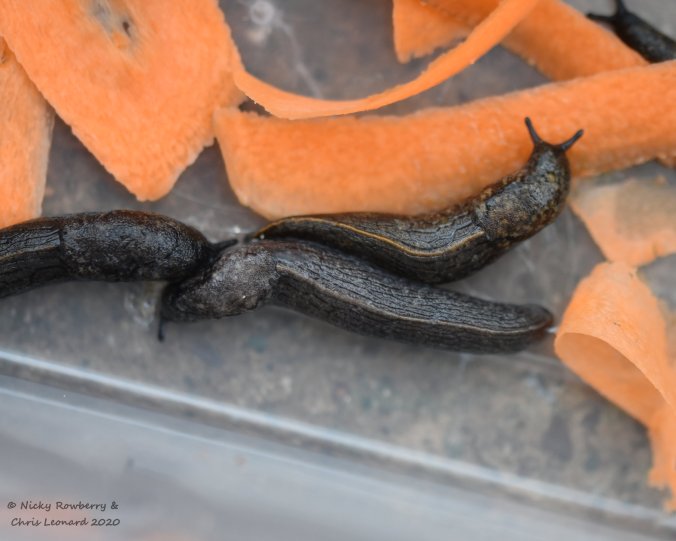 The only other species to get picked up in my half hour searches was a single Limacus maculatus – the Green Cellar Slug, although this specimen doesn’t look especially green.

The cellar slug above was by far the biggest slug I collected during the counts so far, but I know we have much bigger slugs in the garden like this giant Arion seen last summer. 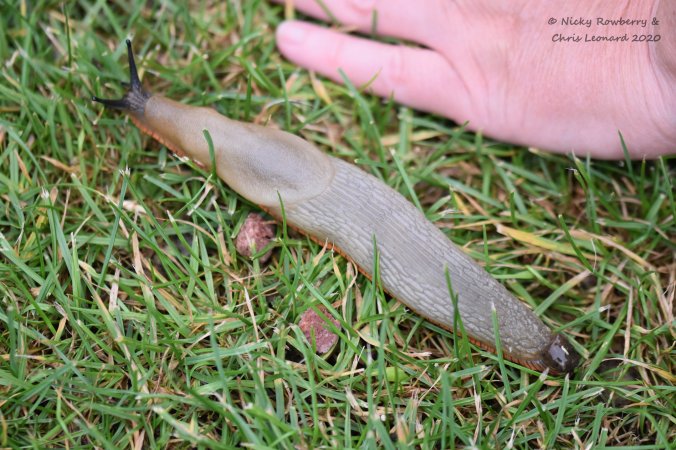 The weather is now significantly colder (first snow today) but there are still a fair few slugs out at night. Hopefully in the coming monthly surveys I will find more species new to the garden. I’m finding the whole process fascinating and it’s opened up a whole new world of wildlife to me. Hopefully the slugs in our garden and in those of the other slug count participants will help the scientists to expand their knowledge of this understudied group.