Day 4 of 30 Days Wild and today we took part in another event – the National Garden Bioblitz, thereby ticking off two targets with one activity (in true Too Lazy fashion). The aim of the Garden Bioblitz is to find and record as many species of plants and animals as possible in the garden in 24 hours.  Since we’re always identifying things we find in the garden anyway, a bioblitz is just a natural extension of that.

Last time we did this a few years ago, we recorded about 120 species; but that was before we got into moth trapping and bee identifying, so hopefully we can beat that this time.  I’m writing this late evening – we’ve been busy in the garden all day, photographing and listing everything we could find. I’ve still got loads of things to identify from the photos and then everything has to get logged onto the i-record site.

It has pretty much been the perfect day. It started at about 4:30 am when I got up to empty the moth trap (to beat the cheeky robin to the catch). Then went back to bed for a bit more sleep (always good), before resuming the challenge at a more reasonable hour. For once the sun shone on the righteous (questionable I know) and we had the perfect conditions for trawling the garden for photo ops. Pretty much the whole day was spent crawling about the garden with the cameras. We finished off by cranking up the BBQ and cracking open a bottle of Prosecco – the perfect end to the perfect day. 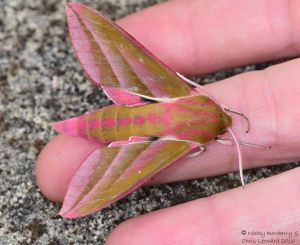 During the day we tried every trick we could think of. Obviously the moth trap had been out over night and produced at least 20 species of moth – I’m still working through the photos, so this total may rise. Highlight was the always stunning Elephant Hawkmoth.

I was also really pleased to get several Diamond-back moths – tiny moths that migrate over from the Continent. They’d been mentioned on Springwatch and social media was full of people saying they’d had loads of them this week, so I felt ridiculously glad that Too Lazy’s garden hadn’t missed out. Moth envy is a terrible thing! 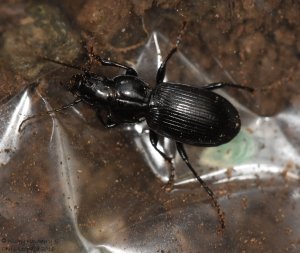 We also tried pitfall traps for the first time, using old plastic tubs buried in the ground. This produced this rather splendid (and still to be identified) beetle, plus a couple of woodlice and a spider (also still in need of ID). I suspect pitfall traps take a bit of practice in sussing the right location – we might try them again at other places in the garden.

We tried the “suspend an umbrella under a tree and wack the branches” technique as demonstrated by Chris Packham on Springwatch.  We only have the one mature tree (an apple) so this didn’t produce too much, but was interesting to try. 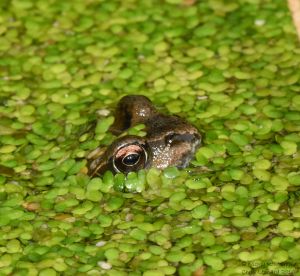 We dipped in the pond, which produced mainly duckweed, but also some leeches and water louse. It also meant we spotted one of our two amphibian species of the day – a Common Frog, watching us warily from his duckweed blanket. 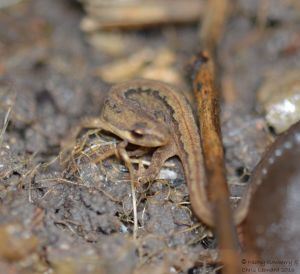 We of course turned over stones and pieces of wood, which yielded our second amphibian – the Common Newt. We also found most of our molluscan species this way, both snails and slugs. We achieved a respectable 4 species of snail, but sadly the Girdled Snail, which I know we get in the garden, remained steadfastly hidden today.

The rest of the day was spent generally bird watching and chasing various bees and insects round the garden.  I haven’t tallied up the birds properly yet, but we managed at least 10 species including this Collared Dove. At least 6 bee species put in an appearance, with possibly a new one – we spotted some kind of leafcutter bee carrying (not surprisingly) a piece of leaf – hopefully we can get an ID on it soon, although the photo wasn’t brilliant. 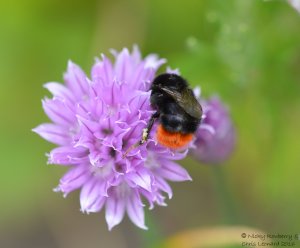 Fortunately other bees were more obliging.

Only 2 butterflies showed their faces today – a Small White and a Holly Blue. Assorted insects made up the remainder of the animal count, while the plant count is at least 25 species, with probably a few more to ID.

We’ve spent the whole day in the garden photographing our wildlife and it will probably take several days more to go through all the photos and get them loaded so that they count for the Bioblitz. But it’s been a thoroughly enjoyable experience and has got us rooting about bits of the garden, that we may otherwise ignore. We won’t know the final tally of species for a couple of days, but I’ll post an update when we do. I’d recommend having a go at a Garden Bioblitz for anyone – you don’t need to be especially skilled – just take it to whatever level  you can manage. You’re sure to learn something new and hopefully enjoy your garden all the more for it. There’s still time to do it for this year – http://www.gardenbioblitz.org/ for more information.

Day 4 of 30 Lazy Weeds and a truly beautiful if sometimes bothersome flower – Bindweed. The bane of many a gardener, but if you take the time to look at the flower itself, it really is stunning. Pure white and beautiful in its simplicity. Gardeners will plant similar looking flowers, but weed out these, which seems a shame. I know their stems do wind themselves round pretty much everything, but for me the flowers more than make up for this.

Leave a Reply to Me and My Hats Cancel reply