Embrace the rain! I decided that was my motto for today – Day 14 of 30 Days Wild. I got soaked at work about 3 times and the clouds were looking ominous over the Malvern Hills as I set off for home. So I decided rather than avoid it, I would just go for a walk in the rain. I can’t remember when I last did that (not sure I ever have)? Of course I’ve been for walks and got caught in downpours, but that’s not the same as deliberately setting out to walk in the rain. It was quite liberating in a way, knowing you are going to get wet, so no point trying to avoid it.

Having decided on a watery walk, I figured I might as well take the wet and wild theme a step further and walk along the river. Since I work on the edge of Upton on Severn this wasn’t a difficult thing to achieve. It wasn’t a long walk, but I really did enjoy it. Even in the rain there was plenty to enjoy and take photographs of – spoiler alert – there is some serious cuteness at the end of this blog!

The rain was pretty much non-stop as I walked – not torrential, but definitely constant. I loved watching the rain falling on the river and the tiny concentric circles emanating from each droplet. It was quite hypnotic and had there been somewhere to sit without getting a wet bum, I could have watched for ages.

The first wildlife I saw was a swan the other side of the river, pulling leaves off the overhanging bushes. It was a bit far away to get a decent photo, but at least it is recognisable as a swan!

I hadn’t really expected to see much in the way of insect life today, but this bee had found this patch of foxgloves and was as busy as ever. Whether he was really after the nectar or just using the foxgloves as walk in umbrellas though I don’t know.

There were lots of House Martins swooping low over the river, presumably catching insects over the water. They were virtually impossible to photograph as they were just too quick. The best I managed is a (very) brief glimpse of them in this video flying past a duck that was progressing more sedately down the river.

A wagtail kept me company on the walk, tail bobbing up and down as it searched for insects (or possibly for food dropped by the riverside pub customers!) Shame that in the only half decent photo I got of him, he was standing on what looks like astro-turf rather than somewhere more scenic! 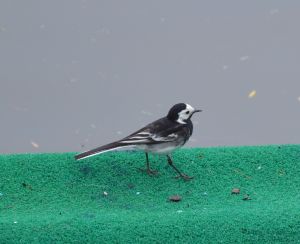 But of course it was the ducks that were really the stars of my watery walk. There were a few cruising up and down the river – I love the bow wave that has formed around this one as he paddles serenely up stream.

Quite a few though were just sitting on the bank – although it was supposedly “nice weather for ducks” today, they didn’t actually look that happy about it.

I think these were all Mallards – they may be common ducks, but the colours on the males in particular are absolutely stunning.

I was just starting to head back to the car, when a group of people peering over the edge of the river wall waved me over. Baby ducklings – what can I say, but serious cuteness overload! There were 5 in total, paddling about with their Mum. I could easily have loaded dozens of photos of them here, but have restricted myself to just the two.

I couldn’t resist trying to video them as well. They may only be small, but they’ve clearly got the hang already of rummaging about in the weeds for food.

I’d guessed that I’d probably see ducks today in the rain; but to find ducklings was better than I could have hoped for – the perfect end to my walk. 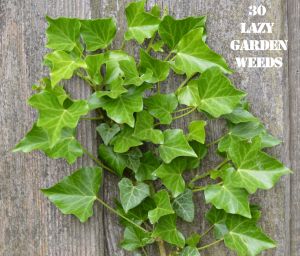 And finally the latest weed in my 30 Lazy Garden weeds is Ivy. Beautiful glossy leaves, covering up our ugly fence – evergreen, so brightening up the area all year round. Ivy is particularly good for insects, providing not only cover and homes, but the flowers provide much needed nectar when there’s little else around. Moths of course absolutely love Ivy – so for that reason alone it would get my vote!