Today was all about the colour purple! We went in search of the Purple Emperor butterfly (affectionately known as His Imperial Majesty by butterfly enthusiasts) and found not only him but Purple Hairstreaks too! Since we first got into butterflies, the Emperor has been one of the species we’ve most wanted to see. It is not only one of our largest British butterflies, but arguably one of the most beautiful. We did go looking for it last year, but sadly saw just one lonely little wing on the ground, so today we set off hoping for better and all our butterfly dreams came true.

We’d seen that Butterfly Conservation Warwickshire had an organised walk at a site with Purple Emperors today, so we went along with fingers crossed. Almost immediately the walk leader announced there were a pair of Emperors up the path. Our group charged into the wood, but as usual Chris and I got side-tracked by other species (Purple Hairstreaks and Silver-washed Fritillaries), so missed them. Our expert though soon spotted another one in a tree and we got a few distant grainy photos. Our very nice walk leader then suggested that we could either stay where we were and would likely see some Emperors or we could go with him on the official walk. Chris and I decided to take our chances and stay put. (it wasn’t just laziness, honest!) No sooner had the group disappeared over the horizon into the wood, but a Purple Emperor landed right by my feet. Once I’d managed to splutter out a shout to Chris, we then took a lot (and I mean a lot) of photos. So here are some of our best, starting with a wobbly video of His Majesty.

The males come down in the mornings to gets salts and minerals from wet mud or in this case dog poo (not sounding so imperial now!) This one was so into his breakfast that he stayed for ages while we snapped away.

Only the males have the purple sheen to the wings and even then it depends on how the light catches them. Sometimes the wings look almost black, other times just one wing glows blue and just occasionally when the angle is right both wings shine gloriously.

In these last 2 photos you can really see him sticking his proboscis into the dried up poo – each to their own! 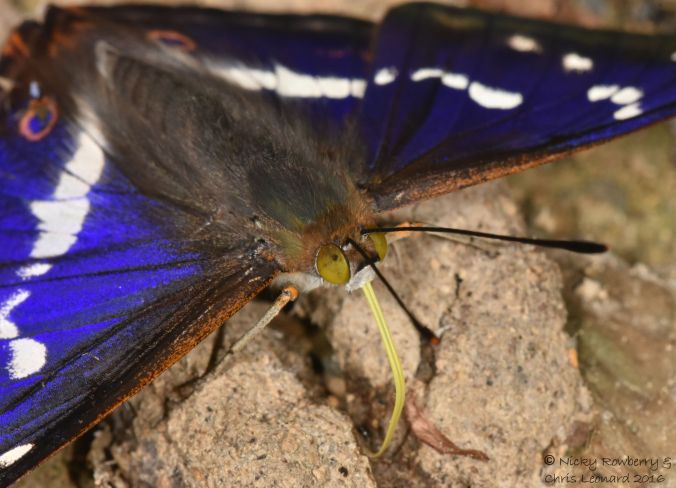 There is probably only one thing better than seeing a Purple Emperor – seeing two! Unfortunately I had wandered off chasing another butterfly, but Chris managed to get two together. Not great photos as the second one didn’t hang around – probably flew off in search of a dog poo of his own.

We’d spotted a Purple Hairstreak as we first entered the wood and got a few typical shots of it with its wings vertical. This is a very small butterfly compared to the Emperor and spends most of its time up in the trees, so is easy to miss.

On the way back to the car, we spotted another one. We were delighted when it opened its wings and then even better settled on the ground allowing us to snap away. We’ve never seen these with their wings open before, so this was a real treat. 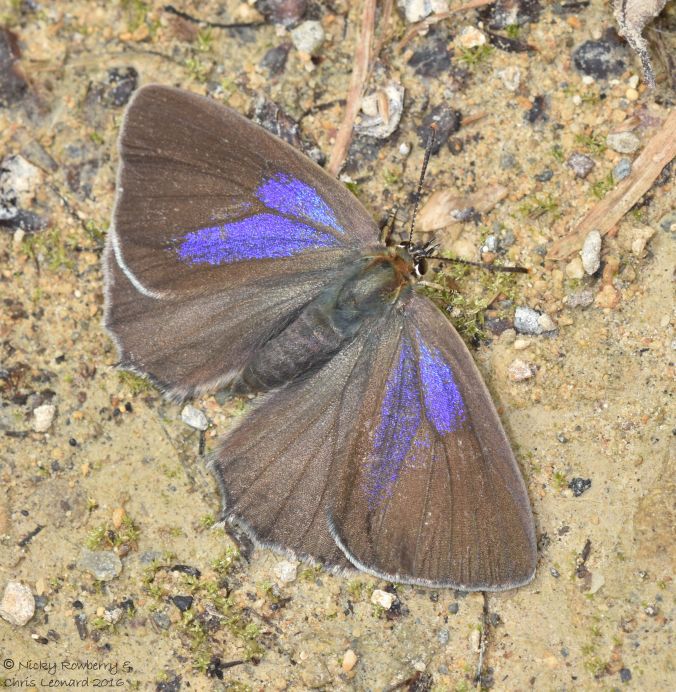 But all these purple beauties weren’t the only butterflies around today. We saw lots of Silver-washed Fritillaries, most of which were bombing about way too fast to get a photo, but one or two did settle long enough. 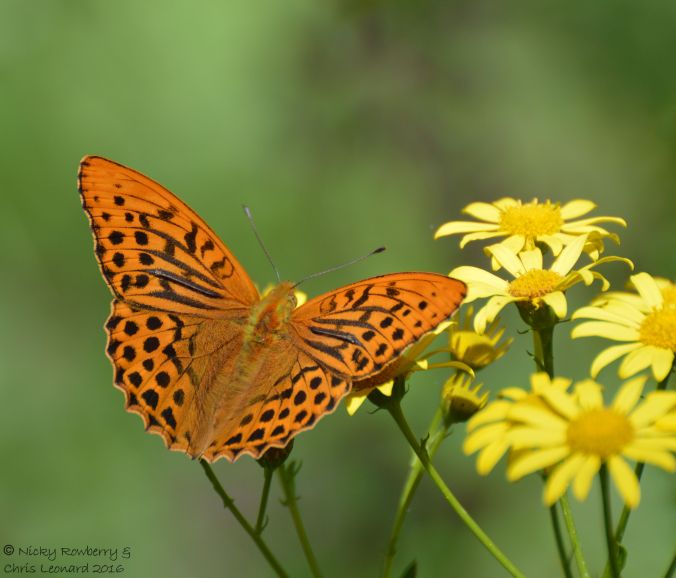 Just before we’d spotted our Purple Emperor we saw this White Admiral. We got all excited thinking it was the Emperor as they are pretty similar, although obviously lacking the purple sheen. Brambles must be the Admiral’s favourite flower, as we often see them on these. 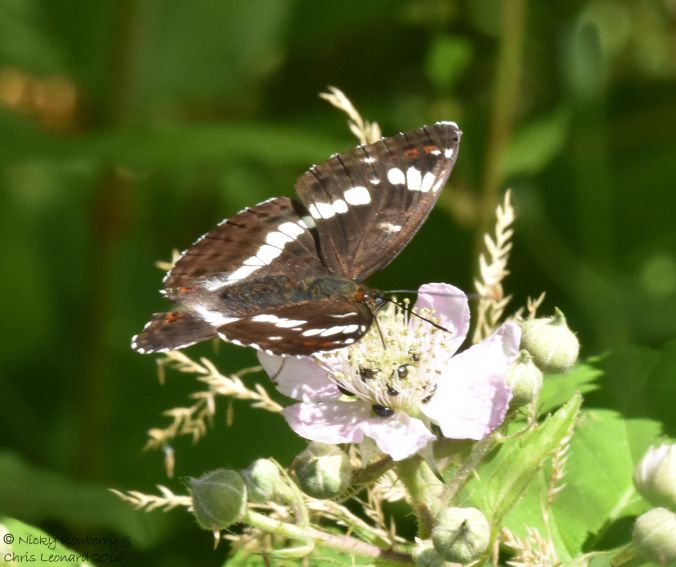 Also spotted today were lots of Ringlets, Speckled Woods, some kind of very fast and consequently unidentified white and last but not least several of these Large Skippers.

I think today will go down as one of our most successful butterfly walks ever! Thank you Butterfly Conservation Warwickshire for organising the walk and making our Imperial dreams come true!

4 thoughts on “His Imperial Majesty – The Purple Emperor”