Today we decided to explore our local patch – so often it’s your local stuff that you ignore, thinking somehow that the grass is always greener (or the wildlife more exciting) elsewhere. But the Malvern Hills are not only beautiful, but a fantastic location for wildlife. We forget sometimes how lucky we are to live here.

We’ve been concentrating a bit lately on “bagging” some new butterfly species and had so far added 5 this year to our lifetime list. But there is one species we’d never seen that has a colony almost literally on our doorstep – the Grayling butterfly is found on the Malvern Hills, less than a mile from our house. The Grayling is now a priority species for conservation as it is in decline over much of its former range. The Malvern Hills Conservators are making great efforts to protect our local population and improve the habitat. So we set off today in the hope of seeing our local speciality.

The Grayling likes areas of bare rock and short grass. We headed up the hills following the path recommended by the West Midlands Butterfly Conservation guide and having reached the favoured location, Chris spotted one almost immediately sunbathing on the rocks.

The Graylings aren’t as flashy as the Purple Emperors we saw earlier in the week, they are more subtly beautiful. They are also masters of disguise and when they keep still they blend into the surroundings extremely well. We were lucky to spot this one. Fortunately it was intent on sunbathing and was also close to the path, so we got our usual bucket-load of photos. 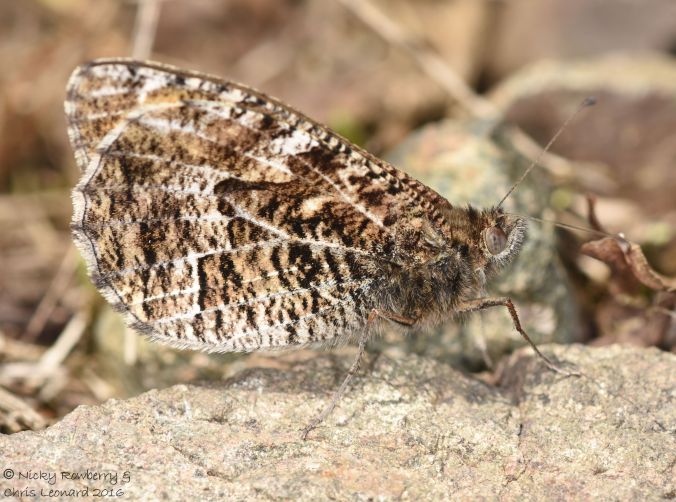 The Graylings almost always sit with their wings upright with the forewing tucked behind the hindwing, which makes them look much smaller than they really are. We watched this one for ages and eventually while it was shifting position, we managed to get a shot with its forewing at least partially showing.

We saw at least 2 other individuals on our walk, all basking on rocks. Lots of people walked by us and the butterflies while we were there, but I don’t suppose many of them realised what they were missing!

Feeling flushed with success (and also a good lunch at our local), we decided to try our luck back down on the flat ground at the edge of Malvern. There’s an area of rough ground by the road that is always good for butterflies and today was no exception. The Marbled Whites were out in force. Unfortunately it was extremely windy so although they were landing close by, the grass was blowing about so much it was hard to get decent photos. Here are a few of our better efforts.

There were several pairs dancing about in the wind, so I had hoped to get a mating pair. This was the closest I managed – not ideal, but at least there are two of them in one shot!

Marbled Whites weren’t the only butterflies around – Meadow Browns were particularly abundant.

There were also lots of Skippers – I think the top one is an Essex Skipper and the bottom one a Large Skipper, but happy to be corrected? Again the wind was blowing them about an awful lot, making the photography tricky. (excuses, excuses!)

As we headed back to the car, Chris spotted this day flying moth – a Mother Shipton. Really pleased to see this, as I’m pretty sure I’ve only seen it in books before. It is named after a 16th century witch because its wing markings look like an old crone with hooked nose and chin!

And finally a cricket. Not that this really fits in with the rest of today’s post, but it was such a nice photo it seemed a shame not to include it. And also I really like crickets!

One thought on “Malvern Meanderings”